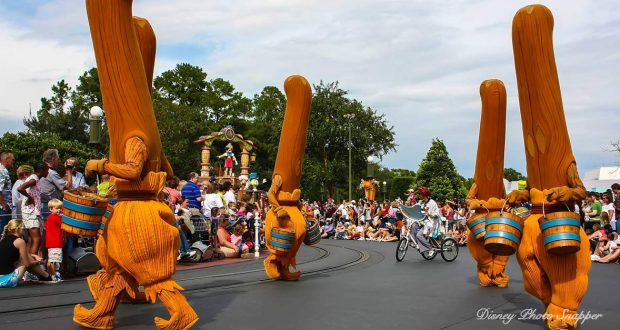 5 Things We Love About Disney’s Festival of Fantasy Parade

5. The Soundtrack – A soundtrack can either make or break a parade/show, and in this case it truly enhances the parade. Not only is it catchy and makes you want to sing along, but also it’s uplifting and has such a positive effect on your mood! However, be warned—once you listen to this soundtrack, you will be hooked forever!

4. The Parade Route – While Disney’s Electrical Parade starts on Main Street and makes its way through Frontierland, Festival of Fantasy starts in Frontierland and ends on Main Street—and we like this so much better! The reason we love it this way is because if you watch the parade along Main Street, the pictures you get will be absolutely breathtaking with Cinderella Castle in the background! In addition, if you watch at the beginning of the parade route, it makes it a lot easier to get to different parts of the park immediately afterward, whereas trying to leave Main Street and get to a different section of the park after a parade is a little harder.

3. The Costumes – Disney always goes above and beyond when putting on any kind of show or parade, but they really outdid themselves with this one. The costumes will make you gasp and take a million pictures—I promise. They designed costumes that match the theme of the floats, and the stories the floats were inspired by, perfectly! My personal favorite is the floral maiden costume that goes with Rapunzel’s float!

2. The Floats – Once again, Disney set the bar high for parades and entertainment for theme parks. I’ve only seen a handful of parades at Disney, but these floats are some of the most impressive Disney has ever put together. They capture the stories of the characters perfectly; they are colorful and big enough so that even if you aren’t standing in the front, you still get a good view. I could take the same pictures of the same floats over and over again and not get bored because they are that amazing.

1. The Characters – We know why you stand in the Florida heat in a crowded Magic Kingdom in the middle of the afternoon—to see characters! This parade is chock full of beloved Disney characters from Cinderella and Prince Charming to, my personal favorites, Rapunzel and Flynn Rider! There are even some characters that travel the parade on foot, like Alice in Wonderland, Snow White and the Hundred Acre Wood gang. There are plenty of opportunities to take pictures, blow kisses or even shout ‘I love you’ to your favorites. And, if you’re lucky, they may even acknowledge you!

For me, no trip to the Magic Kingdom is complete without seeing Festival of Fantasy. It’s whimsical, enchanting and it truly puts you in a world of fantasy. From the costumes to the floats to the music and the lovable characters, you will be smiling from ear to ear the entirety of the parade and wishing it was longer when it finally comes to an end. During your next trip, be sure to check it out and find out for yourself why it has become a guest favorite!