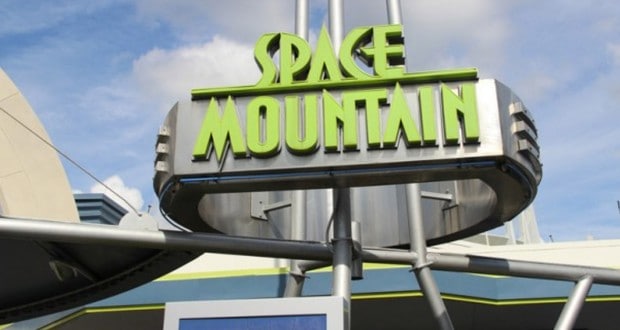 6 Reasons Why We Love Space Mountain

Space Mountain is one of my favorite rides in all of Disney World. It offers family fun, superb theming, and an element of thrill. Here are 6 reasons why Space Mountain remains one of the most popular attractions in the Magic Kingdom.

People like what they know, so classic rides are often among guest favorites. Space Mountain has been around for decades. It first opened at the Magic Kingdom in 1975. The popularity of the Matterhorn Bobsleds (also a coaster) at Disneyland is what convinced Walt Disney that thrill rides belonged in Disney parks. As a result, he began to plan a space-themed roller coaster for Disneyland, but the project was tabled while Disney World was in the works. The project was later revisited following Disney World’s opening.

Fun fact about The Magic Kingdom’s version of Space Mountain: It’s actually the only park attraction that falls outside the perimeter of the Walt Disney World Railroad.

5. Because it feels so out of control (in a good way)

Have you ever felt like you’re going to hit your head or go flying off the tracks on Space Mountain? I know I have, but I think that’s part of the fun. You know that Disney’s rides have an excellent track record of safety, so while it may feel out of control, you probably have enough faith that it’s safe to make the feeling thrilling, not scary. I imagine that dogs who stick their heads out car windows enjoy this same thrill!

Or is it? Actually, the cars on Space Mountain only travel at a shockingly slow maximum speed of 28 miles per hour. The darkness, hairpin turns, and flying asteroid effects make it seem much faster, don’t they?

If you’re traveling with a multi-generational group on your vacation, there’s a decent chance that grandpa, dad, and daughter will all want to ride Space Mountain, and all will thoroughly enjoy it. It has just enough of a thrill factor to make it a favorite, but it’s tame enough for the less-brave in your party to conquer. Of course, people who are strictly non-coaster people might still refuse it, but there’s definitely a wider audience for this coaster than any other at Disney.

2. You might not even mind waiting in the queue

This is one ride where I actually feel slightly cheated when I zoom past the guests waiting in the standby line with my FastPass+ reservation. The galactic-themed queue has been updated and is full of interactive, space-themed games. Another bonus of this queue- it’s inside, and it’s cool and dim. If I’m going to wait on line for a ride, this is where I want to wait.

1. Because there’s always that slight chance that the lights will come on

Have you noticed that Space Mountain is down very often, sometimes several times a day? When I realized this, it occurred to me that being on the ride during a “down” period is a real possibility. As a professional worrier, I have run through this scenario in my mind and have even researched what happens in the event that Space Mountain breaks down while I’m on it. I’m terrified at the idea of it, but if I’m really honest with myself (and you), I kind of want to be on it when it breaks down. Who doesn’t want to see Space Mountain fully lit up? I’ve had the very cool experience of riding the People Mover, which briefly passes through Space Mountain, when Space Mountain has been down with the lights on, and it only left me wanting to see it again! If you’ve seen this, then you may have been surprised to see that the track is actually quite squished together in a fairly small area.

In case I’ve got you worrying now, too, a Space Mountain breakdown isn’t a very big deal. The cars will roll to a stop. A Cast Member will come to your aid and manually push your car, which will glide down the rest of the tracks on its own. You’ll have assistance in being evacuated from there.

I hope you enjoyed our 6 reasons why people love Space Mountain. Is it one of your favorite rides? If so, why do you love it? Did your reason make our list? Feel free to add your own reason in the comments section!