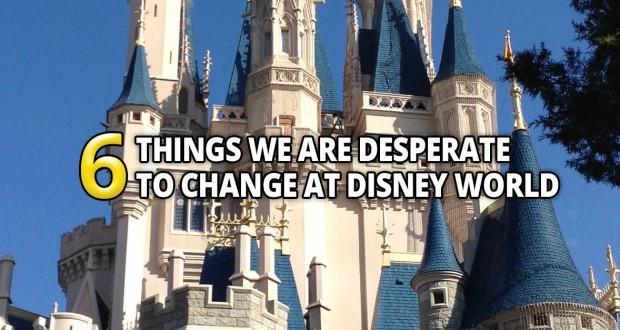 6 Thing We Are Desperate To Change At Disney World

6 Things We Are Desperate to Change at Disney World

There’s nothing about Epcot’s Future World that seems very futuristic anymore. Built in 1982 and not updated much since, Future World could be so much more interesting if it was revamped to reflect more modern technology. Our current reality- smart phones that talk to us, automatic vacuuming robots, GPS everywhere- is much more “futuristic” than Future World, which feels sort of ancient.

5. Journey into the Imagination

I know I can’t be the only one who is desperate for a reincarnation of the original Journey into the Imagination! One ride on the updated version leaves me longing for the days when Dreamfinder was still there. For that matter, it would be nice if they’d open up the whole second floor of the Imagination pavilion again so we could explore and enjoy it once again. It’s incredible that, despite outcry over the deletion of Dreamfinder and general consensus that the ride isn’t very good anymore, people still love Figment. Figment merchandise is popular, and people continue to be loyal to Figment despite not really enjoying his attraction. The character is so charming that, despite a somewhat tragic overhaul of his attraction and the awful skunk smell you have to endure in the ride, he still comes out on top. I’m coining the term “Figment Phenomenon” for this one!

This is another example of what I dubbed the “Figment Phenomenon” in #2 above. Stitch is a true fan-favorite character. There are plenty of die-hard Stitch fans, as well as casual Stitch admirers. Despite his overwhelming popularity, people hate this attraction. Sure, there are people who like it, but the consensus seems to be that people don’t just “not prefer” the ride; they actually loathe it. Just like Figment, Stitch is loveable and deserves a good attraction to call his own. Also like Figment’s ride, the terribleness of Stitch’s Great Escape is punctuated by a disgusting smell (thanks for the hot-dog burp, Stitch).

In all fairness, the previous attraction in this space (Alien Encounter) was pretty scary, and at least Disney tried to recycle it in some logical way without building an entirely new attraction.

I’m giving in to my impatient, 6-year old inner self on this one. There’s plenty of waiting to be done in the parks; can we have a few more busses to ease the wait at bus stops? Some stops aren’t really an issue, but at the end of the night the waits can be long. Additionally, there are certain routes that seem plagued by long bus waits. If you stay at Animal Kingdom Lodge, you may notice that you wait longer at times for a bus to come since you are farther from the parks. Even worse- have you ever ridden the bus that services the Boardwalk, Yacht Club, Beach Club, Swan, and Dolphin headed to Downtown Disney? If you have, you surely have longed for more buses on the route.

I’m sure that Disney has a lot of detailed, logistical data supporting the current ride reservation system that is FastPass+. I won’t even go as far as to say that I don’t personally like FastPass+. On the contrary, I’ve had great success using both the old paper FastPass system, as well as the current version. The reception of FastPass+, however, has not been all positive. I think everyone would love to see more FastPasses available each day, and the ability to make ride reservations in more than one park per day.

There are lots of things about Hollywood Studios that take some criticism from time to time. The Great Movie Ride could surely use an update to include some newer films, and the park in general needs some more attractions to help disperse crowds. Luckily, it looks like some changes are coming to the park. Like it or not, the Sorcerer’s Hat is being removed. Rumors of a greatly increased Star Wars presence seem to be valid, and the outdated Backlot Tour has been closed in anticipation of new additions to the park. Perhaps some great changes are on the horizon!

What areas of the Disney parks are you desperate to change? Are there rides that you just can’t tolerate anymore? Do you long for new shows, park expansions, or new ways of scheduling rides and meals? Share your ideas in the comments section. Who knows, you might just be on to the next big idea!