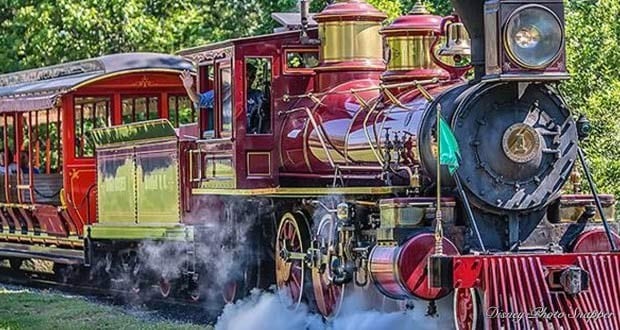 One of the great reminders you are in the happiest place on earth is the sound of the train whistles of the Walt Disney World Railroad. Riding the rails is a can’t miss experience at the Magic Kingdom and here are just a few reasons why:

7. Walt Disney had a personal passion for trains! One of Walt’s earliest jobs was selling print and snacks on various railroads. Though he recalled that his “railroad career was brief, exciting, and unprofitable,” trains would be important fixtures in his life. Walt first drew Mickey Mouse after a devastating visit to New York on a train ride back to California which set in motion a culture shaping career. Walt would later build a backyard ride for his girls but knew he wasn’t done designing railroads. In the earliest concepts of Disneyland, Walt is quoted as saying that the park “looks like nothing else in the world, and it should be surrounded by a train.” Every Walt Disney park has at least this in common – they all feature railroads.

6. The WDWRR at the Magic Kingdom is a 1.5 mile storytelling device! More than simply a transportation vehicle between lands, the locomotives were designed to immerse guests (over 1.5 million a year) in the American experience at the turn of the 20th century. As you travel from one land to the next, the narrator helps set the stage as you pass through Adventureland before your stop in Frontierland, directs your attention to several rustic features before the stop in New Fantasyland and makes mention of Tomorrowland attractions before rolling back into Main Street Station.

5. The locomotives are steam-powered! The tender, or car located right behind the locomotive, holds the fuel and water necessary for circling the park. Even with a capacity of almost 2000 gallons of water, you might have to wait a little longer at the New Fantasyland station, because every three or four grand circle tours, the tender must be refilled.

4. The four trains used at the Magic Kingdom all have significant names! The number 1 locomotive is aptly named, Walter E. Disney, and features a red body and cab. The Lilly Belle (number 2) is named after Walt’s wife Lillian and has mainly been used for the Magic Kingdom opening ceremony that transports the characters to Main Street Station. This locomotive has a green body and cab. The number 3 train is the Roger E. Broggie, named after the Imagineer responsible for acquiring the locomotives and who helped Walt build the one in his backyard. It has a green body and red cab. Locomotive number 4 is the Roy O. Disney, named after Walt’s older brother who worked the business side of all Walt’s endeavors. Keeping with the theme, the front boiler casing is red with a green cab.

Both the number 1 and 3 trains (W.E. Disney and R.E. Broggie) were made at the same time in 1925 and in succession, as evidenced by their sequential serial numbers: 58444 and 58445 respectively. Cast members have affectionately termed these, “the twins.” Generally, two trains are in service each day unless it gets busy and a third is added in the rotation. Look closely next time you board and determine which one you’re riding!

3. The WDWRR features exclusive show scenes! Naturally, as you pass through the different lands of the Magic Kingdom, you would expect to see portions of attractions from a different angle. Some of these include an better glance at Big Thunder’s flooded town of Tumbleweed, the finale scene from Splash Mountain (through the glass in the tunnel approaching Frontierland Station), the Circus elements of New Fantasyland, and the Tomorrowland Speedway. I won’t spoil it for those who haven’t ridden, but after departing Frontierland, keep an eye out for many different forms of wildlife and some long term residents camped out in the forests behind New Fantasyland.

2. The whistles you hear are important! You might think that the consistent loud whistles you hear in the Magic Kingdom (and even at the resorts surrounding Bay Lake) are for theming purposes and ambiance. These, however, are communication tools for the train conductors as they navigate around the park. The short or long ‘blows’ patterns tell when a train is approaching a station, making a general greeting, in forward or reverse motion, and if there happens to be an emergency. Ask a conductor or cast member to translate so you can learn what the trains are saying to each other!

1. You can take a behind the scenes tour! Disney’s Behind Our Steam Trains Tour is a three-hour glimpse backstage at what it takes to keep these marvelous engines operational at the Magic Kingdom. Part of the tour actually includes a walk-through of how the trains are prepared for that day’s service. Park admission is required and costs an extra $54 per person.