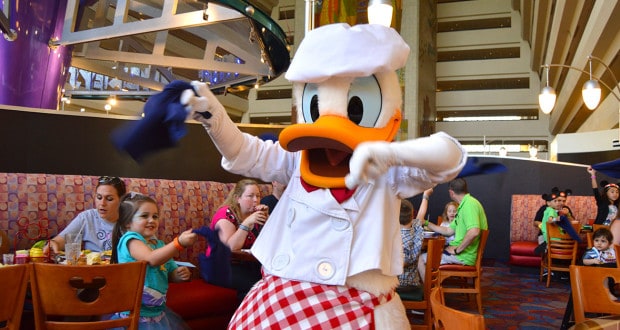 Not happy with your job? Want to do something that makes people happy every single day? Then get yourself out of your depressing job and make it down to Disney World to become a character at the parks. What could be more fun than that?

7. Get Paid To Get Your Picture Taken

As a Disney character, your job is to smile, greet park guests, sign a few autographs, and get your picture taken over and over. And you get paid for it. While smiling continuously may be a bit straining on the face, it doesn’t require heavy lifting, handling customer complaints, or dealing with a pile of paperwork. Just greet, sign and smile. That’s not too difficult, right?

6. Every Day Is Different

If you’re someone who gets bored easily by routine, then quitting your job and becoming a Disney character works in your favor. With different locations in the four parks, depending on your character, and the chance to interact with guests all day, you can be guaranteed something new each day. Each guest whether they be child or adult will respond to greeting a character in their own unique way. This can keep you on your toes, but in a fun and friendly way.

Whether you get to be a face character (like the princesses) or a furry character (like Pooh), you still get the chance to dress up as someone else and play pretend for a living. Part of Disney’s character training includes watching your given movie, studying the character’s mannerisms, and stepping into that character’s shoes, literally, to bring him or her to life. From movie quotes to diction, these character actors need to have everything about their character down to perfection. Then it’s on with the show!

Disney characters aren’t found in cubicles. They don’t sit at a desk and answer phone calls or type emails. They’re out and about. They’re in restaurants, in parades, in their own little corner of the park, or they’re walking around outdoors. Ditch the stuffy office and become a Disney character who gets to play around in a variety of settings. Some characters even get to hop on the rides with park guests. It’s just all part of the job.

3. Work At The Happiest Place On Earth

As a Disney character, by default you get to work in Walt Disney World. You’d have the opportunity to move to Orlando, live within the Disney bubble, and get Disney all day every day. If you’re someone who can’t get enough Disney, this is the perfect work environment for you. Not everyone can get away with listening to movie soundtracks from the films while working in their office, but at Disney it’s almost a requirement. You’ll also get the chance to live near other Disney character actors and share your love of the parks and movies with like-minded people.

Of course, as a Disney employee, you’re automatically qualified for magical Disney parks perks. This can include free park passes for yourself, family members and friends, discounts on Disney dining and even discounts on select Disney cruises. While the pay rate may not be equal to what you’re earning now, the amount of money you’ll save in discounts is worth noticing. Imagine being able to visit the Magic Kingdom or Disney’s Hollywood Studios for free on your days off.

1. The Ability To Bring Joy To Guests

Perhaps the best reason to quit your job and become a Disney character at Disney World is the chance to make thousands of people happy. Whether you’d get to be a princess, a pirate, or Piglet, you’d have the ability to make guests young and old smile and forget about their troubles for a while. Even the older crowd can get sucked into the illusion that they’re talking with a real Disney character and not an actor. If you’re current job doesn’t give you that capability or that feeling of accomplishment, you may want to consider relocating and practicing your lines.

Becoming a Disney character can be a dream come true for the right person. It can be a way to spread smiles, encourage dreams, and make people believe that anything is possible. How many jobs can you think of that inspire the same feeling?

For more information on visiting Disney, whether it’s to retire there or just vacation, onsider planning and booking your next Disney trip with an Authorized Disney Vacation Planner you can trust like Mickey Travels. They’ll help you get the best Walt Disney World deal, share expert advice and their services are totally FREE! It’s genius!