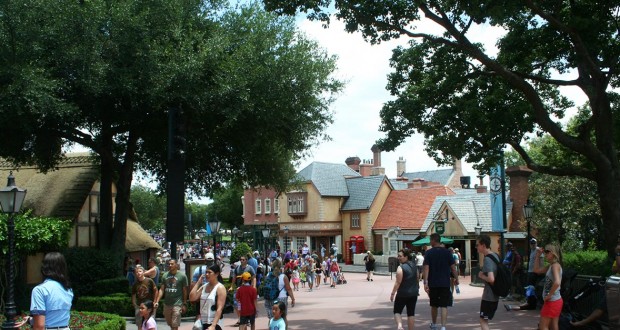 7 Sensational Facts About The World Showcase

1. Despite original intentions, most of the pavilions are not funded by their home countries.

Walt Disney World intended for countries to pay for the construction and maintenance of World Showcase pavilions for a 10-year land lease period. Disney suggested that it would be beneficial to countries to sponsor the pavilions because they would see increases in tourism. However, they quickly found that countries were not interested in this type of deal. Instead, Disney relied on corporate sponsors, such as Coca Cola and Mitsokushi. When Norway was added in 1988, several companies footed the bill, as well as the Norwegian government. Morocco, built in 1984, also had the backing of its home country. Norway and Morocco, however, are the exceptions- the rest of the countries were not backed by their national governments.

Morocco is one of the few countries that was interested in funding a pavilion at Epcot. The king of Morocco was reportedly very enthused about participating and sent 19 of his own designers and builders to construct the intricate architecture of the pavilion. Wondering why there are cracked tiles in some of the mosaics, despite the fact that Moroccan designers themselves created them? It’s because the Muslim culture believes that only the god Allah can create something perfect; hence, purposely imperfect tiles were used to create the art.

Another interesting tidbit about Morocco: it is the only country that does not light up during IllumiNations. Why? Morocco is a predominantly Muslim country, and the main tower of the building in Morocco is a replica of a prayer tower. Lighting the prayer tower at night would be a violation of Muslim beliefs.

France demonstrates a great example of Disney’s use of forced perspective. The Eiffel Tower replica is much smaller than it appears! In fact, Disney is so concerned about revealing how small it really is that they supposedly use bird repellent on the structure because a bird perched atop the tiny tower would give away the illusion! (Too bad they couldn’t do anything about the giant swans hovering near it, though. See fact #4!)

4. Out of place landmarks

If you look at the countries from across the World Showcase Lagoon, you might notice some buildings that look very out of place along the skyline. For instance, the art-deco inspired Swan and Dolphin resorts are all-too-visible next to France’s Eiffel Tower. The giant swans, huge dolphin, and even more enormous triangular shaped façade are distracting against the rest of the skyline.

Here’s a strange fact for you. Disney brings in water to the Italy pavilion from Pennsylvania, because it is most similar to the water in Naples, Italy. The idea is that using a very similar water source in the Via Napoli pizza dough makes it more authentic.

6. Strolling the World Showcase is good for your health!

Taking a stroll from one end of the World Showcase to the other will give you about 1.2 miles on your pedometer. Of course, if you’re like me, you probably consume a lot of food and drink in that 1.2 mile walk, offsetting the health benefits!

Currently, the World Showcase is home to 11 country pavilions. There is actually room for 6-10 more, depending on a few factors. There are 6 full “wedges” of land around the World Showcase lagoon that are unused, save for a few service sheds and other items you don’t see while strolling along. Take a look on Google Earth and you’ll notice spaces between most of the countries. There is also plenty of space on either side of the American Adventure to add countries, bringing the total spaces available to 8. There’s also space for two more countries if Disney were to decide to use the space by the International Gateway entrance, or the event pavilion space between Canada and the United Kingdom. The latter, however, is extremely unlikely, because special events like the Flower and Garden Festival and the Food and Wine Festival bring big crowds to Epcot. The special events pavilion is used during those times.

I’d be thrilled to hear of a new addition to the World Showcase, but I’m not holding my breath. Despite announcing the upcoming additions of Venezuela, Spain, Israel, and Equatorial Africa in the early 80’s, Disney hasn’t actually added a new pavilion since Norway in 1988. In the meantime, we’ll just have to enjoy all the cultural goodness of the World Showcase as it is.