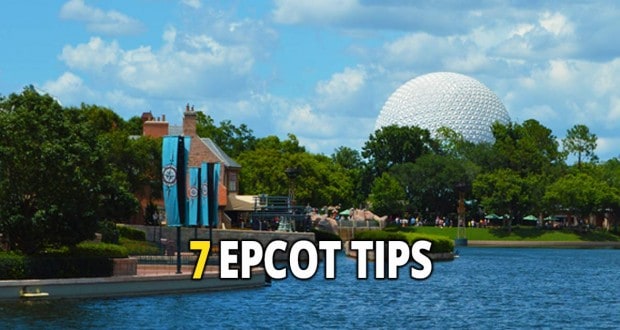 Epcot is a massive park, so you’ll want to carefully think about how to spend your time there. There’s a lot to do during the day, but it also can’t be missed at night! There are many great attractions in Future World, and a lot of things to experience in the World Showcase as well. I love spending two days at Epcot. If you are on a longer trip and have the ability to visit it over 2 days, then you can modify your plans slightly and worry less about getting to certain attractions in the morning. Here are our general tips for making the most of your day at Epcot.

7. Arrive at rope drop, and walk quickly to Soarin’ or Test Track.

I’ll recommend arriving at rope drop (park opening) for every park, every day. At Epcot, it’s especially important if you want to experience both Test Track and Soarin’ on the same day without major waits in line.

Whichever attraction you did not make a beeline to in the morning should be your Tier 1 FastPass for the day (Soarin’ or Test Track). If you are visiting Epcot twice during your trip, then you can easily use FastPass+ for Soarin’ one day, and Test Track the next. This makes arriving at rope drop slightly less important as well. As for your Tier 2 attractions, you have several choices. If you are interested in Mission:Space, that is a good use of FastPass because it often has long lines. You may want to use your second for Spaceship Earth (which sees longer lines in the afternoon), or The Seas with Nemo and Friends. The rest on the list rarely have long lines, other than during peak times.

5. Which attractions are most popular? Know before you go!

This is a prudent tip for a visit to any park, but having an idea of what Epcot has to offer before you go is crucial because of its large size. Don’t leave a Future World attraction, and then slowly walk through the World Showcase discussing what your next stop will be. If you do that, you may find yourself in Germany wanting to get to an attraction that is near the park’s main entrance. Criss-crossing Epcot is a tiring endeavor, so being somewhat efficient in your park touring is recommended. Also, don’t spend morning hours on something that rarely has lines. Heading into Ellen’s Energy Adventure at 10am because it’s right in front of you, and then coming out 45 minutes later to find that the lines for your next stops are huge, would be very unfortunate. Tempted to rush to Figment’s ride at 9am because you love him? Well, you’ll have a long time to think about your devotion to the little purple guy while you wait an hour to ride Test Track. You’ll want a background on what’s most popular to avoid situations like that.

Future world hosts a variety of attractions. The most popular is Test Track, a thrill ride and major park headliner that sees very long lines. You’ll want to visit it first thing in the morning, or using a FastPass. Mission:Space is the next most popular. It features a milder ride option (green) as well as one that simulates real G-forces (orange). The orange option sees longer lines. You’d be wise to visit early in the day, or use your Tier 2 FastPass choice. Other attractions in Future World East include Spaceship Earth, Ellen’s Energy Adventure (note that it takes 45 minutes to experience this attraction), and Innoventions. Innoventions East & West each have various interactive exhibits to explore. The only one that has any major draw (and therefore, lines), is the Sum of all Thrills, a design-a-coaster simulator. If you’re interested, you’ll want to make this one of your first 3 or 4 stops for the day.

In Future World West, you’ll find The Seas with Nemo and Friends. The Seas pavilion features a lot of family fun. First, ride the Nemo attraction. Then, enjoy Turtle Talk with Crush- he actually interacts with the audience! Finally, don’t leave without exploring the aquarium (see #4)! All of these attractions are popular, but don’t often have massive lines.

In the Land, you’ll find Living with the Land, a boat ride which gives you a peak at the innovative greenhouses at Epcot. The pavilion also features an environmental film (though rather outdated) featuring characters from the Lion King. Finally, the biggest draw here is Soarin’, which simulates a hang-glider flight over California. Soarin’ is the park’s most popular attraction, and if you don’t get to it first thing in the morning, I hope you’ve reserved a FastPass!

The remainder of Future World is made up of Journey Into the Imagination (Figment’s ride) and Captain EO, a futuristic Michael Jackson film. Neither of these attractions is as popular as they once were, and the lines are not typically a problem.

4. Don’t miss the spectacular aquarium tanks at The Seas.

After you ride “Finding Nemo”, you’ll be let off into a large building that also houses “Turtle Talk with Crush”, as well as an enormous aquarium. Don’t miss the opportunity to walk around and look into all of the tanks. There are tiny tanks with seashores, and massive tanks with sharks, sea turtles, manatees, and other fish. Don’t neglect to go upstairs for more great views! The tanks here are massive (5.7 million gallons) and not to be missed.

3. Enjoy the World Showcase later in the day.

The World Showcase opens about 2 hours after Future World opens. If you can visit Epcot twice during your trip, you may want to visit the World Showcase right when it opens (at 11am, typically). It’s really nice to explore this area when it is less crowded. However, this is not a generally sound touring strategy. Your morning hours should be spent riding the popular attractions first. That’s why we recommend enjoying it later on in the day.

There is so much to see and do in the World Showcase that you should really dedicate some time to exploring it. There are fantastic sit-down restaurants (reservations recommended), as well as plenty of treats you can walk-up and enjoy. Would you like some desserts in France? Beer in Germany? In the World Showcase, if you can dream it, you can eat it or drink it.

Don’t miss the cultural films, performances, and attractions, either! Currently, there is only one ride in the World Showcase. Maelstrom is being re-imagined as a Frozen attraction. The only remaining ride is the Gran Fiesta Tour with the Three Caballeros. This is a family-friendly boat ride, housed inside the impressive Mexico pavilion.

2. Visit during a special event.

Epcot is home to many special events, from the Food and Wine Festival, to the Flower and Garden Festival, and many in between. These special events come with interesting food vendors, entertainment, and activities for the kiddos. They don’t cost anything extra, and really enhance an already wonderful Epcot experience. And, because Epcot is such a large park, it can handle the increased crowds that these events bring.

1. Relish the park after dark.

The World Showcase is truly breathtaking at night. You simply must plan an evening at Epcot. Make sure you don’t leave before IllumiNations, Epcot’s nighttime spectacular.

I hope you enjoy your next visit to Epcot with our tips in mind. With a few FastPass reservations, a loose plan of what to do during the day, and comfortable shoes, you’re sure to have a great time at Epcot and be able to get the most out of your day!