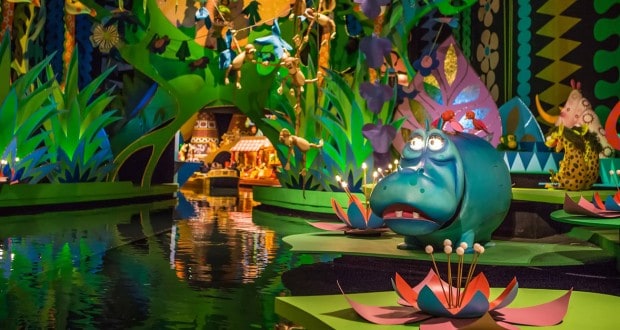 it’s a small world (left un-capitalized intentionally) is a favorite attraction of mine, and I love learning as much as I can about how this timeless ride came to be. Some people can’t stand the ride, citing “that song!!” as the reason they simply can’t stomach it. Love it or hate it, you can’t deny that it’s a small world has a whole lot of history. Read on to learn some facts about this 50-year old favorite.

1. A message of world peace

it’s a small world promotes unity and peace across the globe. The song lyrics remind us that “a smile means friendship to everyone.” No matter how different we may seem, there is a common threat that weaves the world’s people together.

Note that I said in my intro that I have intentionally left “it’s a small world” un-capitalized. For some reason, Disney does not capitalize the attraction title. The sign for the attraction at the 1964 World’s Fair also shows no capital letters. I’m guessing the use of exclusively small letters has something to do with emphasizing that it’s a “small” world, but perhaps we’ll never know!

Richard and Robert Sherman wrote the now famous “It’s a Small World” song for the attraction over 50 years ago. Their original idea was to have the dolls sing the national anthems of their respective countries, but they couldn’t get it to flow properly from room to room. That’s how the song we know and love today came to be; the brothers kept it simple so that it could be sung in various languages but sound similar in each area of the attraction. Now, their famous song plays roughly 1,200 times per day in just one park (assuming the park is open for 16 hours). It’s easy to see how it can get stuck in our heads, right?

Did you know that the Sherman brothers have written more musical scores for motion pictures than any other song-writing duo? Just a few examples… Mary Poppins, The Aristocats, The Parent Trap, Winnie the Pooh, and some other park attraction favorites, too (“There’s a Great Big Beautiful Tomorrow” from the Carousel of Progress).

4. Leave it to the Ladies

Walt Disney may have conceived the idea for it’s a small world, but there were some very important women involved in bringing it to life.

Mary Blair was an Imagineering art director, and the woman responsible for the overall design concept of it’s a small world. Blair also created artwork for Cinderella, Peter Pan, and Alice in Wonderland. Her shapes, colors, and overall aesthetic help make the attraction distinctive and recognizable.
Disney icon Alice Davis, who was in charge of the dolls’ costumes, was given no budget for her costuming work. Walt Disney told her to design and create whatever she needed; he wanted each doll to wear whatever a woman in that country would dream of wearing.

In 2014, it’s a small world celebrated the 50th anniversary of its debut at the New York World’s Fair in 1964. It’s a small world was created exclusively for the World’s Fair; it was not expected to be so popular and have the staying power that it did. It was moved to Disneyland in 1966 and has been extremely popular ever since. When the ride opened at Disneyland in 1966, children from around the world were invited to bring containers of water from their native rivers and seas to be added to the ride’s flume.

Each of the 5 Disney parks locations worldwide has the “it’s a small world” attraction. 4 of them feature a 30-foot tall clock tower outside the ride and an impressive, colorful backdrop. Sadly, Disney World has a small and less impressive façade. The gold and white clock tower and other elements at Disney World are inside the ride queue area, perhaps to help allow the attraction to “blend in” to Fantasyland more appropriately. On a fun note, the Disney World attraction has a fun feature that the others do not: If you have a bite to eat in the Pinocchio Village Haus, which overlooks the ride queue, you can watch passengers embark on their journeys.

It’s a small world gets special holiday treatment at three Disney parks (Disneyland, Tokyo Disneyland, and Disneyland Paris). During this time, the original theme is joined in a medley with holiday classics. New decorations and costumes are also added to enhance the festive, holiday feel of the attractions.

8. Fun Facts about the Dolls

The doll in the hot air balloon in Disneyland’s attraction is made to look like Mary Blair, the original designer behind the dolls, shapes, and colors found in the attraction.

There are at least 240 animatronic dolls in all 5 versions of the attraction (some have more).
In 2009, many new dolls were added to the original Disneyland attraction. Disney characters were added to the ride, and mixed in among the classic dolls in the characters’ home countries. Among characters added to the ride were Peter Pan, Tinkerbell, Alice, the White Rabbit, the King and Queen of Hearts, Cinderella (along with her mice friends Jaq and Gus), Aladdin, Jasmine, Lilo, Stitch, Pinocchio, Jiminy Cricket, Mulan, Mushu, Simba, Timon, Pumbaa, the Three Caballeros, Ariel, Flounder, Nemo, Dory, Mowgli, Woody, Jessie, and Bullseye.

Another doll change-up: During a 2004-2005 refurbishment at Disney World, the clown flying in the hot air balloon near the end of the ride was given a makeover. His frown was literally turned upside-down. He used to frown and hold a sign that read, “Help”. Now, he smiles and carries a balloon. That seems a bit more fitting, no?

Whether you love or hate riding through the it’s a small world attraction, I hope you’ve learned something new about it! Even if you aren’t a lover of the ride, don’t feel bad. The clown crying “help!” just proves that for every 240 people who love the ride, there’s at least one guy who just can’t wait to get out of there!