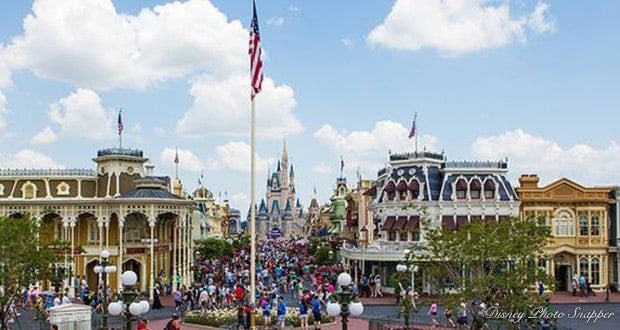 Once you arrive at the Magic Kingdom and pass through the tunnel, you emerge onto a turn of the century Main Street, USA, circa 1920. As you look around the Town Square, you can’t help but notice all the red, white, and blue decorations, flags, and banners on every building and pole. This is because Walt Disney was extremely patriotic, loved his country and wanted to show it by presenting Main Street as the all-American street where every day is the 4th of July.

After taking a few moments to enjoy the warmth and charm of a typical turn of the century Town Square, look to the left side of the street and you will see a large store called The Emporium. This is the largest gift shop in the Magic Kingdom(17,000 square feet) where you can find an unbelievable assortment of Disney-themed merchandise. Just about every souvenir you see in the Park is available here. An added plus if you are staying at a Disney Resort is the fact that you can have your purchases sent to your resort, at no extra cost. This is especially helpful for those extra large or breakable items.

Don’t forget to take a look at the outside windows, where you will be amazed at the fun and delightfully animated display in each window’s depiction of a classical Disney movie. Children, especially, are captivated by these fanciful scenes, and you will also notice that the windows are built low to the ground so even the smallest visitor has a good view.

Located on the left as you enter the Magic Kingdom, nestled between the “car barn” and the Emporium is the Harmony Barber Shop. With all of its charming, old fashioned barbershop look, guests usually take a second look before realizing this is an actual working barber shop. Here you can get a quick trim or a full groom, along with a comical act by the barbers, who will do whatever it takes to get a laugh. From donning a Mickey Cape to bringing out a giant pair of red scissors, their goal is to give you or your child a professional haircut that will be memorable and magical, with a final sprinkling of Pixie Dust.

As you are making your way down Main Street, there is a small hat shop tucked away in the far right corner of Town Square, called the Chapeau Shop. This little shop is stocked from the floor to the ceiling with every kind of Disney hat you can imagine. There are whimsical character hats, baseball caps, Mickey or Minnie Mouse ears, and so many more. Some can even be embroidered with your name.

One really unique and mostly unnoticed item located near the back of the store, hanging on a wall is an old fashioned, hand-crank telephone. What is really special about this telephone is that when you listen in, you will hear a party line conversation between two women that is sure to make you laugh. Cast Members who work there enjoy watching curious guests’ reactions when they pick up the earpiece and are surprised to hear voices coming through the receiver.

5. The Windows on Main Street

Walt Disney wanted to find a way to express his deep respect and admiration for all those men and women who were instrumental in the developing and building of Disneyland. This recognition came in the form of tributes painted on all the windows of Main Street. Each window had its own make-believe title and Shopkeeper’s name, which were actually the real names of the “imagineers” whose efforts and hard work contributed to making Walt’s dream a reality. This tradition was continued at Walt Disney World. You can find one of the windows dedicated to Walt Disney at the end of Main Street on the right side, over the Plaza Restaurant, facing Cinderella’s Castle.

6. The Sounds of Main Street

In addition to the many sounds of Main Street, like the train whistle, piped in music, the Barber Shoppe Quartet entertaining with their musical harmony, etc., there are a few sounds many guests are not aware of: When you enter the Main Street train station, take a moment to listen for the sound of a telegraph tapping. The message being sent is Walt Disney’s opening speech at the opening of Disneyland on July 17, 1955. As you are walking down Main Street, just as you pass the Uptown Jewelry Store on the right side, tucked away in a small alcove are a couple of small tables and chairs and two park benches. Just take a seat for a few moments, listen, and you will hear the sounds of tap dancing along with the voice of an instructor, and the sound of someone singing musical notes. These sounds are coming from a partially opened second story window, titled “Singing Lessons” and “School of Dance”.

7. Look Up, Look Down, Look All Around

There are often so many overlooked small details that the Disney imagineers have created to amuse and entertain their guests. One of these special creations is on Main Street. On the right side of the street, as you are approaching Tony’s Town Square Restaurant, a “Lady and the Tramp” themed eatery, look down and you will see the imprint of a paw in the sidewalk. It is these little details that make the Disney Parks so extraordinary. So keep your eyes and ears open for more Disney surprises!

At the end of Main Street, there is a popular counter-service restaurant called Casey’s Corner. This baseball-themed eatery has been at this same spot since Walt Disney World opened in 1971, and its popularity has grown so much that they had to renovate and put in extra seating inside. There is also plenty of seating room outside with umbrella covered tables and chairs. The menu is made up of Chicago style all beef hot dogs (several signature choices), fries, corn dog nuggets, nachos, and a really nice toppings bar, along with assorted beverages. In addition to the best hot dogs in the Magic Kingdom, there is a honky-tonk piano player, Jim Omohundro, who has been with Walt Disney World at Casey’s Corner for the past 30 years. He plays just outside the restaurant, usually music from the late 1800’s and early 1900’s. He also takes requests. What a way to enjoy a meal; scrumptious hot dogs, fries, and a cold beverage, while you listen to some of the best ragtime piano playing you’ve ever heard. If you feel like it, kick up your heels and celebrate being at the most magical place on earth, Walt Disney World.