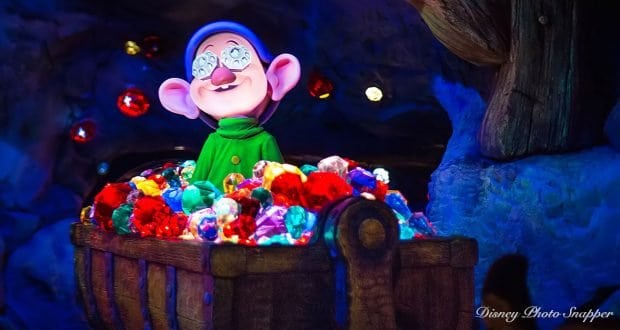 Walt Disney World in Florida is preparing for its 50th Golden Anniversary, with new attractions, rides, restaurants, stage shows, fireworks extravaganzas, parades, and many more exciting surprises awaiting Disney World fans.  Walt Disney World, which opened to the public on October 1, 1971, is already the most visited vacation resort in the world, with an average annual attendance of more than 52 million.  It comprises 4 theme parks (Magic Kingdom, Epcot, Hollywood Studios, and Animal Kingdom), 2 water parks, 27 themed resort hotels, 9 non-Disney hotels, several golf courses, a camping resort, and other entertainment venues including an outdoor shopping, dining, and entertainment complex, Disney Springs.  Of the 4 theme parks, Magic Kingdom is the most visited and most popular.  Here are some reasons why this is so.

When you pass through the tunnels leading to Main Street, USA, you are immediately immersed in the nostalgia and atmosphere of a turn-of-the-century small town America.  The outside world melts away as you are now standing in Town Square complete with vintage replicas of 1800’s architecture, including a City Hall building, Fire Station, Town Square Theater, and above the tunnels the beautifully designed turn-of-the-century Main Street Train Station, where you can board an old-fashioned steam locomotive for a round trip circle around the Magic Kingdom.

As you walk down Main Street, you will pass several Disney-themed shops and restaurants.  The Main Street Emporium is the largest gift and souvenir shop in the Magic Kingdom, where you can shop for everything Disney including apparel, toys, hundreds of plush Disney characters, Mickey ears, ball caps, unique character headbands, jewelry, and Disney collectibles galore.  There are also other specialty shops and several fine dining or quick dining venues. If you want to skip walking down Main Street for now, climb into a horse drawn trolley, antique fire engine, omnibus, or a horseless carriage for a ride to the end of Main Street, where you will find yourself at the entrance to Cinderella’s Castle, a gorgeous replica of the “Neuschwanstein Castle” in Bavaria.  It is the most popular photo spot for that extra special pose with families and groups.

Tomorrowland was originally designed to portray Walt Disney’s view of the future.  On opening day, however, only two attractions were opened: “Grand Prix Raceway” and “Skyway to Fantasyland”.  Three other attractions were added shortly after the opening date: “Flight to the Moon” a simulated flight to the moon, (soon replaced by the updated “Mission to Mars”), “America the Beautiful”, a 360 degree circle vision movie, and “20,000 Leagues Under the Sea” submarine ride.

Now, just in time for the Golden 50th Anniversary, Tomorrowland will be getting another face lift with a brand new attraction, “TRON Lightcycle Power Run Motorcycle”, an indoor coaster-style ride that allows riders to board a train of two-wheeled Lightcycles for a thrilling race through the digital frontier.  The attraction will be located next door to “Space Mountain”,an indoor dark thrilling roller coaster ride. This will most likely become the most visited area of Tomorrowland.

From April, 2010 until May, 2014 Fantasyland underwent the largest expansion of Walt Disney World in its 41-year history, doubling in size from 10-21 acres.  A few rides and attractions were permanently closed and new rides and attractions were added.  A whole new area, “Storybook Circus” debuted on March 12, 2012 with twin “Dumbo the Flying Elephant” side by side carousels with colorful new water and lighting features, connected by an indoor queque that doubles as a playground.  Another attraction is a family-friendly roller coaster, “The Great Goofini’s Barnstormer”, plus a large Circus Tent housing Dumbo’s Circus souvenirs, sweet treats, apparel, hats, Mickey ears, etc.  Stop by for a special “Meet and Greet” with Mickey, Minnie, Donald Duck, Daisy, and other Disney characters.  There is also a splash and play area where young and old can cool off on those hot summer days.

The “New Fantasyland” had its grand opening on December 6, 2012, with new rides and attractions.  On May 28, 2014 the newest attraction, “Seven Dwarfs Mine Train”, a thrilling family-friendly roller coaster opened and became the last attraction completed in the Fantasyland expansion.  Other new attractions were “Under the Sea-Journey of the Little Mermaid”,“Enchanted Tales With Belle”, “The Many Adventures of Winnie the Pooh”, and, of course, “Dumbo’s Storybook Circus”. The newest restaurant included in this expansion was “Be Our Guest” restaurant, set in the beautifully recreated “Beast’s Castle”, where you can enjoy a quick service breakfast, lunch, or sit-down dinner.

Liberty Square located near the Rivers of America is a nostalgic recreation of a colonial village in the Revolutionary era of America.  The buildings and cobblestone streets are reminiscent of a time in American history when the thirteen original colonies were beginning to expand.  The architecture captures the spirit and look of that historical period. There are three major attractions to visit here.  The first and very popular is the “Haunted Mansion” where guests take a ride in a “doom buggy” for a ride into the inner sanctum of an old abandoned 18th century mansion.  During their tour, they will encounter 999 ghosts and spirits accompanied by eerie sights and sounds of ghoulish screams, moving furniture, and a trip through a very scary graveyard.  After your visit with the ghosts and spirits, take a ride on the “Liberty Belle” , a paddlewheel steam-powered riverboat which takes guests on a cruise around the Rivers of America.  Another attraction is the “Hall of Presidents” set in a beautifully designed colonial-style mansion, which houses a grand theater where 45 audio-animatronic figures representing all the US Presidents come to life.

From Liberty Square you can enter the world of the Wild West where banjo music and smoked turkey legs abound.  Everywhere you look the old west is represented in the shops, eateries, and wooden walkways.  The rides and attractions are reminders of a time gone by when cowboys, wagons, log flumes, and gold mines were “signs of the times”.  There are two major attractions in Frontierland, “Splash Mountain”, a log flume ride which takes you inside a mountain and into the comical, musical world of Disney’s classic film, “Song of the South”.  It’s a fun-filled, splashy ride where you will meet all kinds of critters, including Br’er Fox, Br’er Bear, and Br’er Rabbit as they carry out their antics for all to see.  Watch out for that big splash at the end of the ride.

The other attraction, “Big Thunder Mountain Railroad”, is a speeding roller coaster ride on a runaway mine train, with sharp turns and sudden dips as your train darts in an out of an old abandoned mine, which is exploding just as you exit the mine.  Hang on tight because you are on the “wildest ride in the wilderness”!

Tom Sawyer’s Island is an outdoor adventure for the whole family.  Get on board a motorized wooden raft for a trip to an island where Mark Twain’s novels about Tom Sawyer and Huckleberry Finn come to life.  Set in the 1840’s, the stories are about these two boys and their shenanigans  and how they spent their days romping, running, climbing, and exploring caves, totally enjoying their carefree lives.  You can experience those same adventures on this island recreated by Disney imagineers to remind guests of those carefree days.  There are caves to explore, barrel bridges to navigate, an old Western fort to visit, and plenty of other experiences for the youth in all of us.  Enjoy the island with your family and be sure to check out the view of the Haunted Mansion from a deck near the water’s edge complete with two old-fashioned rocking chairs.

Just around the corner from Frontierland is the amazing and wondrous world of Swashbuckling Pirates, African jungles, Arabian Kingdoms, delightfully entertaining tropical birds, and a one-of-a-kind family treehouse.  On the attraction, “Pirates of the Caribbean”, guests travel on a small boat into the world of pirates pillaging a small village, where you can catch a glimpse of the infamous pirate, Captain Jack Sparrow.  On the “Jungle Cruise” guests board an old-fashioned tramp steamer and travel down the Nile, Amazon, and Mekong Rivers for an exciting tour of lavish jungles, waterfalls, curious gorillas, bathing elephants, and a group of hungry hippos. “Magic Carpets of Aladdin” gives guests a chance to fly on a magic carpet for a circular view of an Arabian marketplace.  The “Tiki, Tiki, Tiki Room” is an indoor theater where audio-animatronic tropical birds create beautiful music and Tiki statues create the sounds of thundering drumbeats.  Before you leave Adventureland be sure to explore the “Swiss Family Robinson Treehouse”, an exact replica from the Disney feature film, “Swiss Family Robinson”.  Also, be sure to try the famous island favorite, a refreshing Dole Whip frozen treat.  It will bring pure joy to your taste buds.

Well, there you have it, a synopsis and overview of the “Magic Kingdom” at Walt Disney World.  In addition to all the rides and attractions, there are so many themed restaurants, counter service venues, and snack carts to choose from, a multitude of shops, fabulous stage shows, parades, and fireworks displays to enjoy.  Without a doubt, the Magic Kingdom remains the most popular theme park in all of Walt Disney World.  Discover for yourselves why it holds that great honor.