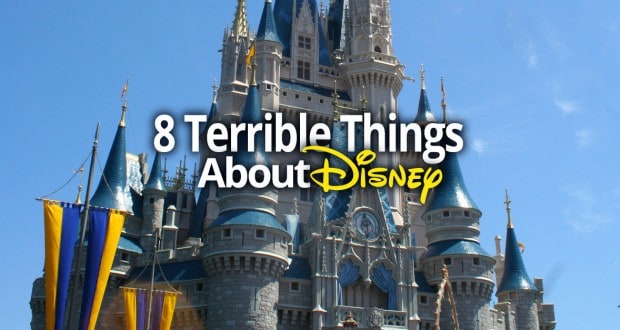 I love Disney World more than any other place I’ve visited, but I was still able to come up with 8 completely terrible things worth hating about it. #1-4 could have been written by the ever-cranky Donald Duck. They’re pure sarcasm and I don’t mean a word of these! #5-8, however… they’re actually things that Disney Fanatics might all agree are truly terrible things!

1. The cast members are way too nice.

Seriously, what is with these cast members? They’re always smiling, answering your questions, and directing you where to go! They need to learn to be disgruntled like all the others on the “outside” who serve food, corrals crowds, and provides customer service. Ultimately, they need to face reality- they’re “employees” just like everyone else in the real world. Do your job, get your paycheck, and go home. Stop smiling and waving with those ridiculous Mickey hands!

Disney has a lot of nerve not putting televisions in the line queues, restaurants, and other areas. Think of an airport- I love being able to watch TV when I’m waiting for my flight. I like hearing all the bad news of the world before boarding an airplane. I think that Disney needs to do a better job of keeping us informed of all of the terrible events going on outside the park. Personally, I would feel a lot more satisfied if I could be updated about the most recent international epidemic or crime spree while waiting to ride “it’s a small world.”

3. Paying for things is too convenient.

I hate that I can use my Magic Band to pay for things. It’s really much more convenient to carry my entire wallet into the park and pay with a credit card or cash. Personally, I like to bulk myself down with as many extraneous things as possible, so this whole Magic Band thing is just not my preference.

4. There are too many things to do in close proximity.

You know, having so many choices of cuisine and activities available in such a small area is really a pain. At home, it’s so easy to decide what to do on a free day. “Do you want to go to a movie, or out to eat? “That’s it. Sure, there are some seasonal things here and there like the beach or apple picking, but that’s about it. “What should we order for dinner- pizza or Chinese food?” All of these choices at Disney are preposterous. “ Do you want to go drive a race car?” “Should we go to Morocco for dinner?” “Would you like to watch fireworks tonight?” “ Do you want to stay out late tonight and go on rides until midnight, or get up early and go on an African safari?” Ugh.

5. It’s highly unlikely that you’ll ever get to live at Disney. And that, my friend, is unacceptable.

Unless you have $1.8 million (minimum) to shell out on a residence in the Golden Oak resort, you’re never going to live at Disney World. To the avid Disney lover, anything other than eventually living there is basically just not okay. Wouldn’t you agree?

6. Disney gave me some really warped ideas about what life would be like.

A little sarcasm here – I know that I can’t believe that fantasy mimics reality. Let’s face it, if we believe in Disney magic too much, then we may be left feeling lied to! It’s one of the very real dangers of a Disney addiction- starting to believe that Disney World is the actual world you live in. Here’s an example. Based on my steadfast Disney beliefs, I thought that all I had to do as a female was to find my one true love (check) and then I’d live happily ever after! Then, my days would be filled with easy activities like riding my horse into the sunset or doing lovely, happy things every day. Disney did not prepare me for stress, migraines, working, mortgages, dealing with ridiculous people, and all the other joys of life.

7. The real world is horrible disappointing and inconvenient in comparison to Disney.

Disney does too good of a job at making the real world look, well… terrible. It doesn’t stop at the parks, either. The movies, they’re just as bad! Need to hem your pants? Can’t some of Cinderella’s enchanted creatures hem and sew for me? No. Feeling lonely? Surely your prince is on his way! Or, not. At the store and looking for a “cast member” to help assist you in every way imaginable? Yeah right. Having a hard time convincing your dad to let you marry the man of your dreams? Surely he’ll come around, right? Wrong. Long line at the post office? Just grab a FastPass… NOT.

8. Eventually, you have to leave.

This is the absolute worst thing about Disney World. It’s like finding your soul mate, only to find out a week later that your soul mate is actually an imaginary friend (of someone else, no less). Usually at the end of a vacation, I’m ready to go home and get back to my routine- but not when I’m at Disney! I’m never ready to get back to reality. Leaving the parks on the last day is truly heartbreaking.

Hopefully you’ve recovered from the shock of seeing the words “terrible” and “Disney” in the same sentence. What did we miss? Would you add anything to this list?