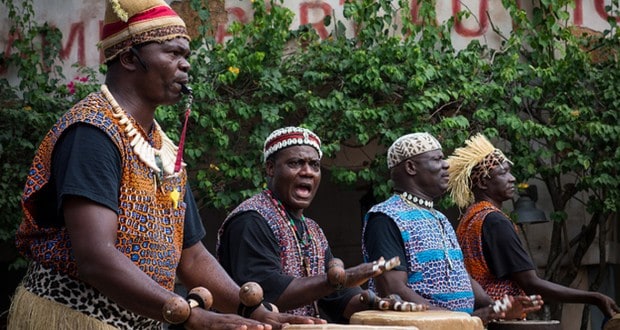 One of Animal Kingdom’s best assets is its entertainment lineup. Even without an afternoon parade, the park has several high quality performances that could easily fill your day. Some people aren’t “show” people, but I encourage you to change that on your next visit to Animal Kingdom. Touring Animal Kingdom is usually a “hot” experience, especially in the summer. There’s a lot of walking to do and not as many opportunities to duck in and out of cool attractions, since so many of them are outdoors. Use that as incentive to check out the park’s two biggest shows- Finding Nemo: the Musical and Festival of the Lion King. You’ll love the air conditioning and the performances.

Adding to what Disney refers to as the “streetmosphere” are several musical acts that appear in the park throughout the day. Although not lengthy shows with formal locations or seating, they include some of the more authentic cultural acts and should not be missed. They include: Approximately once an hour a group of African drummers come out to perform in the Harambe village area. The drummers are enthusiastic performers and love when the audience dances. This is also a great area for taking a break. There’s a huge restroom facility, interesting shops, and snacks all in the immediate vicinity.

Burudika is another band that performs in the Harambe area. Burudika has both male and female vocalists and plenty of instruments. They perform a variety of music, ranging from Paul Simon’s “Call Me Al” to “Hakuna Matata.” The name Burudika means, “to be refreshed” in Swahili, so go enjoy their refreshing musical performance!

The Viva Gaia Street Band appears opposite Flame Tree Barbeque, and has a Caribbean flair. Just in case you haven’t gotten enough of a workout walking through the parks, you may be able to join a Zumba-esque dance party while listening to the band. Don’t worry if you don’t have the moves- there’s someone there to follow along with.

Appearing at Rafiki’s Planet Watch, Gi-Tar Dan makes up songs on the fly to the delight of his audiences. His songs are actually about audience members, so feel free to approach and talk to him. You might just be the subject of his next tune!

Chakranadi is a musical duo that appears in Animal Kingdom’s Asia section. During this performance, you’ll experience the mellow sounds of the sitar, a stringed instrument, and the tabla, a traditional Indian drum played with the hands.

DiVine is a foliage-clad performer at Animal Kingdom. A statuesque stilt-walker, Divine is surprisingly hard to spot. She is often found creeping along the path between Asia and Africa. If you don’t see her, try asking a cast member to tell you where she is.

Want to feel the rush of air as a parrot, eagle, or other bird soars closely over your head? If so, you’ll love the Flights of Wonder show at Animal Kingdom. The show blends elements of comedy, bird tricks, and messages about conservation. During the show, you’ll be delighted by a variety of tricks, including a parrot who can do math and one who can sing countless tunes. Other birds in the show are trained to catch objects in mid-air and snatch items from audience participants. The only people who will not be delighted by this show are those who have an intense fear of birds, as the birds do soar fairly close to audience members’ heads. If you have time, try to catch the bird presentation that occurs just outside the show, usually about 30 minutes before show time. I’ve seen parrots, owls, and a hawk presented here.

If you love musicals, you’ll love this musical adaptation of Finding Nemo. Finding Nemo is the story of a young clownfish who, ignoring his overly protective dad, finds himself involved in a series of deep sea adventures. Nemo’s quest to find his way back to his father is emotional and sends a positive message of perseverance and family relationships.

With a score composed by Tony Award winner Robert Lopez, you’re truly seeing a Broadway caliber performance in the Animal Kingdom. The music, however, is only half of the experience. You’ll love watching the camouflaged (but still visible) puppeteers. They not only voice their characters, but also guide their puppets gracefully through the “sea.”

1. Festival of the Lion King

Festival of the Lion King is now being performed in its brand new facility in the park. Festival of the Lion King is a great show, and probably my favorite of any live entertainment in all four parks. The quality of the performances is superb. Enjoy the tumbling monkeys, the acrobatic birds, and the vocal styling of Scar as you sing along to all of your favorite songs from The Lion King. This is a show that is sure to delight all members of your party, from young children to adults. Some children will be chosen to participate, as well, so “be prepared” for that!

Festival of the Lion King showcases the talents of a variety of performers. One of the highlights are the acrobatic monkeys, who are both agile and hilarious. You’ll love the way they flip on the trapeze, hang off each other, and leap high into the air on their trampolines. The pair of birds who perform “Can You Feel the Love Tonight” give a moving and beautiful aerial performance as well. The fire juggler is sure to exhilarate you, and you’ll also love the vocal performances a few very talented singers.

Animal Kingdom already has lots of great things to do (if you don’t believe me that it’s a full-day park, check out 15 Things You Won’t Want To Miss at Animal Kingdom). In a few years, there will be even more entertainment options available as the park expands, including a nighttime show! In the meantime, which of these performances do you make sure you see every time you visit Animal Kingdom?