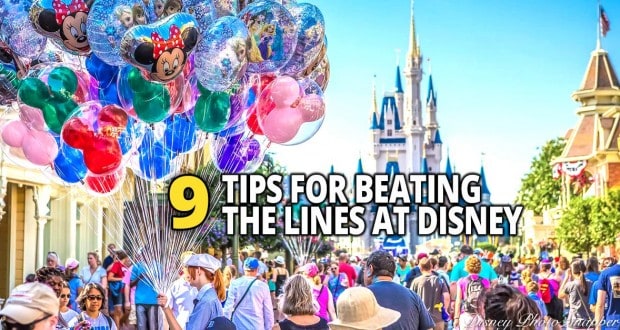 9 Tips For Beating The Lines At Disney

9 Tips for Beating the Lines at Disney World

If you’re anything like me, you probably hate waiting in lines. It’s not that I don’t have patience. The real reason I hate lines at Disney is because I know that waiting in long lines simply isn’t necessary. I say this as a person who has only travelled to Disney during peak times- late June, early July, and Easter week. I am also a person who enjoys most of the headlining attractions. If you follow some of these tips, you too will realize that waiting in excessively long lines does not have to be part of your Disney vacation experience.

This is perhaps the most important tip of them all, and some of the others depend on following this one. The largest crowds don’t arrive at the parks until mid-morning, or an hour or two after park opening. Here’s why. Lots of people sleep in. Or, their little ones are tired because they were up late the night before watching fireworks. Or, a character breakfast was on the agenda. Or, they arrived at park opening time, but they had to walk from the buses, and then wait in bag check lines. No matter what the reason, most people just don’t catch the first few buses to the park or arrive before park opening. This means that if you do, you’ll be there before thousands of other people. I’m not suggesting that park arrival is a competition, but if you are among the first to arrive in the morning, then you will have a solid hour to ride several attractions in a very short amount of time.

Let’s talk about how this works. Let’s say you are at the Magic Kingdom. You’ve arrived 30 minutes before park opening, breezed through bag check, and get to watch the magical Welcome Show. The park opens with much pomp and circumstance, and you beeline to New Fantasyland. You’re done with the Seven Dwarves Mine Train, Peter Pan’s Flight, and Under the Sea (if not one or two more) within your first hour in the parks. Now, the throngs of people are starting to pour in, and you remain 3 steps ahead of them all day. They swarm in, and head to the most popular rides (which you’re already done with). By late morning/early afternoon, you’re on to less in-demand attractions. You’re enjoying an uncrowded Adventureland (one of the last areas people typically visit during the day) because the rest of the people haven’t gotten there yet. Can you tell that I feel strongly about arriving at rope drop??

7. Visit popular attractions first thing in the morning, in the evening, or during parades/shows

Hopefully you’ve followed tip #1. Even if you haven’t, it’s important to visit the most popular attractions early in the day, before they get really long lines. Attractions with long lines tend to see slightly less of a wait during popular shows (ones that the whole park stops to watch, like Wishes or Fantasmic). Late in the day is another great time to ride. Animal Kingdom is a remarkable example of this. The park closes fairly early (as early as 5-7pm depending on the time of year) and it also tends to see a dramatic drop in crowds late in the afternoon. You might be able to walk on to the popular attractions if you want until very late afternoon/evening to ride. At the parks that stay open later, like the Magic Kingdom, you’ll have an easier time riding certain attractions at night, when many families are too pooped to stay any longer. Don’t rush out after Wishes or the Main Street Electrical Parade; wouldn’t you rather go on more rides instead of waiting in line for a bus with everyone else?

You need to know what rides you want to go on and what park they are located in. At the very least, you should have an order in mind for the first 3-4 things you want to do in the morning when you arrive, based on some knowledge of what rides are most popular. If you do find yourself wondering, “Where is that Mount Everest ride again..?” Just ask someone. Don’t spend a lot of time looking things up or wandering around in the morning. If there isn’t a Cast Member in your immediate line of sight, just ask anyone around you, especially if they look like they know what they’re doing. Personally, I love to answer people’s questions should anyone stop to ask me, and I think that most experienced Disney guests feel the same.

Like it or not, FastPass+ will work in your favor if you use it. Reserve your FastPass+ selections in advance. For the most popular experiences (meeting Anna and Elsa, or riding the Seven Dwarves Mine Train) you must reserve them as early as possible. The in-park kiosks will have limited rides and times available. Do not wait and rely on them.

4. Be willing to do some walking

While crisscrossing the park may feel counterproductive, if your party is able-bodied (or your little ones are traveling in strollers), doing a little bit of extra walking is to your advantage. Most people tend to tour the parks in circular fashion, usually counterclockwise. If you can, it makes sense to walk to the most popular attractions first, bypassing those that don’t have long lines until later in the day. For example, you may visit Tomorrowland to ride Space Mountain in the morning, but don’t spend time riding Astro Orbiter and the People Mover during these precious morning hours. Walk across the park to ride other “mountains” or visit Fantasyland before stopping at less popular attractions.

This one may or may not be possible for you, but it’s worth a mention because it makes a sizeable difference in the crowd levels you will experience. Visiting during less busy times of year is beneficial because the rides have shorter lines. Still, the same strategies discussed here are useful; they are just less essential when the park crowd levels are lower.

As a huge fan of character meals (and meet and greets in general) I am not suggesting that they aren’t worth doing. They absolutely are. However, don’t spend more than one morning on large sit-down breakfasts. There are plenty of fantastic character meals available for lunch and dinner, when you’ll want a break from the day’s activities anyway. Use your morning hours to enjoy the park before the crazy crowds, or in the warmest months, the heat. One special exception here is having a breakfast reservation at Cinderella’s Royal Table. If you have one in the early morning, you’ll actually be inside the park before it opens. You can’t do anything other than wander Main Street and have your breakfast, but it sure is nice to have that uncrowded time in the Magic Kingdom. If you make your reservation early enough, you may even get to start riding your favorite attractions along with the rest of the people who arrived right at park opening.

1. Use single-rider lines, if available

Some rides in the parks offer “single-rider” lines. Basically, it’s a seat filler line. If you are willing to ride separately from your party, you can all just get in line (together) and then you’ll be taking one at a time whenever there is a row in need of a single rider. These lines typically move more quickly than the standby lines. Single-rider lines are available on Expedition Everest, Rock ‘n’ Roller Coaster, and Test Track.

We hope our tips help you maximize your fun while minimizing your wait times! Do use any of these tips already? Which ones have saved you the most time in lines?

Looking for more helpful tips and tricks on your next Disney vacation? You can work with an Authorized Disney Vacation Planner. They’ll help you get the best price for your vacation, share their expert advice and their services are totally FREE!