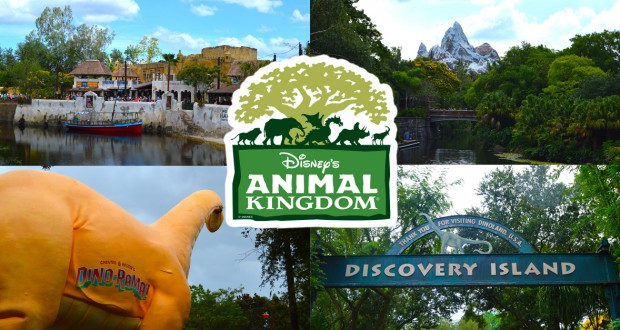 How To Tackle Animal Kingdom 101: Part 1: Rides and Attractions

For guests who are less familiar with Animal Kingdom, here is a crash course in everything you need to know about what the park has to offer. First, we’ll take a look at the “meat” of the park- the rides and attractions, as well as a general touring strategy for the park. In part 2 of our article, we’ll conquer all the “extras”- the entertainment, and character greeting opportunities, and the food!

Animal Kingdom is a park with only a few “headliner” attractions. FastPass+ is available for DINOSAUR, Expedition Everest, Kali River Rapids, Kilimanjaro Safaris, Primeval Whirl, Festival of the Lion King, Finding Nemo- The Musical, It’s Tough to Be a Bug, and character greeting at the Adventurers Outpost. You are able to select 3 FastPass+ experiences. Let’s assume that you are interested in experiencing all of the major attractions in the park. If that’s the case, I would recommend going to Expedition Everest first thing in the morning, rather than using a FastPass+ on it. Use 3 FastPasses on Kali River Rapids, Kilimanjaro Safaris, and DINOSAUR during your day. Seeing the shows shouldn’t be a problem if you arrive 20 minutes or so prior to the show time. As for meeting characters, you won’t need the FastPass if you arrive close to when the character greeting time starts (check the Times Guide- but they generally begin around 9-11am). Most people will still be hitting the headliners during the morning, so if you are among the first group to make your way to seeing the characters, you’ll be in good shape. You will be able to experience the other major attractions later on using your FastPasses.

The Oasis is the front area of the park, beginning immediately after you pass through the ticketing area. Here you might notice the Oasis Exhibits, which are animal exhibits and encounters hidden among the tropical pathways. If you take your time, you may encounter Cast Members holding a variety of animals for you to meet up-close. Cross the bridge ahead, and you’ll find yourself on Discovery Island.

These walking paths allow you to get extremely close to the base of the Tree of Life- in some cases, passing under the roots. As you meander through these trails, you’ll also see lemurs, flamingos, and other interesting creatures. I can’t emphasize enough how amazing it is to see the detailed carvings on the Tree of Life. You can also get close to the tree and as you approach and exit “It’s Tough to be a Bug.”

Flik from the film, A Bug’s Life, will take you into the world of insects in this 3-D, multisensory experience. While it’s great fun, be aware that it is dark and a bit startling at times. There are some effects that might frighten children, or even adults. Without giving too much away, remember that I said “multisensory.” This includes touch. You’ve been warned! That being said, it’s a very well-done attraction!

Continue your journey beyond Discovery Island by passing to the left of the Tree of Life, and you’ll find yourself crossing into Africa.

This is what Animal Kingdom is all about- getting up close and personal with the animals. The Kilimanjaro Safaris is a fantastic ride through the 110-acre area where the animals roam during the day. On the safari you’ll see have the opportunity to see 34 species of animals, including lions, rhinos, antelope, cheetah, elephants, flamingo, gazelles, giraffes, and many more. While your animal viewing may vary every time, I’ve never been disappointed or felt that I didn’t see enough animals. Often, I am shocked at how close they are to the ride vehicles. This attraction is definitely one to either ride first thing in the morning, or use a FastPass+ reservation for. It will have long lines fairly quickly. You might even want to ride more than once, because the animals are active at different times during the day.

The entrance to this trail is located very close to the exit for the Kilimanjaro Safaris, and for that reason, many people miss this trail because they are rushing off of the Safari and heading to the next big attraction. The Pangani Forest Exploration Trail is home to the park’s native African animals, including gorillas and hippos. Don’t miss a chance to watch the hippos underwater! Before leaving Africa, take the Wildlife Express Train to Rafiki’s Planet Watch.

Take the Wildlife Express Train out to Rafiki’s Planet Watch, where you can visit the Affection Section (an animal petting area), as well as the Conservation Station, where you can watch cast members at work. If you’re lucky, you might observe a vet procedure or check-up, or be able to look through the glass and see scientists working on their research projects. Upon returning via the train, follow the path out of Africa to your left and you’ll find yourself entering Asia.

Is a trip to Southeast Asia to tour the exotic jungles just a little outside your reach? The Maharajah Jungle Trek is worthy substitute! On this walking trail, you’ll see Animal Kingdom’s beautiful tigers, as well as other animals native to Southeast Asia. Also not to be missed are the gigantic fruit bats.

Don’t say I didn’t warn you- this one is a soaker. Part of the fun in riding down the rapids in the large round vessel is that you don’t know if your side will get drenched three times, not at all, or equally to everyone else on board! It’s fun for the whole family- everyone who’s taller than 38”, that is.

Expedition Everest is a one-of-a-kind coaster, complete with a Yeti blocking your path! Adrenaline junkies should not be deterred by the fact that this coaster does not go upside down. What it does do is travel extremely fast through a treacherous mountain, both forward and backward. If you head to Expedition Everest first thing in the morning, you’ll have an easy time avoiding a wait. Other tips for a short wait: Use FastPass+, or take advantage of the ride’s “single rider” line if your party doesn’t mind being split up. If you do find yourself waiting in the queue, they’ve really made it interesting by including lots of authentic Nepalese artifacts for you to look at. It’s one of the most interesting queues in Disney and actually worth being in line for a bit to check out.

Pass Expedition Everest and continue over the bridge to reach Dinoland U.S.A.

Upon entering Dinoland U.S.A. you’ll see an area that may seem a bit out of place- a carnival! Chester and Hester’s Dinorama features several attractions: Primeval Whirl, TriceraTop Spin, and carnival games.

Primeval Whirl is a dinosaur-themed carnival style ride. Technically a coaster, you sit in a round car that turns back and forth as you zoom down the tracks. This is one ride that doesn’t look like a big deal, but once you are on it you will either be laughing hysterically or wishing you didn’t ride it because you do get flung around a lot.

Here’s one way to avoid potentially long wait times at Dumbo: ride TriceraTop Spin instead. This ride is basically Dumbo with Triceratops instead of elephants.

Also located in Dinoland, U.S.A., you’ll find a small variety of carnival games in the “Chester and Hester’s Dinorama” area (near Primeval Whirl). These are the kinds of games you see at other theme parks and boardwalks, and yes, they do charge extra to play.

If you read our article, 10 Things Your Kids Desperately Want to do on Vacation, you’ll recall that kids are always asking to play in play areas! Here’s a great dinosaur themed one for your little ones to enjoy. This is less of a playground, however, and more of a simulated dig site for fossils. Don’t miss Dino-Sue, a full-size T-Rex skeleton that towers over the area.

Your mission, if you choose to accept it, is to rescue an Iguanodon from prehistoric times and save him from extinction. But hurry- the meteor storm is already happening all around you! I would classify DINOSAUR as a thrill ride in some respects- it isn’t a coaster, but the ride vehicle bucks back and forth and careens through the dark. Dinosaurs are around every turn, jumping out at the vehicle from the darkness. This is definitely a ride that would scare young children. First thing in the morning, this ride is a walk-on, because most park guests will head to the Safari or Expedition Everest. If you want to ride much later in the day, use FastPass+.

You’ve made it! We’ve taken a virtual tour around the entire Animal Kingdom park and described the rides and attractions that you’ll find in each area. Check out Part 2 of “Animal Kingdom 101” with information on dining, character greeting, and entertainment!