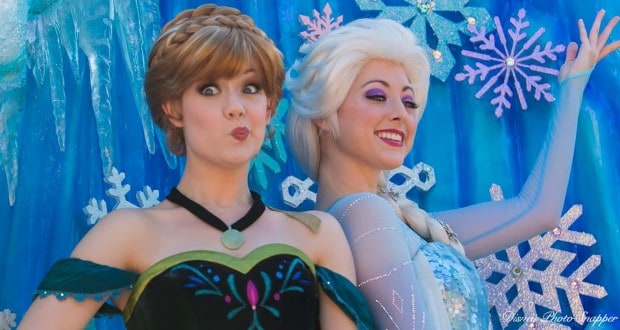 Anna and Elsa: 4 Ways to Get Face Time with the Frozen Sisters

“Frozen” has been extremely popular since its release in theaters, and its presence in the Disney parks does not seem to be ending anytime soon. Love it or hate it, it looks like the Frozen craze is here to stay. If you are looking to spend some time with Elsa and Anna (and maybe even Kristoff and Sven) this list is for you. With so much “Frozen” coming to the parks (like the new attraction coming to the Norway pavilion) I’m sure there will be more and more ways to get your “Frozen” fix. Read on to see what the current offerings are to see Anna and Elsa while vacationing at the Walt Disney World Resort:

The location with the best interaction available with the sisters from Frozen is going to be at Princess Fairytale Hall in the Magic Kingdom. This meet and greet experience allows guests to meet the two sisters (individually) and have these memories captured by Disney PhotoPass photographers. Lines can get quite long for this experience, and if you’re unable to get a Fastpass, I’d recommend coming early in the morning or later at night to avoid the long waits.

If you can’t make it to Princess Fairytale Hall, you can still get a glimpse of Anna and Elsa during the Festival of Fantasy Parade, which takes place daily at 3:00. While their appearance in the parade is quick (since they need to hurry back to their meet and greet) this is a nice alternative if you really want to see them but can’t spend the time at Princess Fairytale Hall. It’s also worth noting that if one of your hobbies is photographing Disney characters, this parade is an excellent time to zoom in on Anna and Elsa, as Anna is wearing her coronation dress, when she is usually only seen in her winter gear . If you’re spending the night in the Magic Kingdom, don’t forget to stick around in front of the castle for Celebrate the Magic—where Queen Elsa might just be making an appearance during each nightly performance.

2. For the First Time in Forever: A Frozen Sing Along Celebration

If you’re looking to get your fix with the Frozen girls at Disney’s Hollywood Studios, look no further than the Frozen sing along attraction. In addition to Anna and Elsa, this attraction also gives guests the opportunity to be entertained by the historians of Arandelle and to see Kristoff. This performance takes place multiple times throughout the day, making it easy to squeeze into any visit to Hollywood Studios. The Frozen sing along attraction will also eventually be leaving its location at the end of the Streets of America to the location of the former American Idol attraction, located more towards the center of the park.Hollywood studios is a great place to see other hard-to-find characters at Disney… Check out our article “12 Best Places to See Disney Characters at Hollywood Studios” for more information.

Depending on the time of year that you’re visiting the parks, you may have even more chances to see Anna and Elsa. It was recently announced that Frozen Summer Fun will be returning in 2015 to Hollywood Studios, allowing guests the opportunity to see the queen and princess in a daily procession down Hollywood Boulevard, as well as in the evenings during fireworks performances. While nothing has been confirmed for the 2015 holiday season yet, I would not be surprised if the Frozen sisters are to be heavily involved with the Magic Kingdom’s Christmas celebrations like they were last year. During last year’s events, Elsa took over for the Fairy God Mother in decorating Cinderella Castle with ice and snow, and there were also appearances by Anna, Kristoff, and Olaf. The two sisters, as well as Kristoff also led the way during the parade performed at Mickey’s Very Merry Christmas Party.