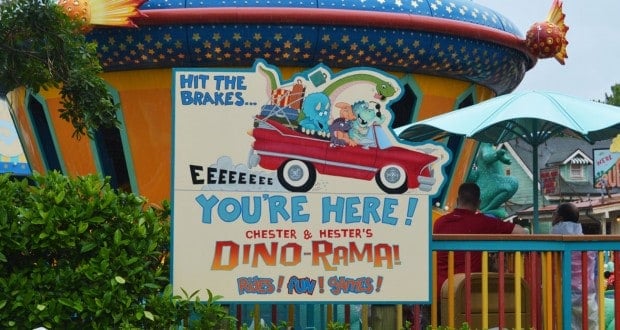 Dinoland USA, located at Disney’s Animal Kingdom, is definitely one of the most overlooked parts of the park. While the story here is less obvious than other areas, this part of the park can actually be quite interesting when you give it a chance.

10. The cast members are either “cousins,” or “interns”

9. The Dino Institute interns have taken over the radio

If you listen closely to the music around Restaurantosaurus and the Boneyard, you’ll notice that the radio show is actually hosted by two of the Dino Institute’s interns who have taken over the airwaves to play all kinds of fun dinosaur-related music. You can even hear them mentioning Dr. Marsh, who you can see as a guest in the preshow to the Dinosaur ride.

8. The Excavator: the roller coaster that never was

The Cretaceous Trail, which is the walkway between Chester and Hester’s Dino-rama and the Dino Institute (and the location of Donald’s meet and greet) includes one the largest collections of plant life that were around during the dinosaur age. In addition to the plants that you can’t see anywhere else, dinosaur sounds can be heard as you walk between the two areas of Dinoland.

6. The big, yellow, orange dinosaur has a name

The giant dinosaur that greets guests entering Dinoland from the Asia side of the park has a name—he’s Cementosaurus. What kind of dinosaur is he, you might ask? Why he’s a concretadorian of course.

When the Dinosaur ride originally opened, it was called Countdown to Extinction. After the movie “Dinosaur” came out, the name of the ride was changed and the Iguanodon seen outside of the ride building was redesigned to look like Aladar from the new film. Next time you go on the Dinosaur ride, look closely at the time rovers. Each car is labeled with “CTX” for “Countdown to Extinction.”

Dino-sue is the skeleton of a t-rex, located outside of the dinosaur ride. This full scale replica of an actual skeleton found by Sue Hendrickson in South Dakota (hence the name, Dino-sue.) The actual fossils are now on display at the Field Museum in Chicago, while the replica remains right here in Walt Disney World.

Back when McDonalds sponsored Disney parks, you used to be able to stop at carts for some fries in Dinoland. Even today you can find a couple of remnants of this sponsorship hidden around Dinoland. If you’re in line for the Dinosaur ride, look for the red, yellow, and white pipes labeled with chemical formulas. The formulas are for ketchup, mustard, and mayonnaise and are left over from the previous McDonalds sponsorship. In Chester and Hester’s Dinosaur Treasures, look around the walls closely and you’ll find an old McDonalds bag hanging up.

Chester and Hester were two locals to Dinoland, who lived in the county before the fossils were found that resulted in the Dino Institute. This duo was basically a couple of cheapskates, who wanted to use the fortunes of the paleontologists to make a quick buck for themselves. They turned their simple gas station into a gift shop (Chester and Hester’s Dinosaur Treasures) and opened a carnival midway on what used to be their parking lot (Chester and Hester’s Dino-rama.) A complete departure from the scientific side of things over at the institute, Dino-rama is meant to present a different side of dinosaurs, “big, green, and fun, the way they were meant to be!”

While many guests dismiss Dinoland as tacky, and a land that really does not belong in Animal Kingdom, the charm of Dinoland really is in the details. Next time you have some spare time, walk through each room of Restaurantosaurus, and take in all of the details of what was once the fishing lodge, but has since been taken over by the students from the Dino Institute. Listen to the radio show, wander through the Boneyard, and look up at the ceiling of Chester and Hester’s Dinosaur Treasures. There are so many small details in Dinoland that go unnoticed if you’re not actively trying to look for them.

For more magical info on Dinoland and Animal Kingdom, consider planning and booking your next Disney trip with an Authorized Disney Vacation Planner you can trust like Mickey Travels. They’ll help you get the best price for your vacation, share expert advice and their services are totally FREE! It’s genius!