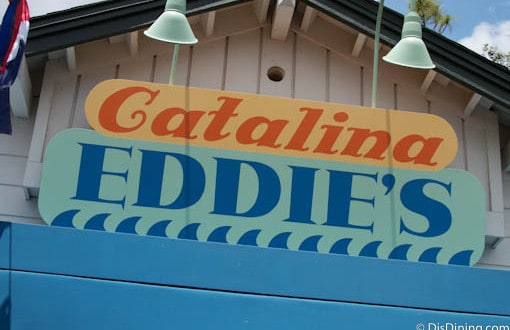 Are these 5 Disney Restaurants Ready for an Overhaul?

Walt Disney World in features some of the most amazing restaurants you’ll ever visit. Some of them, however, are getting older and unfortunately, a little outdated. Are these restaurants ready for an overhaul?

Located down Sunset Boulevard in Hollywood Studios, Catalina Eddie’s is a quick-service stop where you can get pizza, a salad, or a sandwich. This little restaurant could use a makeover, especially with all the changes being made in Hollywood Studios. It features a cute nautical theme, but serves no fish or seafood, and sticks out amongst the brighter colors Hollywood Studios features. This little shop has a lot of potential, and could be turned into something that not only looks more aesthetically pleasing, but still blends in with Sunset Boulevard.

In the middle of Liberty Square, this hidden quick-service shop needs an overhaul for one reason: expansion. This shop is incredibly cool because it offers different specialty waffles and funnel cakes all day long! It’s tucked away near the Christmas Shop in Liberty Square, so it’s not frequented as much as other shops, which is a waste because it is amazing. If the Magic Kingdom expanded on it, the shop would make a crazy amount of revenue and add a really cool restaurant in Liberty Square.

Electric Umbrella is located in Future-World in EPCOT, and unfortunately, it has become seriously outdated. While the theme is really cool, the actual execution of the theme is very outdated. The entire restaurant seems very 90s’, and could use a new coat of paint and some new light fixtures. This restaurant would need a simple update of furniture and design; there’s no need to completely alter the theme here. However, it’s just so outdated that if an imagineer chose to forgo the theme in place of a different one, it wouldn’t be the worst thing in the world.

This classic restaurant is located right by Pirates of the Caribbean in the Magic Kingdom’s Adventureland. While this used to be one of the most popular restaurants in the Magic Kingdom, it is not so anymore; in fact, this restaurant is only open at lunchtime. It’s a shame that one of the only real restaurants in Adventureland is only open for certain areas of the day. This restaurant could do with an overhaul that would allow it to remain open for longer times during the day. If the pirate theme isn’t working, they could re-do the theme so that it retains the Adventureland ideals and allows for guests to visit a quick-service restaurant without having to walk to Frontierland.

The ABC commissary is an Art-Deco themed restaurant located on Commissary Lane in Hollywood Studios. This restaurant needs a serious overhaul; it’s an older cafeteria type restaurant whose Art-Deco theme is outdated and seems very early 2000s’. It’s so big that there could be some amazing themes in this restaurant; it could be based on Disney Animation, it could be themed specifically towards Pixar movies, it could be anything! There are so many great themes that would fit better in this restaurant. Plus, ABC just doesn’t fit into the Hollywood Studios Park anymore with all the renovations they’re doing to expand and create a more immersive park.

Chloe is a double major in Theatre and Editing, Writing & Media in Tallahassee, FL who has almost no free-time, but often spends her busy days dreaming of the day when she can run away to Walt Disney World. Since she was little, she has begged her parents to take her on another Disney trip, often creating PowerPoint presentations to convince her parents to go. One day, she hopes to graduate from school and move to Orlando, get married in the Magic Kingdom, and work her life away Stage Managing or writing for Walt Disney World.