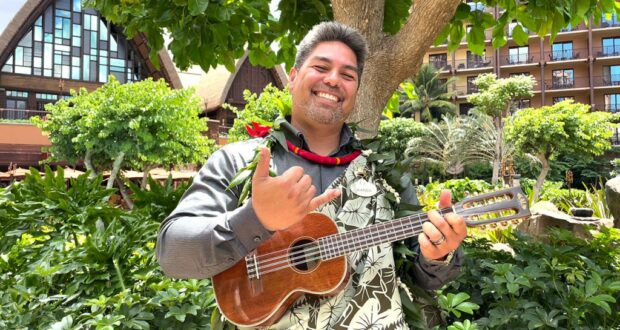 Aulani Resort Has A New Ambassador

One of Disney’s unique attributes as an employer is the Disney Ambassador Program and the Cast Members’ promotion process. Disney parks all over the world choose new ambassadors each year (with the exiting ambassadors’ input), and the Disney resort Aulani has just announced its newest addition to the ambassador program! Kanoa Kawai has been a performer and resort leader for Aulani, and now he is the next Aulani Disney Ambassador. The application process began early this summer, with Cast Members being prepared for interviews via informational lectures and sessions (and with the support of exiting Ambassador Alyssa-Lende Kane). Even though an ambassador might sound like a fairly specific position, requiring someone with a narrow focus in their work experience, Cast Members from almost every aspect of Aulani’s operations were interested in the position, and there was a very large number of applicants. To choose candidates from the wide net that had been cast, there were three different levels of interviews and activities, and the victor was Kanoa Kawai! He will now “wear the Ambassador pin” and “serve the cast of Aulani Resort in 2022 and beyond” as Alyssa-Lende Kane ends her role.

Kanoa has worked for Disney’s Aulani Resort since 2014 as a performer, and he switched into management (in the Entertainment sector) in 2019. He now works in Food and Beverage. Kanoa was understandably pleased by his progress with Disney and the Ambassadorship that is being bestowed upon him, saying the following: “Being a Disney cast member has changed my life and the direction of my professional career…I have the honor of being part of a company that makes dreams come true.” Kanoa is excited to “serve, lead and influence cast members”, and he expressed a strong desire to have “a positive impact on his cast around him”.

Alyssa-Lende, the previous ambassador, is moving on to be a front-desk manager in charge of leading and inspiring other Cast Members. As is the custom at Aulani Resort, she ‘passed the torch’ to Kanoa by giving him a makana (a gift) to him. The makana was an ‘umeke bowl, which is lidless so that stories may flow in and out of it.

As Alyssa-Lende said in the video below, “Passing on the Ambassador pin means carrying Walt’s legacy of the Ambassador program that started over 50 years ago…I’m so excited to present this ‘umeke bowl to Kanoa Kawai.” Kanoa added that he looks forward to sharing “the warm aloha that you’ll find in each and every one of our Cast Members here at Aulani, and the Disney magic.”  This ambassadorship comes just as Aulani is also celebrating its tenth anniversary! Have you visited Aulani and stayed in a hotel there, or gone elsewhere in Hawaii, and what is your favorite thing about Disney’s Ambassador program? Are you excited to see what Kanoa Kawai has in store for Disney Guests?