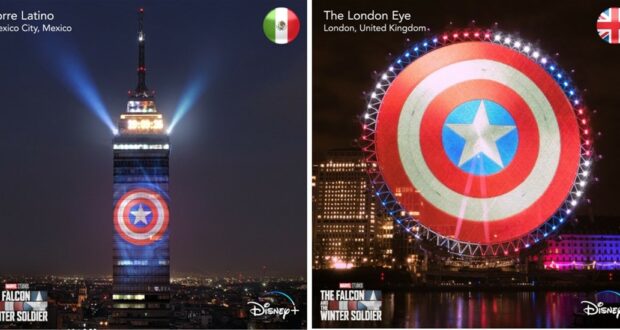 Disney+’s new original series, The Falcon and the Winter Soldier is now streaming on Disney+! We’ve checked out the first episode and have a review available here… but be aware that it does have spoilers. To celebrate the new series, locations around the globe are displaying Captain America’s shield in some impressive ways. Check out the photos below!

As share via Disney+ UK Twitter: “From London to Melbourne via Mexico City, we’re wielding The Shield across the globe. The first episode of Marvel Studios’ 6-Part Original Series #FalconAndWinterSoldier is now streaming on #DisneyPlus.”

We love it! Such a unique way to celebrate the launch of the new Marvel series. Catch the first episode on Disney+ if you haven’t already. Happy streaming, Disney/Marvel fans!