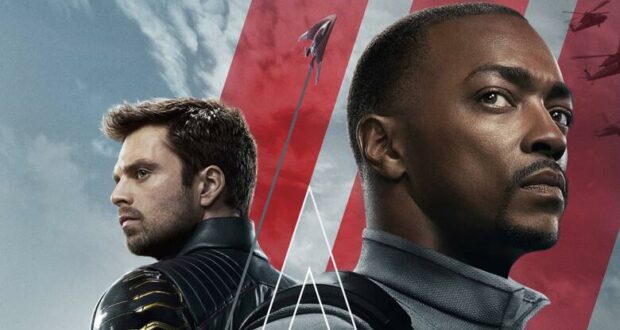 Disney+ released their second entry in the Marvel Television Universe this morning with the release of “Falcon and the Winter Soldier.”  The series focuses on the events after the blip that were the focus of “Avengers: Infinity War” and “Avengers: Endgame.”  As the title would suggest, viewers are invited into the post-blip lives of Sam Wilson, a.k.a Falcon, and Bucky Barnes, a.k.a The Winter Soldier.  We are introduced to the scope and tone of the series in the first of six episodes, but we are left with questions as to where the series intends to take the viewers as it moves forward.  As we progress into the review…SPOILERS AHEAD!

Seriously…don’t continue to read if you haven’t watched the first episode yet!

The show opens with Sam Wilson pressing his shirt and engaging in an internal debate surrounding Captain America’s shield that is on his bed.  After the title flash, viewers are taken to a military operation where Falcon is assisting in the recovering of a hijacked plane with military personnel still aboard.  The visuals and drama are akin to anything that we’ve seen in the movies, so viewers do not have to worry about any kind of storytelling letdown with these characters moving to the small screen.

After the mission is completed and Sam has had a debriefing with one of the military personnel, we find Sam back in the country in Washington D.C. and in civilian clothes at the Smithsonian Air and Space Museum for a dedication for an exhibit to Captain America.  At the dedication ceremony, Sam donates the iconic shield to the museum and we see the shield being encased into a locked display case.  After the ceremony, Sam shares a conversation with James Rhodes, a.k.a War Machine.  The two talk about why Sam gave up the shield and didn’t step into the role as Captain America as Steve had wanted him to do in the closing minutes of “Avengers: Endgame.”

We find Bucky living alone and plagued by nightmares from his time as the Winter Solider.  Before startling himself awake, we see a fight scene that ends with Bucky shooting a bystander on one of missions.  His suffering is so intense that he is in therapy to work through his issues with a psychiatrist, who we learn is also ex-military.  The psychiatrist examines Bucky’s phone and sees that Bucky has disengaged from most contact with others and is ignoring messages from Sam.  She encourages him to confront his growing alienation and engage with those around him.

Viewers learn that Bucky has been putting some of the therapy to use by making friends with an elderly man and a bartendress at a local bar.  Bucky goes to lunch with the man and they have have an easy rapport as the older man teases Bucky and encourages him to ask out the bartendress.  We do see later in the episode that Bucky moves in that direction when she challenges him to a game of Battleship while the bar is slow.  What we also learn as it relates to Bucky and his attempts to forge connection:  first, he is currently 106 years old, and, two, the old man is the father to the bystander that Bucky shot during an earlier mission that was the feature of his nightmare.

The show also introduces some of the fundamental background questions surrounding being a hero and the repercussions of the Blip.  Sam returns to Louisiana and to his family and attempts to help them get a loan to support their business.  What follows is an entertaining scene where the loan officer asks how super heroes get paid after questioning how he knows Sam.

We are left at the end of the episode without our two main characters meeting up or interacting and with the introduction of a new Captain America introduced by the Department of Defense — Sam had been communicating with Torres who had been on a reconnaissance mission regarding a group known as the Flag Smashers and watches the introduction on television with his sister.  The new Captain America comes out, shield in hand (is it the same one Sam had given to the museum?), and winks at the crowd before the credits roll.

The show is a bit longer than an episode of “WandaVision” clocking in at about 42 minutes long — and to the chagrin of all of us, no mid or post-credit scene on this episode.  What did you think?  Are you curious about the mission of our two characters?  How do you think the new Captain America figures into this?