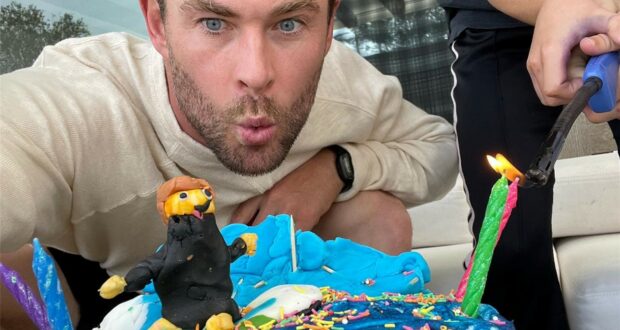 Happy Birthday to the one and only, Chris Hemsworth! This iconic actor has taken the Marvel Universe by storm with his powerful role as “Thor” in eight Marvel Cinematic Universe films. Much of the Marvel Universe focus has been placed on another Marvel star, Scarlett Johansson (AKA Black Widow), for her lawsuit against Disney, and now Disney cutting all ties with Johansson by putting the “Tower of Terror” film production on hold. It’s good however to see a Marvel actor share his charming smile amidst the Marvel chaos! It looks like Hemsworth put his Thor hammer down to enjoy some time with his family for his 38th birthday on August 11, 2021.

As shared by Chris Hemsworth via Facebook: “Thanks for all the birthday messages! Had an epic day with the family and succeeded in devouring 75% of this cake that my kids made before collapsing into a giant sugary heap of joy. Love you all! Cheers”. Check out the sweet photos below:

How adorable is that?! It looks like the kids did an excellent job with the cake. We’re pretty sure that’s supposed to be Chris surfing on top of the cake? Plus, all the sprinkles are the best!

Want to experience Hemsworth in another way besides the Marvel Universe? Check out the National Geographic series called “Limitless with Chris Hemsworth.”

If you can’t get enough of Chris Hemsworth as Thor, have no worries as he plans to stick around for some time! We previously shared his thoughts on the future of Thor where he shared, “I’m not going into retirement. Thor is far too young for that. He’s only 1500 years old!” Happy Birthday, Chris, and well done to those talented cake makers of yours!