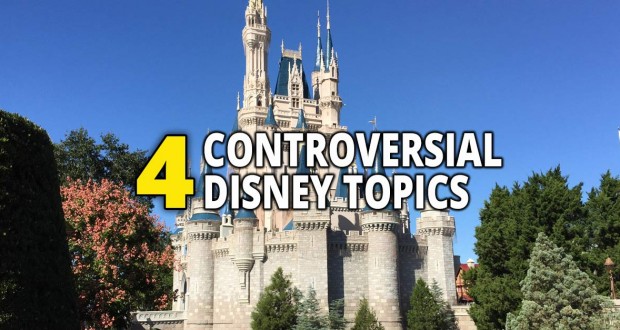 4 Controversial Disney Topics That Might Get You Into a Fight, Cont.

Did reading “5 Controversial Disney Topics That Might Get You Into a Fight” leave you thinking, “but there are more controversies not covered here”? If so, check out our follow-up article. In this article, we’ll look at 4 more controversial topics that are sure to get you primed and ready for a healthy Disney debate.

The FastPass system has certainly seen some major changes over the years. One of these changes has been the addition of reserved viewing areas for parades and shows. Why, exactly, is this even slightly controversial? If you’ve used a FastPass for a parade or show, you’ll find that the reserved viewing area is a fairly large space that still has room for “good” viewing vs. “optimal” viewing. Let’s take the area reserved for FastPass viewing of the Magic Kingdom’s “Festival of Fantasy” parade as an example. Cast members are supposed to allow you into the area, located in the hub area by the castle, approximately 30 minutes before the parade. However, sometimes this time is not enforced strictly, and people are let in much earlier than 30 minutes prior. The idea behind having a FastPass is so that you don’t have to stake out a spot early, right? Well, the reality is that you can arrive to your FastPass+ viewing area and still find that people who arrived earlier than you are seated or standing in front of you. The idea of using a FastPass and still having to arrive early to secure the best view might be frustrating to some people. The viewing areas are usually great, but is standing 3-deep for Illuminations in a special viewing area really any better than standing 3-deep in any other location along the World Showcase lagoon?

There are many extra special events at Disney World, referred to as “hard-ticket events”, that occur mostly around the holidays. These events require a special ticket, which, of course, is an extra charge above your regular park admission. Some of the events include Mickey’s Not So Scary Halloween Party, Mickey’s Very Merry Christmas Party, Night of Joy, Villains Unleashed, and the more recent additions of Harambe Nights (Animal Kingdom) and After Hours Wind Down (Epcot). Other add-on experiences, like the Wishes Dessert Party at the Magic Kingdom, afford you a reserved (for a cost, of course) viewing area of a show as well as extra perks (in this case, a dessert buffet). To add to the confusion, Disney recently announced a special addition to Mickey’s Not So Scary Halloween Party: “The Villains’ Sinister Soiree: A Wicked Takeover of Cinderella Castle” Premium Dessert Party. This is an add-on experience (with a $99 price tag) to what is already a hard-ticket event that costs $62-$77 per adult. This is in addition to whatever park admission you may have paid for the majority of the day.

Special events are, indeed, special! Are they worth the cost? Many people think they are. What has people talking as of late is whether or not Disney has gotten a bit out of hand with the amount of special, extra-charge events. Is this an attempt at providing more magic to guests, or purely a money-making move?

I love all things Disney, but I admit that when I heard that AVATAR was coming to the parks, I was a bit surprised and confused. It appears that I’m not alone. While some people are excited, it seems that a lot of people feel very negatively about it. Why are people unhappy? First, the critics think that AVATAR (the movie) isn’t family friendly, as evidenced by its PG-13 rating. (Other popular film franchises, such as Guardians of the Galaxy and Pirates of the Caribbean, are also rated PG-13 and have increasing presence in the parks.) They also cite the fact that AVATAR is several years old, and that AVATAR isn’t focused on animals and therefore does not fit thematically into Animal Kingdom. On the other hand, people who are excited about the expansion remind us that there are three sequels to come (2016-2018) and that AVATAR actually does focus heavily on conservation and man’s impact on the environment, which is highly related to the mission of Animal Kingdom.

Where do you fall in this controversial debate? Do you have a staunch position already, or are you waiting to see the new land unveiled to make your decision? If you’re interested in reading more about the Pandora: Land of Avatar, check out our article “AVATAR Is Coming to Animal Kingdom- 4 Reasons Naysayers Aren’t Happy and 5 Reasons Why They Should Be.”

4. Giving up your seat on the bus

At the end of a long day in the parks, no one really wants to stand on a bus. There is some controversy over whether or not anyone should have to give up his or her seat on the bus, and if so, who. Disney message boards are full of comments like, “I can’t believe this able-bodied young person didn’t stand so I could sit down with my child.” I don’t doubt that there are people who are just a bit selfish and want to be seated at the end of the day, but there are also people who may have good reason not to give up their seated positions. Some argue that you should always give up your seat to a child or a parent holding a young child, someone who is elderly, or a pregnant guest. There are plenty of times where I have seen this courteous seat-exchange occur.

However, there are also times when people don’t give up their seats and are judged for doing so because they appear to be “able-bodied.” Regardless of what your personal rule is about giving up your seat, it’s important to remember that not all people who don’t appear to be disabled in some way aren’t, in fact, living with an unseen disability or are truly exhausted and can’t stand another minute. The woman who is pregnant and not feeling well, but isn’t necessarily showing, might not be up for standing any more. The person with a raging blister on his foot may really need the relief of a seat. The man with a bad back or sciatic nerve issues may double over in pain if he has to stand any longer. Sure, these people all “managed just fine in the parks all day” according to onlookers, but sometimes people reach their limits.

Have you ever been in a “Disney debate?” Can you think of any more Disney “hot topics” that we haven’t covered? Let us know!