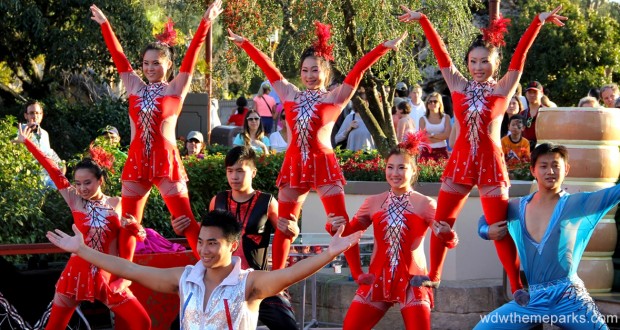 You won’t find a daytime parade at Epcot or any large capacity stadium shows, but Epcot has plenty of entertainment throughout the park- you just have to know where to look. It’s more than likely that during your stroll through the World Showcase, you’ll happen upon at least one or two of these performances. Here’s a guide to what you might find. Grab a times guide in the park and make a point of getting a drink or snack and enjoying the acts that interest you. They’re all fabulous and sure to provide a nice, relaxing break to your busy park touring day. Keep in mind that not all acts perform every day.

Before we even get to the World Showcase, here’s a Future World performance that’s worth a mention. At first glance, they may look like a cleanup crew, but you’ll quickly learn that the JAMMitors are actually skilled percussionists. When they declare loudly that it’s “break time”, you’ll be entertained by trash cans, lids, dustpans, plungers, and other tools.

Let’s start our journey through the World Showcase in Mexico. Here, you’ll find Mariachi Cobre. This mariachi style band is made up of guitarists, violinists, and trumpeters performing the folk style music of Jalisco, Mexico. When Mariachi Cobre is not performing, you may find Viva Mexico performing instead. Viva Mexico is Mexico’s second musical offering, showcasing music and dance from all over Mexico.

You’ll be dazzled at this outdoor show, located in the China pavilion. Watch the acrobats climb, tumble, juggle and roll with ease, using their own bodies as equipment. I was particularly impressed by the young woman who spins a table (yes, a table) on her feet, kicking and spinning it high into the air and catching it on her toes. There’s enough variation in this act to keep it really interesting. It’s cultural but fun at the same time.

Our next stop is Italy. Nestled between the tall buildings in Italy, you’ll find a beautiful piazza. If you’re lucky, you might spot Sergio, Italy’s street performer. Sergio is a mime who just also happens to have some serious juggling skills. He might even need some help from the audience if you’re willing! This is an act that children are bound to enjoy.

The name of this group is a giveaway. Obviously, you’ll find the Spirit of America Fife and Drum Corps in the American pavilion. The act is exactly what you would expect- patriotically dressed fife and drum players, an American flag, and plenty of traditional American tunes!

You’ve made it halfway around the World Showcase, so a break to enjoy a seat and some air conditioning is in order. Before you leave the American pavilion, step inside to hear the Voices of Liberty. This fantastic a cappella group performs classic American standards as well as a Disney tune or two!

Now that you’ve had a little break in the American Pavilion, head to Japan to check out Matsuriza. This troupe performs a traditional form of Japanese drumming called Taiko. The drums are huge, and the performers often strike in perfect sync with each other, making this act a delight for the eyes and ears.

Here’s another upbeat musical act that everyone in your family will love. Can you guess where this one is located? If you guess that “Mo’Rockin” is in the Morocco pavilion, you’d be correct! Mo’Rockin is comprised of 6 musicians and a belly dancer performing Middle Eastern and African music with a bit of an edge. This is one of my favorites!

Just a few more countries to go! You’ll find another “amusing” acrobatic act in France. If you happen to see a chef pushing a cart full of chairs through the pavilion, take a second look. The waiter setting up a table and some bottles of wine isn’t giving our free samples. Serveur Amusant is actually an acrobat who balances on some unlikely props. Eventually, the waiter will be atop an impressive stack of chairs, wine bottles, and a table!

Now we’ve arrived in the United Kingdom, where you’ll find the World Showcase Players. This group of comedic street performers relies on guest participation. There’s always an outgoing dad in the crowd willing to participate in the storytelling, and the show is great fun.

Who doesn’t love a good cover band? Stick around the United Kingdom for a bit longer and head over to the garden. It’s time to introduce your kids to all the music you loved “back in the day.” The British Revolution plays popular covers from legendary British bands, including The Beatles, Queen, Led Zeppelin, and The Who. When performing outside of Disney World, the British Revolution is known as the British Airwaves.

Last but not least is the Canadian pavilion. If you hear bagpipes and electric guitars, don’t keep walking! Have a seat at the small bandstand in the pavilion and enjoy Off Kilter! This kilt-clad band is a favorite of many World Showcase travelers. The Celtic rock band will have you clapping, stomping, and dancing to a mix of and well-known tunes as well as traditional songs.

Although viewed more as attractions than entertainment performances, the World Showcase offers several beautiful cultural films in some of the countries. The film in France, for instance, is every bit as breathtaking as the Soarin’ film (although you’ll stay firmly planted on the ground for this one). Canada also has a beautiful film, shown in Circlevision (the screen surrounds you entirely, 360 degrees). In America, you can also catch a showing of “The American Adventure”, an inspiring film about our nation’s history.

Epcot has plenty of seasonal entertainment that coincides with the various festivals that occur during the year. In the summer, be on the lookout for the “Sounds of Summer” concert series. You’ll also be treated to additional entertainment selections and demonstrations during the Food and Wine Festival, as well as the Flower and Garden Festival.

Epcot’s nighttime show, IllumiNations, is truly an experience that can’t be missed. Find a spot to stand in the World Showcase (up to an hour before the show for a great spot) and prepare to be immersed in this spectacular show. The World Showcase takes on an entirely different look at night, with lights twinkling and buildings lit up in every country. 30 minutes before the show, a soundtrack is played throughout the World Showcase. Then, as the show begins, torches blaze along the water. The atmosphere is one of magic and anticipation.

Once the show begins, you’ll be amazed by pyrotechnics, fireworks, laser lights, and water effects. You’ll also see a massive globe move toward the center of the lake, as if floating on the water. Inspiring images of people, countries, and landmarks around the world are projected on the globe itself. The fireworks finale is one of the best you’ll ever see.

I’ll admit that there are a few acts on this list that I’ve yet to enjoy. Epcot has so much to offer, especially if you are willing to slow your pace as you explore the World Showcase. Which acts on the list are your favorites? Which ones are on your “must see” list for your next trip? Share your response in the poll below.