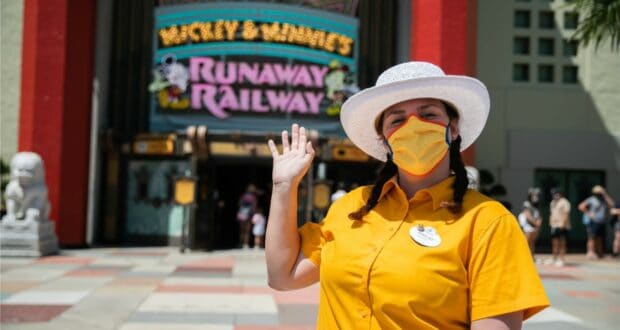 July 30 was a big day at the The Walt Disney World Company. Not only did both Disneyland and Walt Disney World return the requirement for masks to be worn while indoors for guests 2 years of age and up (even if vaccinated), they also made a big announcement that they are now requiring Cast Members of The Walt Disney Company to get the COVID-19 vaccination. Earlier this week we shared the news that Orange County is under a new state of emergency due to the rise of COVID-19 infections which is the reason for the spiral of safety measures. Currently, Disney has announced they are requiring all of their non-union hourly and salaried employees across the U.S. to get the COVID-19 vaccine. They are however now in discussion with union representatives to discuss mandatory vaccination for union Cast Members as well.

As reported by OrlandoSentinel: “Disney also has started conversations with unions that represent employees under collective bargaining agreements. Disney has told the union that represents 9,000 attractions and custodial workers at Walt Disney World that the company would like to bargain about mandatory COVID-19 vaccinations, said Unite Here Local 362 president Eric Clinton. The union’s members have been surveyed, and there is support for everyone getting inoculated, Clinton said.”

Unite Here Local 362 took to social media to share the above photo along with, “Leaders and members of Local 362 are vaccinated! The COVID-19 vaccines are safe and effective. Get yours today so we can fight for a better tomorrow!”

Orlando Hotel and Restaurant Workers Movement Local 737 Unite Here also took to social media to share, “We have seen Disney’s statement regarding mandatory vaccination for salaried and non-union employees. We will meet with Disney next week to discuss how this policy will apply to unionized employees. We will post information for union members here as soon as we have it.”

Disneyland Resort Worked United Local 50 took to Facebook to share: “Disney has announced it will require all salary and non-union hourly employees to vaccinate. We will begin conversations with Disney regarding mandatory vaccination of Union members in the coming weeks. We will keep everyone posted as this develops. In solidarity, Chris Duarte – Workers United Local 50 Vice President”

While the response to Disney now requiring Cast Members get the COVID vaccination has been mixed, The Walt Disney Company has now joined an already growing list of massive companies mandating COVID-19 vaccinations. Google, Facebook, Twitter, Netflix, Lyft and Uber, are just a few of them. We’ll keep you posted as we learn more about the decision making process between the Union representatives and Disney.