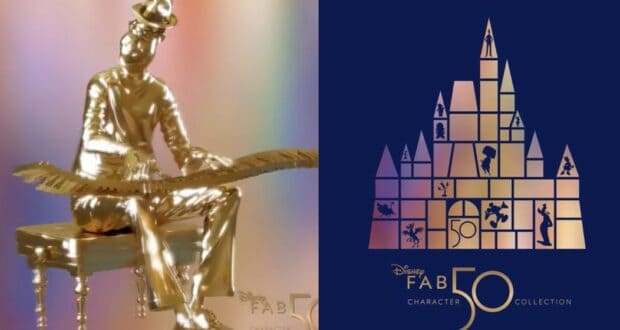 Bring on October 1! As we inch closer and closer to Walt Disney World’s 50th Anniversary – “The World’s Most Magical Celebration” – we continuing to follow along with all the exciting news flowing out of Disney. Walt Disney World has plenty in store such as two new nighttime spectaculars including “Disney Enchantment” at Magic Kingdom and “Harmonious” at EPCOT. We’re also following along with the new golden statue characters that will make up the “Disney Fab 50” sculptures. Who’s ready to scavenger hunt for 50 fabulous golden sculptures?

Beginning October 1, guests will have a chance to scavenger hunt through all four parks to virtually “collect” each golden Disney character sculpture on Instagram. So far, we know Mickey Mouse, Goofy, Timon and Pumbaa, Lumiere and Cogsworth, Daisy Duck, Winnie the Pooh & Piglet, Edna Mode, and Dante are joining the Fab 50. Now, we’re learning a Soul character is making the Fab 50 list. That’s right – Joe Gardner from Soul will be taking his place among the Fab 50 sculptures. He isn’t however going where we’d expect him to be!

As shared via Pixar Instagram: “Cue the band! Pixar Soul creators, Pete Docter and Kemp Powers have revealed that Joe Gardner is part of the “Disney Fab 50 Character Collection” that you’ll soon find across the four @WaltDisneyWorld theme parks during “The World’s Most Magical Celebration” starting October 1 #DisneyWorld50”

The Instagram video says Joe will be available at Disney’s Hollywood Studios beginning October 1 which was a surprise to us! We were thinking if Joe found home anywhere it would be at EPCOT, among the ‘The Soul of Jazz: An American Adventure’. It looks like Disney is going to keep us on our toes with this scavenger hunt! Are there any characters you’re hoping Disney will add to the “Disney Fab 50” line up? We’ll keep sharing the news about which characters are included as Disney keeps it coming!