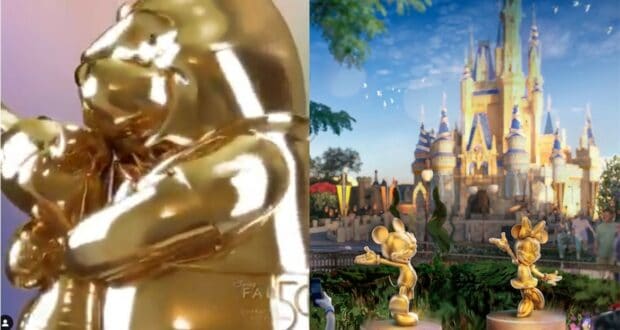 Let the sculpture count continue! As we prepare for Walt Disney World’s 50th Anniversary – “The World’s Most Magical Celebration” – Disney is sharing more and more news on what excitement we can expect during the 18-month long celebration kicking off on October 1. As if two new nighttime spectaculars including “Disney Enchantment” at Magic Kingdom and “Harmonious” at EPCOT aren’t enough – Disney is adding new golden statue characters that will make up the “Disney Fab 50” sculptures. We’ll be able to look for the 50 sculptures as they will be spread throughout Magic Kingdom, EPCOT, Disney’s Hollywood Studios and Disney’s Animal Kingdom.

Beginning October 1, guests will have a chance to scavenger hunt through all four parks to virtually “collect” each golden Disney character sculpture on Instagram. So far, we know Mickey Mouse, Goofy, Timon and Pumbaa, Lumiere and Cogsworth, Daisy Duck, and Edna Mode are joining the Fab 50. Now, we’re learning another beloved duo is joining the line up! Winnie the Pooh and his best pal, Piglet will be available at Magic Kingdom!

As shared via Disney Springs Instagram: “Exciting news! George A. Kalogridis, Walt Disney World 50th Global Ambassador, has revealed that Winnie the Pooh and Piglet are part of the “Disney Fab 50 Character Collection” that you’ll soon find across the four @waltdisneyworld theme parks during “The World’s Most Magical Celebration” starting October 1! #DisneyWorld50”

These two will be adorable to see together at Magic Kingdom! We’ll be on the look out for them and all the “Disney Fab 50” beginning October 1. Are there any characters you’re hoping Disney will add to the “Disney Fab 50” line up? We’ll keep sharing the news about which characters are included as Disney keeps it coming!