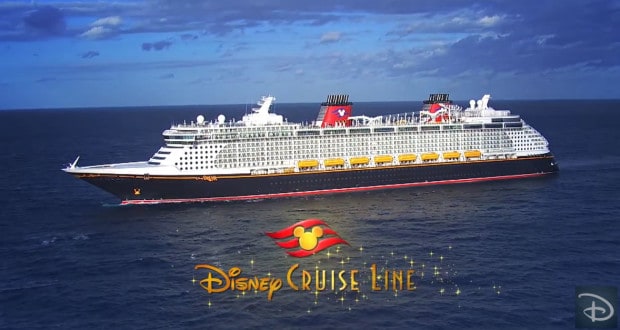 Disney Cruise Lines Require Vaccines For Ages 12 and Up

With the current COVID-19 pandemic continuing and worsening, Disney has just expanded its safety measures by requiring vaccinations for anyone 12 and up who wants to go on its cruises. The Disney Cruise Line announcement was shared by Ashley Carter today, with the following information attached: 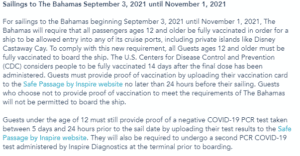 Ashley Carter accompanied the image with the following Tweet: “In response to the latest restrictions issued by the Bahamas, Disney Cruise Line has announced that starting September 3 it will require all passengers ages 12 and older to be fully vaccinated to board its ship.” Inside the Magic also confirmed this news, including the statement from Disney that “Approved vaccines include those produced by Pfizer, Moderna, AstraZeneca and Johnson & Johnson“, and the Disney Cruise Line site states that their “focus remains on operating our ships in a responsible way that continues to create magic for all on board”.

The requirement for travel to the Bahamas, aboard the Disney Dream, will be effective until November 1st at least, and a vaccination will be considered complete only 14 days after it’s been administered. Guests under 12 will also have to get negative COVID tests 5 days to 24 hours before the cruise. Sailings are setting off in a “gradual, phased approach“, so the September 4th Fantasy cruise is cancelled, and even though the Disney Fantasy’s cruises will resume on September 11th, they will only be 4-day ones. Seven-day cruises will not resume until further notice. Refunds or cruise credits have been offered to Guests who signed up for the now-cancelled cruises.

The announcement comes in tandem with the Bahamas’ recent restrictions keeping unvaccinated passengers from arriving on ships (including on Castaway Cay, Disney’s own island); without land to make port, the Disney Cruise Line would not have been able to proceed with their  Disney Dream cruises anyway.

We will continue to keep you updated on this breaking news.