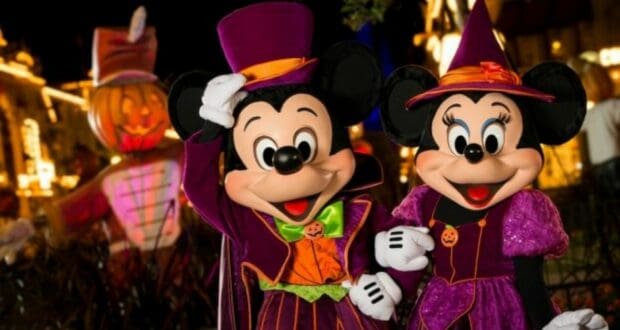 Can you believe it? We are almost halfway to the frightfully fantastic holiday of Halloween! Disney knows how to throw a party, so why not celebrate being halfway to Halloween? That’s exactly what Disney plans to do and is teasing us Disney fans with an upcoming “spooky announcement”.

We’ve eagerly been awaiting word on if and when Walt Disney World Resort will once again hold a Halloween Party in 2022. While we assume they would never turn down a Halloween Party, the new Disney After Hours Boo Bash was met with some disappointment in 2021 in comparison to the special-ticketed party it replaced, Mickey’s Not-So-Scary Halloween Party.

Whether it be the return of the Boo Bash or Mickey’s Not-So-Scary Halloween Party (pretty please!), we surely hope Disney plans to throw a huge Halloween party as usual at Magic Kingdom Park as well as at other Disney Parks and Resorts for 2022.

Now, Disney is teasing Disney fans as they are dropping Halloween surprises. Take note that Thursday, April 28, 2022, is Disney’s true Halfway to Halloween celebration and they are hinting at some “spooky announcements”. Could this finally be the Halloween party news we’ve been waiting for?

Disney has announced, “During our big, daylong #HalfwaytoHalloween celebration on Thursday, it’s nothing but treats as we share several frightfully fantastic Disney Parks Halloween and other spooky announcements that you won’t want to miss. And we’ll be your ghost host for a first-of-its-kind @DisneyParks TikTok Live beginning Thursday at 10 p.m. ET/7 p.m. PT.  It’ll be the first time we’re live from multiple Disney Parks locations including Disney Cruise Line featuring some fa-boo-lous surprises.  You can also expect some mummy-approved “shriek peek” surprises, a new “Hocus Pocus” Sanderson Sisters-inspired look for all of our Disney Parks channels and much more.”

What do you think the spooky announcements will be? We’re keeping our fingers crossed it’s Halloween party news! We’ll be sure to share any details as soon as Disney releases them.