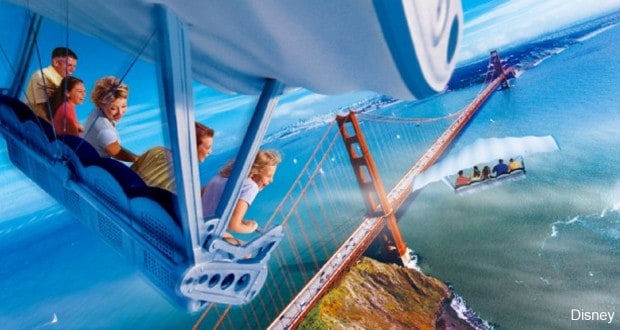 Typically the term ‘thrill rides’ describes extreme rollercoasters. But Walt Disney World doesn’t just use rollercoasters in order to thrill its guests (though this list has plenty of those). Disney creates immersive magical experiences within each park, many of them leaving you absolutely awe-inspired or breathless with exhilaration. Here are some of the best experiences Disney World offers that are sure to thrill you (I’ve limited this particular list to those with story elements that enhance the thrill). I’m also providing an intensity index to give you an idea how extreme these attractions can be:

10. Test Track – In this design-your-own-experience iteration at Epcot, guests have the ability to ‘test’ a vehicle according to variations based on choices they make while in the queue. The thrills are pretty moderate until your car almost crashes into a wall sliding door that releases you into the Florida sun at speeds of 65 mph. You race along the outside of the circular building at an angle that leaves you wishing for a couple more times around by the time it’s over. (Intensity index – 6)

9. Splash Mountain – As a kid, I would ride this at the Magic Kingdom with a mixed sense of enjoyment and foreboding. I preferred the lead up story with Brer Rabbit, Fox, and Bear but was anxious over the drenching drop you always sense is coming. Now, I tolerate the story so I can get to the thrill of weightlessness mixed with water spray. Plus, those couple of fake outs throughout the ride make it fun when riding with first timers. A slippery jaunt through the Laughing Place is a fun, intermediate passage before the anticipated briar patch, yet whimsy changes to ominous during the long ascent. The whole ride sets the stage perfectly for the big drop and thrilling escape into the water tunnel. (Intensity index – 4.5)

8. Soarin’ – This thrilling Epcot experience gives you the tremendous sensation of flight while only hovering about 80 feet in the air. Born out of an Erector’s Set design, Soarin’ will have you chuckling with the pre-flight speech by Patrick Walburton before lifting you above the heights of beautiful California scenery. Add some minor in-flight movement, a few realistic smells to heighten the senses, a rousing score by Jerry Goldsmith, along with the rush of wind in your face and your experience will usually be capped in a descent peppered with applause from sheer delight. The only thing that will keep some people away is a fear of heights. This experience looks to be even more thrilling in the future as enhancements are rumored for 2016 with scenes from around the world projected with a higher quality picture. (Intensity index 2.5)

7. Star Tours – This gem located at the Hollywood Studios almost begs you to ride it again the second you get off. Not only do you get to experience environments right out of the Star Wars movies, but each simulation ride sends you on a completely different journey. Fans of the movies finally have the ability to enjoy a combination of two of the following experiences: the Wookie planet Kashyyyk, the snowy peaks of Hoth, a podrace through Tatooine, the blitzing air traffic of Coruscant, a battle on the Death Star, or the underwater city of Naboo at light speeds! The digital 3-D, pre-show, and character interaction make this a truly out of this world thrill. (Intensity index – 4)

6. Dinosaur – Disney upped the ante on this Animal Kingdom experience. Because of a rule breaking time traveling scientist, you are sent on a journey to steal… time-displace… befriend a lovable Iguanadon right before a global catastrophe. Of course, this plan isn’t foolproof but you saw that coming and strapped in anyway. So if you’re counting your options, once you embark you will either a) be eaten by a Carnotaurus, b) be wiped out with all the other dinosaurs by an extinction-level meteor, or c) face the wrath of Mrs. Huxtable. The realistic Cretaceous setting, out of control land-rover movement, chase scene, thunderous roars in the dark and the finale pose make for a thrilling adventure! (Intensity level – 6)

5. Space Mountain – This classic attraction in the Magic Kingdom still thrives off its twists, turns, and dives through the expanse of space. By designing indoor rollercoasters, Disney has been able to create and control the atmosphere, allowing for an exhilarating experience. It also keeps these rides open in the inclement weather Florida is accustomed to. The darkness is certainly useful in giving guests the sensation of darting through space in your rocketship. It also hides how close you actually are to the coaster framework (is anyone else afraid to raise their arms on this ride?). (Intensity level – 6.5)

4. Twilight Zone Tower of Terror – When approaching the Hollywood Tower Hotel (found appropriately at the Hollywood Studios), guests know they are in for more than a run-of-the-mill attraction. Picture if you will: a line that forces guests to take in the garden grounds (especially creepy when misty) and the noticeably undisturbed lobby until the awkward hotel staff check guests into their stay. A detour into the library ensures guests know the hotel’s story they themselves are about to experience, which ultimately culminates in the psychological thrill of several randomized drops and lifts in a supernaturally possessed maintenance ‘elevator.’ (Intensity level – 7.5)

3. Expedition Everest – Disney certainly makes use of the space allotted for lengthy wait times. Each room in the queue fictionally prepares guests with the necessities for a mountain hike up Everest… and a potential confrontation with the fabled Yeti. This rollercoaster train thrusts you backward into a mountain cavern after reaching the highest point (and making you sit up there for a nervous moment). The Yeti gets involved twice during the experience to make sure guests fly down the mountain from whence they came at breakneck speed! (Intensity level – 7.5)

2. Rock’n’Roller Coaster – Located at the Hollywood Studios, the one rollercoaster not associated with a mountain leaves you with the next best thing. Exactly! A race through L.A. for an Aerosmith concert, naturally. Complete with inversions, darkness and backstage passes (these are promised though never delivered), this coaster’s claim to fame exists in the initial launch. Guests experience 4.5 G into the first inversion (that is more than astronauts encounter on shuttle launches) with a max speed of 57 mph as Aerosmith music is pumped into personal ride-car speakers. Riders fall into one of two categories: screamers or singers. Which one are you? (Intensity level – 8).

1. Fantasmic – After a long day at the parks, Disney always wants guests to leave amazed. For a thrilling end to a memorable day, look no further than the Hollywood Studios nighttime show, Fantasmic. Blending together components of familiar Disney stories, characters come to life to demonstrate the power of imagination. Our hero, Mickey Mouse, endures a cast of villains to triumphantly capture our imagination in the process with a finale that’ll leave you in tears as you cheer for this beloved character. Great water effects, a riveting score, and several impressive pyrotechnics accompany this awe-inspiring performance! (Intensity level – 2.5).

– Do Roller Coasters Freak You Out? Top 10 Rides At Disney For Non Thrill-Seekers