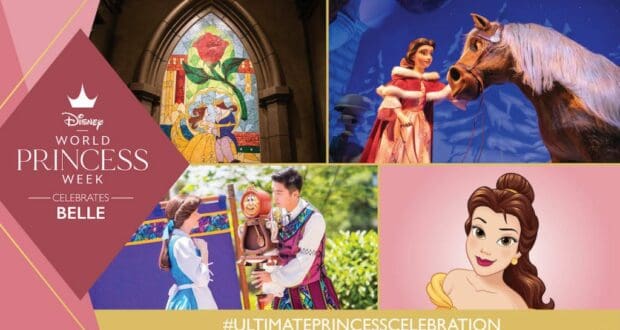 Disney’s Bookworm Gets A Big Moment in World Princess Week

We already had a hunch about who Saturday’s honored Disney princess was going to be for World Princess Week, since there was a hint released yesterday during Mulan’s day, and we were correct! Today’s special princess is “The Beauty and The Beast”‘s Belle, the ingenue from France who willingly becomes a captive for a cursed Beast in his castle after her father, an eccentric inventor, accidentally attracts the Beast’s ire. While a captive in the castle, Belle becomes intrigued by the Beast, who is being encouraged by his enchanted household items to win the girl’s heart and break the spell, and they eventually fall in love. Belle is many Disney Guests’ favorite princess, since her intelligent nature and spunky personality made her such a formidable match for the Beast (who conveniently turns out to be a handsome prince), so it’s no surprise that she’s being chosen for the final day of World Princess Week. Keep reading to find out how Disney resorts all over the world are celebrating her!

In Walt Disney World, EPCOT’s Palais du Cinema is the place to go if Guests want to see a short film that includes songs from Belle’s classic film by Walt Disney Animation Studios classic. It’s a tale as old as time, being narrated by Angela Lansbury, the voice of Mrs. Potts in the Beauty and the Beast film.

After viewing the film, head to the Magic Kingdom’s Be Our Guest Restaurant and have French cuisine in the Grand Ballroom, the West Wing from the Disney movie (featuring the Beast’s enchanted rose), or Belle’s romantic library in the Castle Gallery (which was a gift from the Beast). The Castle Gallery also features the famous ballroom dancing scene between Belle and her Beast!

After dinner, head to the “Beauty & the Beast Live on Stage” show at Disney’s Hollywood Studios, which has recently returned, and enjoy this movie’s story as a wonderful Broadway musical! “The Beauty and the Beast” always excels when it comes to scenery, costumes, music, and an endearingly romantic plot, so it’s very well-suited to the stage. Round out the evening in the Grand Floridian’s Enchanted Rose lounge, a location that’s actually based on the Walt Disney Studios live-action film that starred Emma Watson.

In Disneyland, French food can be found at the Red Rose Taverne in Fantasyland. The “grey stuff”–a dessert inspired by lyrics from the Beauty and the Beast song “Be Our Guest”, sung by Lumiere–involves white chocolate cookies, cream mousse, red velvet cake, and a raspberry center! Belle herself can be seen at the Royal Theatre, and Belle and Beast are also modeled in LEGO form next to the LEGO Store,

If you’re on a Disney Cruise on the Disney Dream ship, you can enjoy “Beauty and the Beast” on stage while at sea, and it’s actually “the largest and most ambitious production to ever hit the stage on a Disney ship”! This version of the story is closer to the live-action film’s style, and features two original songs.  Disney has gone above and beyond with this production, using over “1,000 costumes, wigs, shoes, and accessories, as well as 14,500 Swarovski crystals, with an immersive set composed of giant LED walls and high-definition video projections of 23 different locations”. There’s even advanced puppetry for the enchanted characters!

Hong Kong Disneyland’s , Castle of Magical Dreams has been celebrated many times this week, since its architecture honors each Disney princess or Disney queen, and Belle’s tower involves her signature blue and gold colors. There’s also references to her French origins and her love of reading! In Disneyland Paris, Belle can take a selfie with Guests at Animagic Theater, and the ride Le Pays des Contes de Fées, features her village.

Shanghai Disneyland is also joining in the fun with an entertaining “Beauty and the Beast” performance in Fantasyland, and by advertising Lumiere’s Kitchen. In this hotel restaurant, Belle and her friends might make an appearance!

As far as merchandise goes, there are many Belle-themed items on offer. Disney encourages visitors to “find adventure in the great wide somewhere” with a Belle Lokai bracelet “that carries elements from the highest and lowest points on Earth”. And on the bookshelves, readers can explore the post-happily-ever-after with Belle in The Queen’s Council: Rebel Rose. This is an exciting series, with lots of historical references (including details about the French revolution) and lots of similarities to the Twisted Tales!

The next episode of Disney’s “Courage and Kindness” Youtube series has also been released, so watch the video avoid to enjoy a discussion with Belle herself! Who will tomorrow’s honorees be? We think it’s going to be a pair, due to this hint that was released: it’ll be “a couple of sisters whom you’ve probably heard of”!