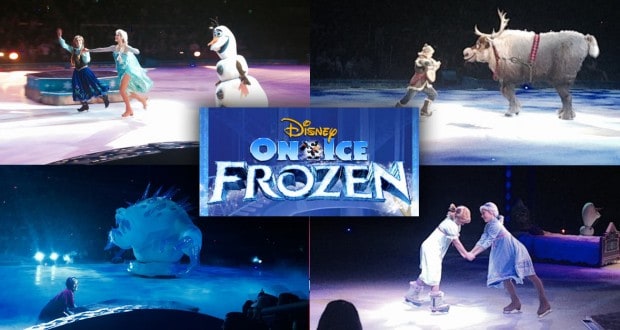 Disney’s Frozen On Ice – 5 Reasons To Enjoy This Frosty Show In Your City! Review

From the moment we walked in the Colosseum in our city and saw the interior transformed into a wonderland of ice, snow, and Norwegian color – I felt as if I had come home – home to Disney’s Arendelle. Just like watching one of Disney’s feature animated films in your living room; visiting this show in a city near you will help you capture some of the Disney magic we all have come to know and love in the smash hit ‘Frozen’.

The show opens with the young men and women skaters in plain clothes circling the ice; engaging the audience in a little interactive dancing – a proverbial pep rally that really gets the kids going! Then, surprise! Our favorite Disney characters including Minnie, Mickey and Goofy came out for a little face-time followed by some of our favorite Disney Princesses. Finally, the real show begins with the town of Arendele coming to life on the ice in front of us!

How do you take a feature film and translate it to this icy medium? Just add a few Disney creative folks, choreographers and costume mavens and you’ve got just the right recipe. But don’t forget the host of 20 year olds that tirelessly put on show after show in cities all over the US, not to mention troops that travel other continents putting on the same production. As a result, Disney’s Frozen is just as magical on the ice as it is in your blue-ray player!

All of our favorite songs from the movie including, ‘Do you wanna build a snowman’ and ‘Let it go’ are all a part of the action as are the pivotal moments of the story. Props move off and on the ice as the story unfolds before us. But, perhaps two of the most impressive characters in the story are Sven and the great snow beast that Elsa conjured up to ward off intruders from her ice castle. Sven, the lovable reindeer trots his enormous form across the ice manned by two skaters complete with a huge rack of antlers and tongue laughably hanging out of his mouth. But even more impressive was the snow beast that rolled out onto the ice curled up in a large ball only to inflate into an enormous and intimidating, white hulk. He them proceeds to chase Anna, Kristoff and Sven around the rink belching great icy blasts of white smoke. Elsa’s ice castle was a little underwhelming, relegated to two sets of stairs leading up to a platform but considering all of these items need to fit in a prop truck, one understands.

4. Entertaining From Beginning To End

In addition to the two characters I mentioned above are the color and flair of the costumes, acting and skating. Kristoff pulls off a back flip as Anna and Elsa glide elegantly across the ice affecting one impressive move after another. The skating was flawless save one fellow tripping and and sprawling on the ice. Regardless, I never once found my mind wandering or becoming bored with the production even though I knew what was going to happen. My daughter and I found ourselves delighted by the ingenuity of the show and how they managed to capture our attention in this retelling of the movie I must have seen at least 2 dozen times at home.

Absolutely! You’ll find Disney’s Frozen on Ice a welcome entertainment that, for the moment, makes you feel as if you’re back inside Disney Parks in an indoor attraction. As usual, there are ample trinkets and doodads aplenty to buy, like a $15 snow cone in a Frozen keepsake cup or a $35 Anna or Elsa plush toy. If you have the deniro to splurge, go for it; but if you want to save a few dollars, steer clear of the Disney product peddlers. There are, of course, folks selling all of these wares inside the arena so beware. We came away from this 2+ hour show delighted and a little lighter in the wallet, but with memories that will last a lifetime. And isn’t that what Disney magic is all about? Creating memories with those we love.

For a list of showtimes near you, visit: www.disneyonice.com