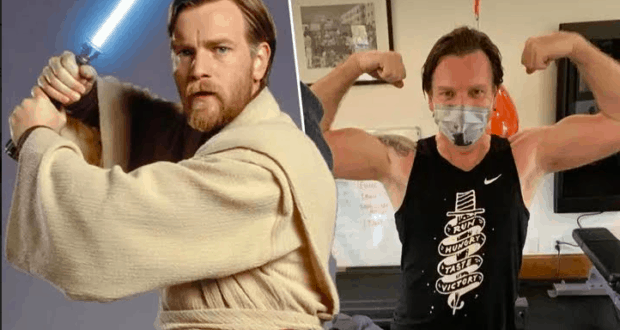 In a recent post by fitness instructor Tony Horton, Evan McGregor is seen flexing with the trainer as he gets ready to roll, and we can see that McGregor is getting into shape so he can defend the galaxy.

There is this expectation, now, for actors to be absolutley, incredibly unbelievably ripped for performances. When you are a Jedi on the run, it’s probably best you’re fighting fit, right McGregor? The Scottish actor, who’s taking on the role of Obi-Wan Kenobi once again at age 49, is now training hard to be the fittest Jedi there is.

The show will follow the events of Kenobi following Revenge of the Sith after many Jedi have been vanquished and Kenobi is still in his younger years. As to who else we’ll be meeting from a galaxy, far, far way, we know, there have been rumors but nothing for certain.

What we do know though is that McGregor will be in peak physical condition to survive the fights he’ll encounter. As Horton states on his Instagram page, “It seems that this Scottish fellow is starting to lean up and slim down. He hasn’t missed a day, and his diet has been spot on. This was day 16.” If this only day 16, we have no idea how buff McGregor is going to look in the actual show when it comes out.

Fans are anticipating both the upcoming Obi-Wan Kenobi and the new Askoha Tano series hoping they’re the same quaility as Mando’s.