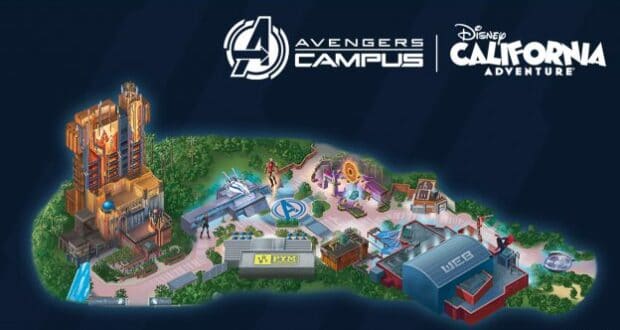 Disney is gearing up for the grand opening of Avengers Campus at Disney California Adventure park at the Disneyland Resort! As Avengers Campus prepares to open June 4, Disney is providing a FIRST LOOK at the guide map for this impressive new land.

As shared by Disney: “As you can see, there are three entrances into the new 6-acre land where you can join the action with the Avengers and their allies, like Iron Man, Black Panther, Black Widow and more; sling webs on the first Disney ride-through attraction to feature Spider-Man; taste-test inventive food and drinks and become part of a bigger universe. Kids and guests of all ages will find their powers as they train alongside some favorite Super Heroes, with a chance to live out their own heroic story.”