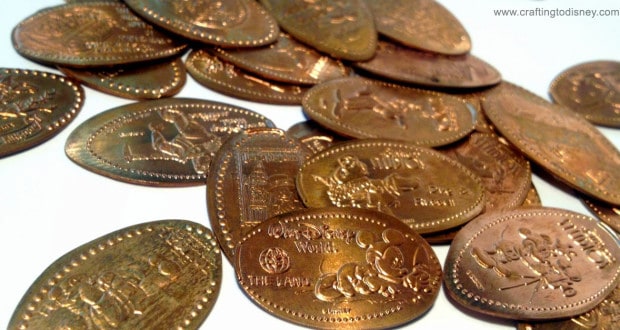 Walt Disney World in Florida is one of the most popular vacation destinations in the world. There are four theme parks, two water parks, 27 themed resort hotels, 9 non-Disney hotels, several golf courses, a camping resort, other entertainment venues, and Disney Springs, a Disney-inspired outdoor shopping, dining, and entertainment complex.  Shopping for Disney souvenirs has endless possibilities, especially since there are literally thousands of Disney-themed gifts and collectibles to choose from.  Let’s look at a very popular Disney souvenir that is readily available at all the theme parks, water parks, Disney resorts, and Disney Springs.  That item would be the pressed penny.  There are penny press machines all over Disney World and collecting all the different images is a fun adventure for the whole family.

1.  A Brief History of the Pressed Penny

The first elongated coins in the United States were created at the World’s Columbian Exposition (Chicago World’s Fair) held in Chicago, Illinois in 1893.  One of the technologies on display at the Fair was a press machine.  This particular press machine was modified by a jeweler to include an engraving on the press, and in order to show off the immense strength of the machine he would use it to flatten a coin.  For the cost of 5 cents along with the coin to be flattened and thousands of pounds of pressure, guests were not only able to see the machine at work but at the end of the display they would have a flattened coin as a memento.  The earliest elongated coin designer on record is Charles Damm, who created the design for the elongated coins available at the 1901 Pan-American Exposition in Buffalo, New York.  The pressed penny became extremely popular and in 1965 private individuals began to design and create their own pressing machines. Then, in 1971, the first coin-operated penny press was invented and became very popular, rising to an all time boom in the 1980’s and that’s when Disney got involved.  The first penny press machine was introduced at Disneyland, California in June, 1987, followed by their introduction to Walt Disney World in 1994.  The pressed penny has been around for over 100 years and is still a very popular collectible Disney souvenir.

2.  How Many Pressed Penny Machines Can Be Found at Walt Disney World

Today there are approximately 204 penny press machines at Disney World theme parks, water parks, resort hotels, and Disney Springs.  The number of pressed coins that can be made into elongated coins is a whopping 770.  This includes pressed dime and quarter machines.  In order to collect every coin, it would cost approximately $462.14, and the time it would take to visit every pressed penny, dime, or quarter machine would be extreme.

This endeavor might even make it into the “Guinness Book of World Records”.

3.  How Do Pressed Coin Machines Work?

Today most of the pressed penny machines operate by inserting two quarters and a penny into the machine.  Then watch as the coin drops between two mechanical presses as you turn the crank, and before your eyes that penny is transformed into an elongated penny imprinted with a unique Disney image.  *Dime and quarter pressed coin machines require 4 quarters and a quarter or dime*

It’s best to use bright, shiny, new pennies for the penny press machines.  The imprint and engraving come out much better than older pennies.  The same goes for dimes and quarters.  A good way to carry your coins is in a tube of Mini M&M’s, after you’ve enjoyed the contents, of course.  Those small candy tubes are perfect containers for pressed penny change.

5.  Where Are Pressed Penny Machines Located?

Pressed penny machines are located in all four Disney theme parks, two water parks, Disney hotel resorts, and Disney Springs.  You can find WDW pressed coin checklist pocket guides online which will give you all the locations and whether they are penny, dime, or quarter machines.

6.  What To Do With Those Elongated Disney Coins

Here are a few ideas of what to do with all those Disney coins.  Frame them. There are so many different ways to arrange your pennies in a frame.  Try making a Mickey head out of them.  You can purchase a metal punch machine at most craft stores, and then transform your Disney collectible coins into a unique jewelry item, like a necklace, bracelet, key chain decoration, or  earrings. There is also the option of purchasing a Disney Pressed Coin Collection Holder, available at most shops in Disney World.  They’re inexpensive and an excellent way to preserve your coins and show them off to friends and family.

Recently Disney World has added new digital Penny Press machines which will now take credit cards, Apply Pay, or Google Wallet.  The biggest difference between the new machines and the older models is that these new machines are totally digital. You don’t even insert a coin, and there’s no crank mechanism.  The cost is $1 per penny or you can purchase a 12 design collection for $10 or a 4 design collection for $4, using credit, debit, Apple Pay, or Google Wallet.  With the simple push of a button you are now the owner of a great Disney pressed coin collection.

In addition to being a fun and adventurous activity, collecting pressed coins at Walt Disney World is also a good way to keep young children occupied while waiting for that all important fast pass+ attraction or dinner reservation.  Young children are amazed when they drop that penny, dime, or quarter into a machine, crank the handle and watch as it changes into a collectible Disney souvenir.  If you purchase one of the themed coin collection holders, your children will enjoy placing their new elongated coins into designated slots, then watch their collection grow as they add each new coin.  The smiles on their faces are priceless when that pressed coin drops into the till and they realize they just made their own souvenir.  It’s fun for older children and adults also.  I, myself, have my own collection, and I can’t wait to start collecting all the pressed coins from “Star Wars Galaxy’s Edge”.