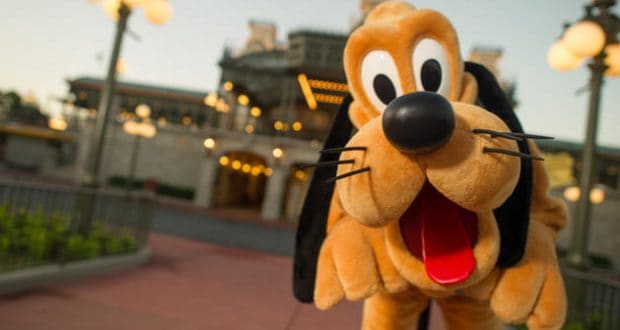 We’ve all heard it said that “a dog is man’s best friend,” and the same rings true for Disney’s beloved main mouse. When we were first introduced to Mickey in 1928, he was a solo performer. But two years later, we met his beloved dog, Pluto, in a Disney short titled The Chain Gang in August of 1930. But there’s so much more to this beloved pup than you might realize. Take a look!

8. He’s unlike the Fab Five in one obvious way.

Pluto likes to hang with Mickey, and he enjoys the rest of the Fab Five gang as well: Minnie, Donald, Goofy and Daisy. But unlike the members of the Fab Five, Pluto was not created to be an anthropomorphic character, meaning he doesn’t have human characteristics, such as the ability to talk, etc., like his five friends do.

7. He was nameless at first.

When Mickey’s best friend made his debut in 1930, it was in an 8-minute short titled The Chain Gang, but he was unnamed. He was one half of a bloodhound duo that was hot on the trail of Mickey Mouse when he escaped from prison.

In October of 1930, Disney Studios released its twenty-third Mickey Mouse short called The Picnic. In the short, Mickey and Minnie are going to enjoy a picnic, and Minnie asks her beau if she can bring her dog. Mickey has no problem with this. Then he realizes that the dog is a huge bloodhound that Minnie affectionately calls “Rover,” whom we see again in the April 1931 cartoon, The Moose Hunt. In the 1931 cartoon, Mickey’s beloved dog was finally referred to as “Pluto.”

In the 23rd Mickey Mouse cartoon released by Disney Studios, Pluto (then called Rover) is Minnie’s dog, but we know him now as Mickey Mouse’s dog. The question is, why the switch, and how did it come about? (I guess that’s two questions, both of which we’ll file under “Things we wish we could have asked Walt.”

According to the official D23 Fan Club site, D23.com, Walt relied on inspiration from canine pals he met when he lived with his parents as a boy in on a small farm in the sleepy little town of Marceline, Missouri.

3. Once upon a time, Pluto had a wife and family.

The very first Disney cartoon to star Pluto the pooch was Pluto’s Quin-Puplets in 1937. The cartoon was a nod to the Dionne quintuplets born in Ontario, Canada, in 1934. The Dionne quints gained quite the notoriety because they were the first set of quintuplets who were known to have all lived through their infancies. In the Pluto cartoon, Pluto and Fifi the Peke were known as “Mr. and Mrs. Pluto,” and they are the parents of five little pups who love to get into trouble. Later, in 1942, Pluto, Junior was released, in which Pluto stars as papa to a puppy.

2. His Disney career is pretty impressive.

Maybe it’s because he had so many mouths to feed at home. Maybe it was for the love of the job. We’re not sure, but Pluto has worked hard his whole life, and his career on the big screen (and small screen) has been extensive! He has starred in 48 official cartoons that are his very own, and he also plays a supporting role in many of the beloved Mickey Mouse cartoons. Pluto has even joined forces with Donald Duck over the years to film such cartoons as Donald and Pluto (1936) and Donald’s Dog Laundry (1940). He is also the only member of the “Sensational Six” who was offered his very own Silly Symphony cartoon in 1936.

Mickey Mouse isn’t the only member of the Disney empire to have the Academy Awards as part of his achievements and accolades. On June 28, 1940, Disney released Bone Trouble, a cartoon starring the playful pooch Pluto. In this cartoon, Pluto is hungry, but he doesn’t know what’s waiting for him when he attempts to steal a bone from another canine. The cartoon won an Academy Award for Disney for Best Cartoon!