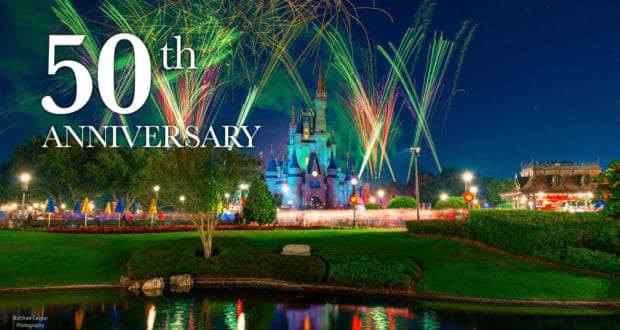 Disney World’s 50th anniversary celebrations are set to take place next year, and knowing the resort this will be an all-year-round event. But the big question currently facing 2021 is how the current viral crisis is affecting the preparations. The details might be unknown, but it’s fair to say that production and development – at least on the ground – has been temporarily stalled.

The chances are that some aspects of 2021 will be delayed, or perhaps even cancelled altogether. After all, there’s no telling how the next few weeks or months will unfold, or when the resort might reopen. And while it will most likely reopen this year, it’s also possible the doors could stay closed until 2021. For now, let’s remind ourselves what’s on the horizon, and how they might be affected by the current crisis.

Attractions set to open next year include Tron: Lightcycle Run, Guardians of the Galaxy: Cosmic Rewind and an untitled Mary Poppins-themed attraction. Exact dates hadn’t been announced, so it’s difficult to even hazard a guess as to whether these will be affected by the crisis. One would hope that we’ll see the unveiling of these attractions regardless, even if it’s at the latter end of 2021. On a positive note, these attractions sound practically perfect in every way, and give us something to look forward to.

6. New Measures All Round

Whether it’s this summer or this Christmas, when Disney World eventually reopens, it will hardly be picking up where it left off. But, of course, this will be for everyone’s own good. New safety measures will very likely include heat sensors at park and resort hotel entrances, continued social distancing, restricted capacity and an overall ‘phased’ reopening. And as it makes sense for all these implementations to continue into 2021, it means the epic celebrations won’t be quite as hustling and bustling as they were previously expected to be.

Star Wars: Galactic Starcruiser is also set to land in 2021 and dock nearby Disney’s Hollywood Studios. This two-night experience is, for all intents and purposes, a Disney Resort Hotel, and how things will change for all Disney accommodations is one of the biggest questions facing the resort. The resort hotels were set to sell out fast ahead of next year, but this may change when you consider all the new measures that will be introduced.

While safety measures will be implemented throughout the entire resort, there’s one place where they could be most effective – one of Disney World’s popular mobile apps, namely My Disney Experience. The app already features several useful functions, from a GPS-enabled interactive map to restaurant bookings and FastPass+ reservations. Introducing some sort of awareness feature, or guidelines or tips in any shape or form on how best to avoid spreading or catching infections, will be enormously invaluable, especially in 2021.

2021 is set to unleash some truly epic night-time celebrations and parades – it wouldn’t be a Disney World anniversary without them. And it’s fair to say such events will still take place, but as the world will be in the midst of getting back to normal and therefore understandably vigilant and fearful of a second wave of the viral crisis, you can probably expect these otherwise hugely-concentrated gatherings to be mitigated in some way, whether it’s through policed social distancing or capacity limitations, or both.

If these were ordinary times, 2021 would have easily been the busiest on record for Disney World. A 50th birthday is a huge milestone, and some of the new offerings from new attractions to new night-time experiences would have brought in scores and scores of guests. This could still be the case, but it’s looking unlikely. Even if Disney World opens its doors to all, with no capacity limitations, there still may very well be a significant natural drop in guest attendance, due to the general fear of catching the virus or a second wave of the viral crisis.

There are many reasons as to why the 50th anniversary celebrations could be reduced in size or shortened in length – or both. The first being that it would naturally lessen the chance of spreading infection. After all, the virus isn’t something that’s going away anytime soon. With that said, the world will have to return to some form of normality sooner or later. And secondly, and though we hope it’s not the case, Disney World may not open for a while yet, meaning the beginning of the celebrations could be pushed further out.

There are so many unanswered questions about 2021, but let’s focus on getting through the rest of 2020 together first. These are pressing times, but there’s still plenty to look forward to where Disney World is concerned. The resort may wind up seeming very different upon reopening to what we’ve grown accustomed to, but as it’s all for our own safety, it can only be a good thing. It will save lives and allow guests to enjoy the magic more comfortably. In the meantime, stay home, stay safe and keep the magic going.

Covid Disney 2020-05-01
Daniel
Previous: Our Top Ten Favorite Resort Experiences for First-Time Guests to Disney World
Next: How Disney World May Be Different After Quarantine