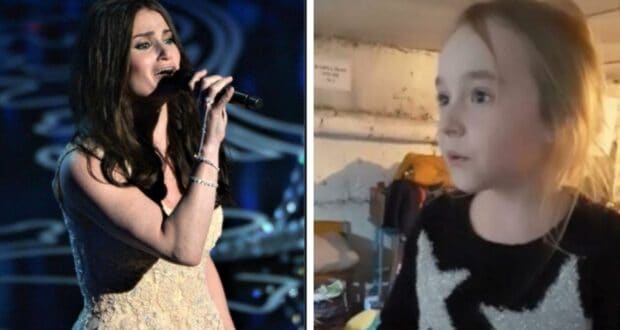 The past two weeks have been dark as the world watches Russia’s attack on Ukraine, but organizations, celebrities, and people worldwide have been offering aid to Ukrainians however they can. Ukrainians themselves have exhibited remarkable strength in the face of the Russian invasion, and when footage of a Ukrainian girl singing the famous Frozen hit song “Let It Go” from within a bomb shelter was released, Frozen star Idina Menzel (who sang the original Disney princess song) was quick to respond!

Idina Menzel, the Tony Award-winning singer and actress who is known by Disney fans for playing Elsa in the Frozen films (and for singing the original iconic version of the hit song “Let It Go”), shared the video of the Ukrainian girl (whose name is Amelia) singing “Let It Go” in Ukrainian in a makeshift bunker with the following caption: “We see you. We really, really see you.” The singer Idina Menzel also shared blue heart and yellow heart emojis, presumably representing the Ukrainian flag.

Since social media allows Ukrainians to share content like this from a bomb shelter within Ukraine, many people all over the world have been seeing their plight in action and sending both love and concrete support (as well as deliberately refusing to engage with Russia or Russian products). Apparently, the entire bunker was also moved to silence, and tears, by the child Amelia’s heartfelt performance. Many celebrities who have the additional income and resources to send significant support have been doing so (for example, Ashton Kutcher and his wife, Ukrainian actress Mila Kunis, have raised over $17 million so far on GoFundMe in support of Ukrainians with a $30 million goal) but an inspiring song from a Disney film and its performance by a girl in a war-torn country also both serve as a reminder that we can all do our part.

As Mila Kunis put it, “Ukrainians are proud and brave people who deserve our help in their time of need. This unjust attack on Ukraine and humanity at large is devastating and the Ukrainian people need our support”.

Amelia’s song from within a makeshift bunker and Idina’s support also serve as reminders that Disney magic, the magic of music, and the magic of connections between people are all true sources of hope and light in dark times. The woman who posted the Facebook video of Amelia’s singing from the bomb shelter, Marta Smekhova, said it best: “our children radiate light, and even in the damp dark basement it does not fade, but ignites even brighter! and the whole world applauds our children”!