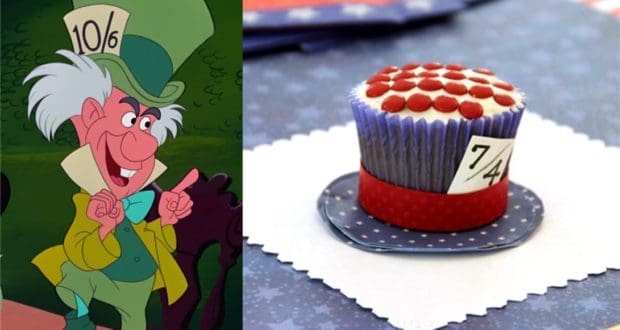 Designing a patriotic top hat that outdoes Uncle Sam’s is one tall order, unless perhaps making hats happens to be your specialty. This sweet Fourth of July topper, courtesy of the Mad Hatter (and Family.Disney.com), features red candy stripes and a price that’s right. The original 10/6 (shillings/pence) tag has been marked down to 7/4 in honor of the holiday. Happy 4th of July Disney fans!

1. Cut off the tops of the cupcakes level with the upper edge of the paper cupcake liners so that they better resemble the flat top of the Mad Hatter’s hat

2. Frost the trimmed cupcakes and press red candies in place to create stripes.

3. Print the template and use it as a pattern for cutting out a set of brim and hatband pieces for each cupcake from the specified colors of paper. Glue the top brim circle atop the bottom brim circle and then curl the outer edge of the paper slightly with your fingers to give the brim a little more dimension.

4. Now shape the red hatband piece into a ring and secure it with a glue dot. Ideally, the ring should be just wide enough for the bottom of the cupcake to fit into without actually allowing it to rest on the tabletop. This will create the illusion that the hat is taller than it actually is.

5. When you know the ring is the right size, remove it from the cupcake and stick it to the brim using a couple of glue dots.

6. Set the cupcake in place.

7. For the finishing touch, use number stickers or a marker and a small square of white paper to make a 7/4 date tag — tuck the bottom of the tag behind the hatband.