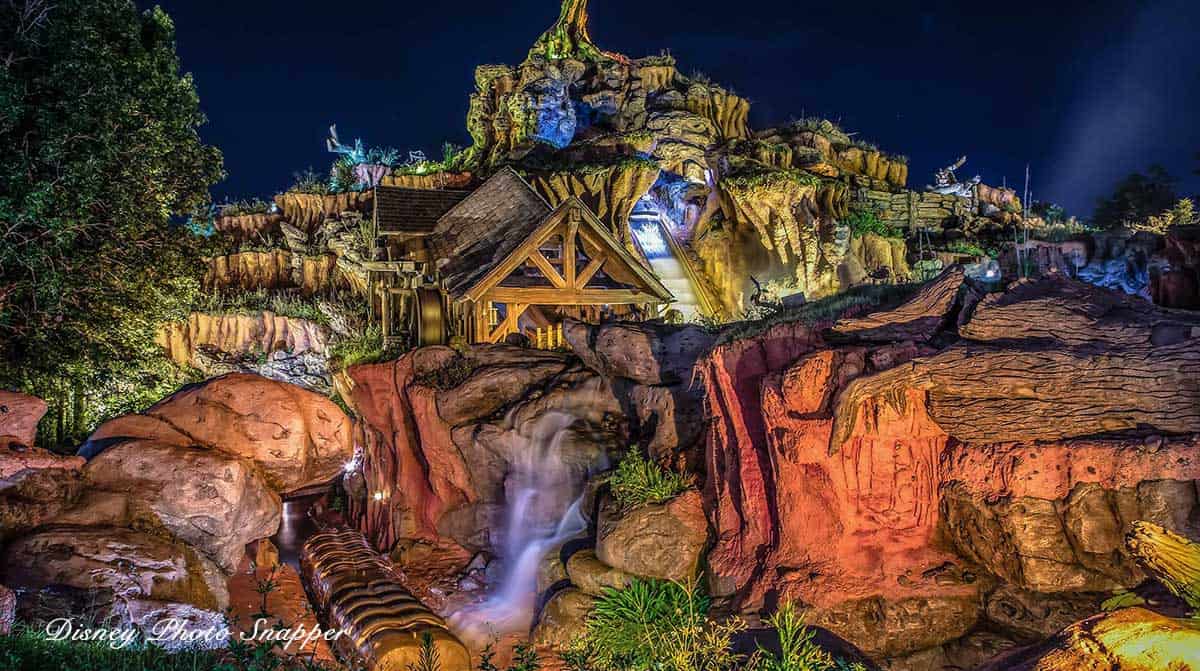 From Liberty Square you can enter the world of the Wild West where banjo music and smoked turkey legs abound.  Everywhere you look the old west is represented in the shops, eateries, and wooden walkways.  The rides and attractions are reminders of a time gone by when cowboys, wagons, log flumes, and gold mines were “signs of the times”.  There are two major attractions in Frontierland, “Splash Mountain”, a log flume ride which takes you inside a mountain and into the comical, musical world of Disney’s classic film, “Song of the South”.  It’s a fun-filled, splashy ride where you will meet all kinds of critters, including Br’er Fox, Br’er Bear, and Br’er Rabbit as they carry out their antics for all to see.  Watch out for that big splash at the end of the ride.

The other attraction, “Big Thunder Mountain Railroad”, is a speeding roller coaster ride on a runaway mine train, with sharp turns and sudden dips as your train darts in an out of an old abandoned mine, which is exploding just as you exit the mine.  Hang on tight because you are on the “wildest ride in the wilderness”!

Tom Sawyer’s Island is an outdoor adventure for the whole family.  Get on board a motorized wooden raft for a trip to an island where Mark Twain’s novels about Tom Sawyer and Huckleberry Finn come to life.  Set in the 1840’s, the stories are about these two boys and their shenanigans  and how they spent their days romping, running, climbing, and exploring caves, totally enjoying their carefree lives.  You can experience those same adventures on this island recreated by Disney imagineers to remind guests of those carefree days.  There are caves to explore, barrel bridges to navigate, an old Western fort to visit, and plenty of other experiences for the youth in all of us.  Enjoy the island with your family and be sure to check out the view of the Haunted Mansion from a deck near the water’s edge complete with two old-fashioned rocking chairs.

Just around the corner from Frontierland is the amazing and wondrous world of Swashbuckling Pirates, African jungles, Arabian Kingdoms, delightfully entertaining tropical birds, and a one-of-a-kind family treehouse.  On the attraction, “Pirates of the Caribbean”, guests travel on a small boat into the world of pirates pillaging a small village, where you can catch a glimpse of the infamous pirate, Captain Jack Sparrow.  On the “Jungle Cruise” guests board an old-fashioned tramp steamer and travel down the Nile, Amazon, and Mekong Rivers for an exciting tour of lavish jungles, waterfalls, curious gorillas, bathing elephants, and a group of hungry hippos. “Magic Carpets of Aladdin” gives guests a chance to fly on a magic carpet for a circular view of an Arabian marketplace.  The “Tiki, Tiki, Tiki Room” is an indoor theater where audio-animatronic tropical birds create beautiful music and Tiki statues create the sounds of thundering drumbeats.  Before you leave Adventureland be sure to explore the “Swiss Family Robinson Treehouse”, an exact replica from the Disney feature film, “Swiss Family Robinson”.  Also, be sure to try the famous island favorite, a refreshing Dole Whip frozen treat.  It will bring pure joy to your taste buds.

Well, there you have it, a synopsis and overview of the “Magic Kingdom” at Walt Disney World.  In addition to all the rides and attractions, there are so many themed restaurants, counter service venues, and snack carts to choose from, a multitude of shops, fabulous stage shows, parades, and fireworks displays to enjoy.  Without a doubt, the Magic Kingdom remains the most popular theme park in all of Walt Disney World.  Discover for yourselves why it holds that great honor.

Left 3 of 3 right
Next: 10 Of The Best Places For Lunch At Disney's Magic Kingdom