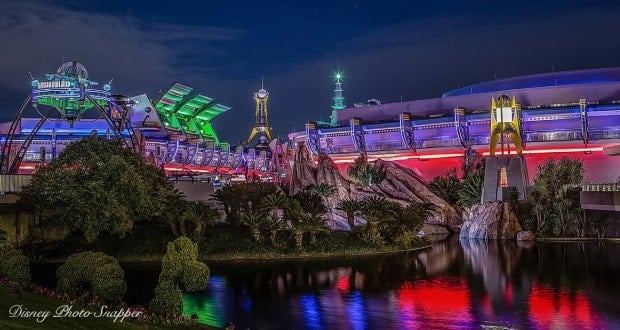 8 ‘Must Do’ Rides And Attractions In Tomorrowland – Magic Kingdom 101, Part 1

The Magic Kingdom in Walt Disney World is an amusement park like no other, with all kinds of exciting and magical rides and attractions. Spend an entire day at the Magic Kingdom, and you will have journeyed through the past and into the future, either by train, trolley car, miniature race car, spaceship, peoplemover, boat, mine train, or possibly a flying carpet, log raft, floating ship, flying elephant, goofy airplane, a giant clamshell, doom buggy, or a floating log. Each ride or attraction has a story to tell and will send you on an adventure you will never forget.

Walt Disney had these words to say about his beloved Disneyland: “Disneyland will never be completed. It will continue to grow as long as there is imagination left in the world”. I am sure he would feel the same way about Walt Disney World, which, like Disneyland, is constantly changing and evolving. WDW is, after all, the “most magical place on earth!”

“To Infinity and Beyond!”—These famous words spoken by Buzz Lightyear welcome you to his special
Space Ranger training course. Here each Space Ranger candidate climbs aboard an XP-38 Space Cruiser, which holds two pilots and is equipped with a central joy stick for spinning. On the front of the cruiser are two laser cannons which will be used to aim and shoot at hundreds of targets as they turn, spin, and pop up as your vehicle spins around. The colors and shapes of the targets are varied and each target is worth a different amount of points, which are totaled and digitally displayed, showing your Space Ranger ranking and level achieved. FastPass+ is available for this ride. There is no height requirement.

This attraction is a “theater-in-the-round” presentation featuring Stitch, the quirky little alien from Disney’s “Lilo & Stitch”. There are two preshows while guests wait to enter the main theater. Before Stitch met Lilo, he was a mischievous little troublemaker always causing problems, and is eventually caught by the Galactic Federation. In the preshows the audience members are recruited as security personnel and given instructions on how to assist with the incoming teleportation of a dangerous High Security level-3 prisoner.

When Experiment 626 (Stitch) arrives, the audience is taken into the main theater, where they are seated and confined to their seats by shoulder restraints (scanning devices for DNA). During the approximately 10-minute show, Stitch escapes into the theater, and all havoc erupts, and every audience member will actually feel Stitch’s antics as he jumps on shoulders, tickles heads, runs all around the theater while dodging the laser cannons firing at him to prevent his escape from the building. It’s a fun, laughable experience for all, and we all know what happens to Stitch, hence the title of the ride. FastPass+ is available for this attraction but you may not need it due to low crowd volume.

The Laugh Floor is another indoor theater attraction featuring Mike Wazowski and Roz from the original Disney movie, “Mosters, Inc.” The premise of the monster-comedy club is to present a variety of monster comedians in a special performance before an audience of humans, thus collecting a multitude of laughs in order to generate electricity for Monstropolis. There is a short pre-show that runs while guests are waiting to enter the theater. During the wait you can text your favorite joke to a special number, and it may be used in the performance.

After you have been seated in the theater, Mike Wazowski as the Monster of Ceremonies and Roz, greet their audience with some not-so-funny jokes and comments. Then he introduces the monster comedians who will be entertaining the special human guests. Through the magic of Disney Imagineers and movable cameras placed in all the right places, Disney “performers” backstage can scan the audience and pick someone to interact with. A Disney Cast Member brings a microphone to the selected guest so they can respond to the outlandish questions or comments by the monster comedian. Cameras mounted on the ceiling spotlight certain members of the audience on big screens at the front of the theater, displaying silly captions underneath. You can be sitting there enjoying the show, laughing, when suddenly, there you are on the big screens when you realize everyone is laughing at you. It’s a real hoot! This attraction is a great way to have a seat, enjoy a laugh or two, and enjoy some great comedy! FastPass+ is available for this attraction but not necessary.

This iconic attraction which joined Walt Disney World in 1975 is actually a rotating carousel theater which carries guests into the home of four generations of the same audio-animatronic family from the early 1900’s to the present day. Each scene depicts the newest innovative advances in recent technology. Dad, who narrates each scene gives a detailed description of each new modern marvel. As he describes each item, it is spotlighted and comes to life to demonstrate how it works. At the end of each scene, the entire theater rotates and stops at the next decade. From pre-electricity to computers, Dad and his family show how technology is always improving our lives, and the future is always just a dream away.

This is not a thrill ride, but is arguably one of the most memorable attractions at Walt Disney World. It’s one of those special rides the whole family can enjoy together. By the time the ride is over, everyone, including Dad, his entire family, and the family dog, Rover, are singing the same tune, “Oh, there’s a great big beautiful tomorrow………” We all know how the song goes! No FastPass+ is available for this ride.

On this ride, you can pilot your own spacecraft. To access the Astro Oriber, you ride an elevator up to the loading area where you will board one of several silver rocket ships, which can hold two riders, one behind the other. Once on board you can use your joystick to raise and lower your rocket as it goes round and round and up and down, at a pretty fast pace. You actually go faster as you lower your rocket. Try raising it all the way up, then slowly lower it. You’ll feel the pull of gravity. Also, you might want to experience this ride at night. It affords a breathtaking view of Tomorrowland in its’ twinkling nighttime glory! FastPass+ is not available for this ride. There is no height requirement.

This is a mountain allright – a mountain of thrills and chills! This indoor roller coaster boasts plenty of twists, sharp turns, and dynamic dips in the dark. The lines for this ride are always long, but most of the queque is indoors. This dimly lit queque seems endless, but along the way there are interactive training stations, much like a video game, which can be accessed in several different spots along the way.

By the time you reach the loading zone, you can hear the shrieks and screams coming space travelers enjoying their flight. Once you get to the loading platform, you will board your six-passenger rocket and enjoy a wild ride into space! FastPass+ is available for this ride. There is a 44-inch height requirement.

As the name implies, this ride is constantly moving. You access it by stepping onto a moving conveyor belt which takes you up to the loading area where you step into your ride vehicle which is moving at the same speed. These vehicles seat four, two facing forward and two facing backward. The PeopleMover is a relaxing way to take a narrated tour of Tomorrowland. Your vehicle will take you in and out of shops and attractions, all affording a bird’s eye view of the action. It’s especially fascinating when you travel through Space Mountain and Buzz Lightyear’s Space Ranger Spin. On a really busy, crowded day at the Magic Kingdom, the PeopleMover is an ideal ride to kick back and enjoya relaxing 10 minutes. We recommend trying it at night, when you’ll get an awesome view of the dazzling light displays of Tomorrowland. No FastPass+ is needed for this ride, and there is no ride requirement.

This popular ride is one of the Disney’s original attractions. Guests, young and old, become race car drivers in one of these miniature gas-powered Indianapolis 500-style race cars. Just climb in, put the pedal to the metal, and you’re on your way. The cars are on a rail, but they do tend to go back and forth a lot, depending on the driver. Each car seats two, usually two children, or one adult and one child. Along this 2000-foot track, there are banks and turns and other motorists, so slow down if you get close to the car in front of you. Safe driving is a must on this ride. There is an observation bridge where spectators can watch the action. FastPass+ is available for this ride. You must be 54” to drive alone and 32” to ride as a passenger.

– 7 ‘Must Do’ Rides And Attractions in Frontierland and Liberty Square, Magic Kingdom 101, Part 3