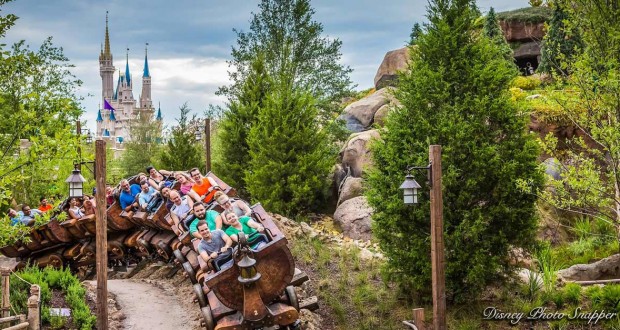 10 ‘Must Do’ Rides and Attractions in Fantasyland – Magic Kingdom 101, Part 2

Join Alice and the Mad Hatter from Disney’s “Alice in Wonderland” feature film, and take a spin on a giant tea cup. It’s just like the “Unbirthday” celebration with Alice, the Mat Hatter, and the white rabbit, except you are now in the tea cup rather than drinking out of a teacup. The entire ride spins, and each teacup (which can hold two or three riders) can spin individually by grabbing the wheel in the middle of each teacup and spin, spin, spin as hard as you can. The harder you pull on the wheel, the faster you spin! If you suffer from any degree of motion sickness, this ride is not for you. FastPass+ is not available for this ride. There is no height requirement.

9. Barnstormer With the Great Goofini

This is the one roller coaster in Walt Disney World designed specifically for children, but parents will also enjoy riding along. Located in the Storybook Circus area of Fantasyland, this ride is very popular with the younger guests, and therefore, the lines are usually long. You ‘ll board an airplane, then enjoy a swooping, twisting and turning flight, ending with a blast through a billboard coming out on the other side. All this action takes place in less than two minutes. The ride vehicles are small and are not designed to hold very large adults. Sometimes, Mom or Dad will have to ride in a plane by themselves. FastPass+ is available for this ride. There is a height requirement of 35” to ride.

Based on the Disney animated feature film, “Dumbo”, this classic ride has moved to the Storybook Circus area of Fantasyland, and a second carousel of flying Dumbos has been added to this very popular ride. There is an interactive play area with slides, climbing nets and other fun activities for the smaller guests, including a special area for toddlers. There are even bleachers for parents to sit down while they watch their children play. Each party is given a pager when they enter the tent which goes off when its time to ride. How’s that for ingenuity! Hats off to the imagineers! FastPass+ is available for this ride. There is no height requirement.

7. The Many Adventures of Winnie the Pooh

Take a charming journey in a four-seater hunny pot and join Pooh Bear and his friends on a short adventure in search of the elusive pot of honey, Pooh’s favorite food. Along the way you will experience a blustery day, bouncing with Tigger, swirling with honey-stealing Huffalumps and Woozles, and after a thunderstorm, float on water to rescue Piglet from the Floody Place Falls. This ride is short, but sweet, and the whole family will be delighted by all the fun and enjoyment of riding a hunny pot through the Hundred Acre Woods. FastPass+ is available for this ride. There is no height requirement.

6. The Seven Dwarfs Mine Train

Disney’s animated classic film is the inspiration for this newest addition to New Fantasyland. There is an awesome interactive queque that will keep youngsters busy as they move along the line. Step into a realistic replica of the mine cars from the movie, and get ready for a rollicking, speedy adventure through the Seven Dwarfs Mine. The ride features a new first-of-its-kind ride system in which each individual car swings from side to side at each turn, twist and drop. This unique design guarantees a different experience each time it’s ridden. From the mountains, through the Dwarfs’ diamond mine, and past the Dwarfs’ cottage where Snow White is laughing and dancing with her new-found friends, your exciting journey will be over too soon! FastPass+ is available for this ride. There is a height requirement of 38”.

“It’s A Small World” had its’ debut at the 1964-65 World’s Fair in New York. After the Fair the attraction was moved to Disneyland in California and immediately became one of the most popular rides at the Park. Because of its immense popularity, another version of “It’s A Small World” became a part of Walt Disney World when it opened in October, 1971. On this ride, you board a boat and enter a world of children from many nations nation on the planet Earth. As your boat slowly glides on international waters, hundreds of audioanimatronic children representing their countries are seen in their native costumes while dancing and singing that tune we all remember—“It’s A World of Laughter, A World of Tears…..It’s A Small World After All”. In addition to the authenticity of the children’s costumes and cultural dance styles, each country has been elaborately designed and decorated to clearly show off its’ finest contributions to the world. There is so much happening on either side of the boat that it takes at least two trips to take it all in. This is one of those Disney favorites that you don’t want to miss! FastPass+ is available for this ride.

Peter Pan’s Flight is another original ride that has been at Walt Disney World since its ‘opening in October, 1971. With a sprinkling of pixie dust by Tinker Bell and Peter Pan’s announcement, “Come on everybody, here we gooooooo!”, your pirate ship begins its nighttime flight over London. Each ride vehicle can hold two adults and one small child and because your “flying ship” is suspended by a rail on the ceiling, you get the overwhelming sensation of flight. Even though this is a dark ride, Disney imagineers used black lights and special fiber optics to bring the city of London to life. From your ship, you can look down on the city, and see the twinkling lights of cars, buses, Buckingham Palace, and even Big Ben, which are getting smaller and smaller as your vehicle moves higher and higher into the clouds. Your destination is Neverland, home of the lost boys, Captain Hook, Mr. Smee, a tribe of Indians, and a tick-tocking crocodile. You will relive several scenes from the movie, including the swashbuckling sword fight between Peter Pan and Captain Hook. Of course, we all know who wins! FastPass+ is available for this ride. There is no height requirement.

In 1967 Disney imagineers discovered this historic carousel, which was built in 1917, at Olympic Park, in New Jersey. Disney purchased it, and after major renovations, it became a part of Walt Disney World, and welcomed its first riders at WDW’s opening day. This carousel was originally called Cinderella’s Golden Carousel, then in 2010 the name was changed to Prince Charming Regal Carousel. Officially classified as the oldest ride at Walt Disney World, it is truly magnificent with its 90 beautifully decorated horses, moving up and down to the tune of an old-fashioned organ playing classic Disney melodies. I can remember climbing up on one of those beautiful horses, then pretending I was Cinderella galloping around my Kingdom. I still ride it today. Why not? Fantasyland and the Magic Kingdom have no age limit on fun and “magic”! FastPass+ is not available for this ride. There is no height requirement.

This elegantly designed indoor theater attraction brings to life, in 3-D format, a whimsical concert presentation starring some of Disney’s most famous characters, including Mickey, Minnie, Donald, Goofy, Ariel, Aladdin, Peter Pan, Simba, and many more. The show revolves around Donald, and as usual, he gets himself into a bizarre and mind-boggling situation. His troubles begin when he puts on Mickey’s Sorcerer’s Hat after being warned by Mickey not to do so. The remainder of the show follows Donald as he tries to retrieve his hat during a magical vortex that carries him in and out of different scenes from famous Disney films. In each clip, he is trying to get Mickey’s hat back while interacting with characters from “Beauty and the Beast”, “Aladdin”, “Peter Pan”, and many more. Donald’s hysterical attempts to grab the Sorcerer’s Hat keeps the audience laughing out loud! There are also extraordinary special effects—the smell of a freshly baked apple pie, a blast of wind when champagne bottles pop their corks, etc. Sit back and enjoy this magical trip into a world of musical numbers and 3D animation like you’ve never seen before. FastPass+ is available for this attraction.

Millions of people have enjoyed the classic Disney feature film, “Beauty and the Beast”. This attraction is an interactive meet-and-greet located in the Enchanted Forest, as part of the New Fantasyland. Follow the cobblestone walkway to Maurice’s Cottage, overshadowed by the daunting image of Beast’s Castle. The inside of the cottage looks like a scene right out of the movie. The main room is filled with stacks of books, hand crafted furniture, and even a portrait of young Belle with her mother. Maurice’s workshop is filled with his tools and inventions, and in the center of the room is a Magic Mirror, given to him by Beast so he could visit Belle whenever he wished. The guests soon find out that the Magic Mirror is also a portal which transports them to the library in Beast’s Castle. It is here they meet Madame Wardrobe who asks for volunteers to help surprise Belle with an re-enactment of the day she and Beast fell in love. With the help of a Disney cast member, the “performers” are assigned their parts and given a wardrobe and a variety of props. When Belle arrives, she is surprised and thrilled to see so many visitors, and even more delighted by the outstanding performance, which concludes with everyone singing and dancing to the popular musical tune, “Be Our Guest”. Belle then greets all the performers individually whilst cameras snap commemorateing the moment, and then presents each one with a special Bookmark. This is an absolutely charming and unique meet-and-greet. FastPass+ in available for this attraction.

This great hall offers guests two meet-and-greet choices, either tCinderella with another visiting Princess, or the famous royal sisters from Arendelle – Anna & Elsa. The gorgeous Royal Hall is decorated with sparkling chandeliers, colorful banners, and beautiful stained glass windows depicting scenes and characters from famous Disney Princess films. Also for your viewing pleasure is Cinderella’s glass slipper which is illuminated in a special case. **Due to the popularity of Anna & Elsa, Disney is trying a new approach of cutting off the line when it reaches a certain point, then handing out tickets with a specific return time on them.** Fast Pass+ is recommended for this attraction.

– 7 ‘Must Do’ Rides And Attractions in Frontierland and Liberty Square, Magic Kingdom 101, Part 3