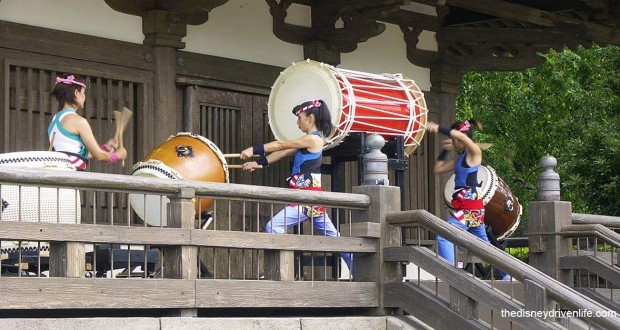 If you love visiting EPCOT’s World Showcase and seeing what each country has to offer in the way of street entertainment, then you’ll love hearing this news! The acclaimed Matsuriza Taiko Drummers are coming back this Friday, returning with their signature (which is what’s described on Disney World’s website as the “thundering sound of Taiko, an ancient form of Japanese drumming”). This group has been a crowd favorite ever since it started performing, and many people were thrilled to learn that it’s coming back–especially since the group originally thought that the pandemic had ended their time at Disney World! 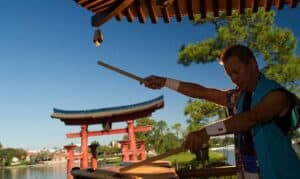 The drumming group will officially resume performances on October 1st, making their return just one more thing to put on your list and check out during Walt Disney World’s 50th anniversary celebration. The shows typically last fifteen minutes, but they make quite an impact during that time! So far it looks like the Matsuriza Taiko drummers will typically appear at 11:30 AM, 12:30 PM, and 1:30 PM in EPCOT (as well as every hour after that until 5:30). 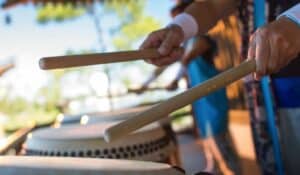 According to Disney, “this group of traditional Japanese drummers performs intricate musical arrangements on giant drums in a dazzling display of pure physical stamina. Japanese Taiko drums have been enthralling audiences for years in religious ceremonies, festivals and even on battlefields as soldiers prayed for victory”. 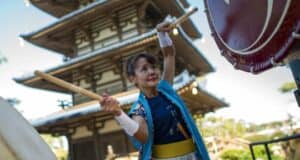 The group shared their excitement about the return online, in the following statement (which was shared by Ashley Carter on Twitter). 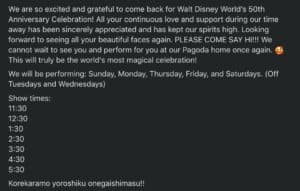 Have you seen the Matsuriza Taiko Drummers before, and been thrilled by their epic and resonant drumming? And what else are you excited to see at Walt Disney World this fall? With all of the new meals, desserts, rides, merchandise, decor, and a live TV special, we can’t wait to experience what’s in store for Disney Guests!