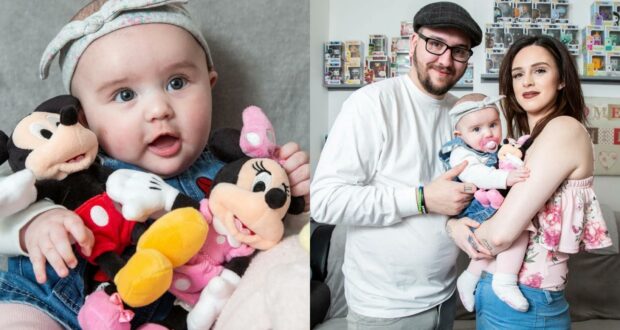 After struggling to conceive for seven years, Jade and Joshua Jeanes were finally blessed with their first child. When their little wish upon a star arrived, they decided to name her “Disney” and received online mockery almost immediately.

“I was just looking through the Disney princesses for ideas,” Jade told the online publication Tyla. “And I saw Belle and thought that would be nice. It’s extravagant, and it’s different.

“After I thought Belle was a good name, I thought, ‘Why not Disney?’

“Then it turned out that my midwife’s surname was Disney so we had a laugh about that, joking we’d name the baby after her.” Well, Disney is what the couple from Somerset, England, decided on. But when Jade shared her now-four-month-old baby’s name on the Facebook Page “Mums the Word,” adding to a post’s comment thread so new baby names could be ‘ranked.’ She said she received harsh backlash from the other mothers, leaving her “heartbroken.”

But the 27-year-old mother responded to the online hate, saying:

“It’s no one’s business what we decided to call her, and I think that’s the way our generation is going to be honest.”

“It’s just a name,” she continued. “There are ordinary names that people give that I don’t like, but I don’t tell them that they shouldn’t give those names. It was more of a fun post that I assumed people would be okay with. In the end, people just either hate it or love it. My husband’s siblings have young children and they like Disney films so she’ll be brought up in a big, happy Disney family.

“She’s a bundle of joy to be around.” Jade hopes that as time goes on and Disney goes to school with kids who will undoubtedly also have unusual names, her name will “blend in,” and she will be spared the bullying her mother received.

“Friends and family love the name, and I do too. I just really like the name Disney,” Jade added. “Disney is quite a personality. Her name suits her and her personality loads.”

Disney is also apparently a Disney fan herself, becoming what her mother describes as “transfixed” on every Disney movie that’s put on the TV. Read More: Enter to Win a Stay at The Villas at Disney’s Grand Floridian Resort & Spa!