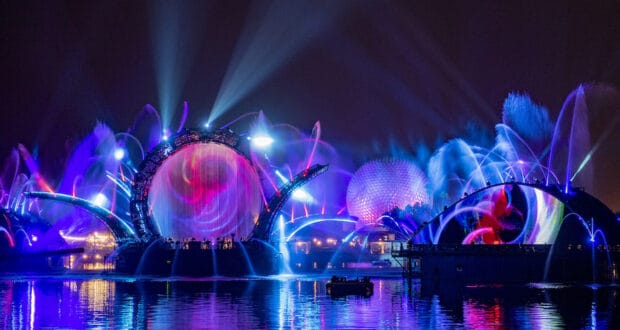 We are ALMOST there! As we inch closer to Walt Disney World’s 50th Anniversary, we are thrilled with all the celebrations and new experiences coming to the Resort with “The World’s Most Magical Celebration” beginning October 1, 2021. While we’re excited that Magic Kingdom will be introducing the new nighttime spectacular, “Disney Enchantment“, we are especially thrilled with what’s coming to EPCOT! We have learned so far that EPCOT’s Space 220 Restaurant will be opening in September and Remy’s Ratatouille Adventure attraction will also be open in time for the 50th Anniversary. Of course, the most highly-anticipated experience coming to EPCOT is the new “Harmonious” nighttime spectacular!

We have been watching the Harmonious progress closely from the beginning when the barges were under construction. As of recently, Disney revealed a first look at Harmonious. We’ve also learned a favorite from the former nighttime spectacular, Illuminations, is staying put! And now, Disney is giving us a closer look at the music we can expect to hear when Harmonious debuts on October 1.

Disney reveals details about the soundtrack for “Harmonious” as it was produced remotely through more than 100 separate recording sessions in nine different countries and five states. In total, nearly 240 musicians, artists, composers, arrangers, cultural consultants, and vocalists contributed to the unique and wholly authentic sound of the show. “Harmonious” takes us on a journey through new interpretations of familiar Disney songs, performed in more than a dozen languages by a cast of talented singers from around the world. Some are recognizable names, either in the United States or their home country, while others are rising stars being heard by a global audience for the first time.

Here’s a look at some of the amazing work that went on behind the scenes to create the music of “Harmonious.”

“Harmonious” opens with an inspiring medley of “How Far I’ll Go” from “Moana” and “Go the Distance” from “Hercules,” performed by “American Idol” finalist and three-time Grammy nominee Danny Gokey and vocalists Elisha Garrett and Ninet Tayeb. The show builds to a finale that unites everyone around World Showcase and from around the world, as many of the musical artists come together to perform a poignant and powerful song, bringing “Harmonious” to an emotional close.

Eek! We simply can’t wait to experience the lights, the fireworks, AND this incredible music to wrap up a perfect day at EPCOT. Are you making plans to visit Walt Disney World for their 18-month long 50th-anniversary celebration? We’ll see you there!