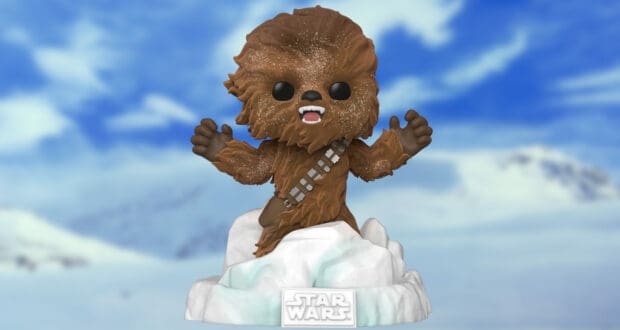 It’s hard to believe Star Wars: The Empire Strikes Back made its theatrical debut 40 years ago in 1980! StarWars.com has been celebrating “Empire at 40” with special interviews, merchandise, and more. The latest items are new Funko Star Wars Pop! Bobbleheads as shared here by StarWars.com.

The new Wampa — part of Funko’s clever Hoth-themed line, “Star Wars: Battle at Echo Base Series,” made to mark the 40th anniversary of Star Wars: The Empire Strikes Back — shows just how far the bobblehead masters have come. The original Wampa, while cute, sports a simple pose of arms down, feet forward, is covered in all-white fur, and has a decidedly square head featuring a more grumpy than menacing look.

This new version isn’t your parents’ — or more likely, older siblings’ — Wampa. Funko’s update of the iconic ice creature reaches out for you with one hand and holds a bone in the other; its fur looks dirty in places, no doubt from the sloppy meals it feasts in its cave; the feet point out asymmetrically, while the layered fur conveys mass throughout, helping define a much more angular and snarling face. If your tauntaun picked up this Wampa’s scent, you’d want to get away. Fast.

In addition to the Wampa, the Battle at Echo Base series features a line of standouts, including an intricately detailed Probe Droid, Han Solo and Tauntaun (and to be clear, it’s not just Han on a Tauntaun — it’s from that scene, in which Han uses Luke’s lightsaber…), a roaring and (brilliantly) flocked Chewbacca, Leia in the command center, and one more yet to be revealed. Each bobblehead comes on a uniquely sculpted base of snow and ice, adding continuity between them.