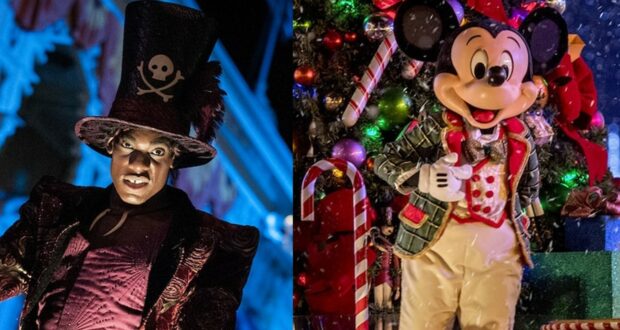 It’s a frightfully fun time to visit Walt Disney World! Even though we haven’t quite turned the corner to September yet, Magic Kingdom is filled with Halloween fun from decor to merchandise, holiday treats, and everything in between. While we may be missing “Mickey’s Not-So-Scary Halloween Party”, Disney has replaced the special-ticketed event with “Disney After Hours Boo Bash“. Reviews are mixed as ultimately Disney fans are missing parades and special fireworks. With that said, that’s not stopping Disney Guests from buying tickets! Disney After Hours Boo Bash is officially SOLD OUT for the season. If you’re still looking to party Disney-style at Magic Kingdom, there is another party coming soon that has event dates wide open. But, is this because it’s too expensive?

“Disney Very Merriest After Hours” will be replacing “Mickey’s Very Merry Christmas Party” this year. While we’re nervous the party will be similar to Disney After Hours Boo Bash, Disney has promised the return of themed fireworks called “Minnie’s Wonderful Christmastime Fireworks” and a special holiday-themed parade called “Mickey’s Once Upon a Christmastime Parade” which will include the favorite toy soldier march and end with the holly, jolly Santa Claus. The special ticketed event rundown as shared by Disney states, “Disney Very Merriest After Hours will take place from 9:00 p.m. to 1:00 a.m. on select nights, from November 8 through December 21, 2021. Ticket holders will be admitted to Magic Kingdom Park as early as 7:00 p.m. on the valid date of their ticket, giving them even more time to enjoy Park favorites before the event begins—including the new Disney Enchantment nighttime spectacular (kicks off on October 1 for Disney’s 50th Anniversary Celebration)! These dated tickets do not require an additional day theme Park ticket or Disney Park Pass theme Park reservation.”

So, what’s the holdup? When “Disney After Hours Boo Bash” was released, there was a scramble to get tickets. Disney’s phone lines were busy and Guests couldn’t get their hands on the event tickets soon enough. Now, even though they have been on sale for over a week, “Disney Verry Merriest After Hours” has yet to have even one sold-out date. Are Disney fans nervous it will be a repeat of Boo Bash? Or are ticket prices just too high for the Christmas party this year?

Party Dates for Disney Very Merriest After Hours Include:

Keep in mind, if you’re visiting Magic Kingdom Park this holiday season, you’ll need to purchase a “Disney Very Merriest After Hours” ticket to see the special Christmas fireworks and holiday parade with Disney characters. These experiences are only available for party-goers and will not be available in the Park during the normal operating day. Disney Very Merriest After Hours tickets are on sale here with a $10 discount if you are a Disney Vacation Club Member and Annual Passholder. Are you planning to join the party and attend “Disney Very Merriest After Hours”? The big question is, is the price worth it for the 4 hours event at Magic Kingdom? Holiday cheer, low attraction wait time, a festive parade, specialty holiday food, and more awaits. With or without a ticket, we’ll go ahead and already wish all you Disney Park fans a Merry Christmas and Happy Holidays!