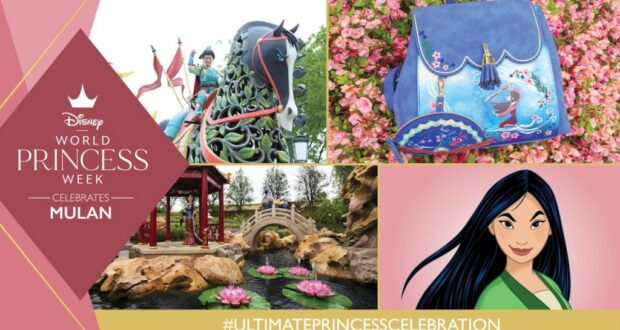 Courage has been one of the two major focuses for Disney’s Ultimate Princess Celebration and international World Princess Week (with the other being kindness), and Friday’s honored princess certainly has courage in spades. Mulan, the strong young woman who disguised herself as a man to enter the army and save China, and who became a “legendary warrior“, was celebrated with a wide variety of shows and offerings this weekend.

The Shanghai Disneyland Resort chose to highlight their Mickey’s Storybook Express parade and to mention the Mulan characters that can be seen in Voyage to the Crystal Grotto. The new live theater show called Mickey’s Storybook Adventure also includes Mulan on stage, and Disney Guests were encouraged to follow up the performance with a meal in the Mulan room at Royal Banquet Hall!

Mulan may have been honored on land, but she was also being honored at sea in “The Golden Mickeys”, a popular Disney stage show that features many of our favorite Disney stories. Mulan’s part in the show includes the crowd-favorite “I’ll Make a Man Out of You”, in which she and her fellow soldiers undergo combat training to a catchy tune with a strong rhythm.

Disney World advertised Mulan’s presence in the Royal Princess Processional at the Magic Kingdom, and in Epcot’s China pavilion within the World Showcase. Meanwhile, at Disneyland, Mulan is being featured as one of the princesses in the ever-popular Disney Princess Breakfast Adventures at Disney’s Grand Californian Hotel & Spa!

Hong Kong Disneyland has focused on its Castle of Magical Dreams this week, since different parts of the castle involve different princesses. and Friday was no different. Mulan’s tower on the castle features cherry blossoms, jade, spears, and the dragon Mushu, her comical sidekick. 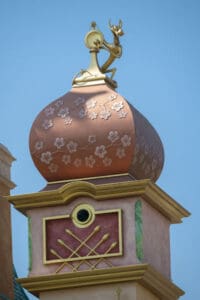 Although Mulan’s day did not include as much limited-edition food as some of this week’s other princesses (especially Tiana, Cinderella, and Moana), fans can still enjoy lots of Mulan-themed merchandise. When it comes to literature, the new Queen’s Council series has been promising, and the next installment is The Queen’s Council: Feather and Flame, which will focus on Mulan’s story with both a retelling and a glimpse into what would happen after her two films!

Disney has also added the next episode to their “Courage and Kindness” series on Youtube, and Friday’s episode honored Mulan. Watch the video below to see Mulan express her perspective on her own story!

Which princess do you think will be next? We’re pretty sure we have a solid guess, since Disney released the following clue: “See you tomorrow as we celebrate another princess, whose nose is often stuck in a book …”!