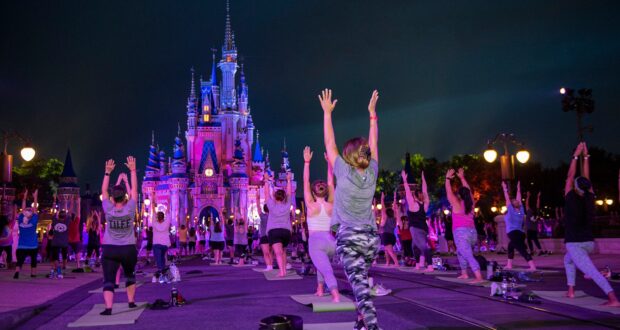 Wouldn’t you love to do some yoga in front of Cinderella Castle before the Magic Kingdom opens? You can, sort of! Sunrise yoga has been available as an add-on for runDisney participants during race weekends for the past couple of race reasons, and it has previously been offered as an exclusive Cast Member event. Sunrise yoga is a light-lifting event in terms of staffing and it would offer notable benefits for Guests in attendance. With Walt Disney World Resort hotel Guest perks lacking as of late, sunrise yoga should be expanded as a resort benefit, with events at all four theme parks. 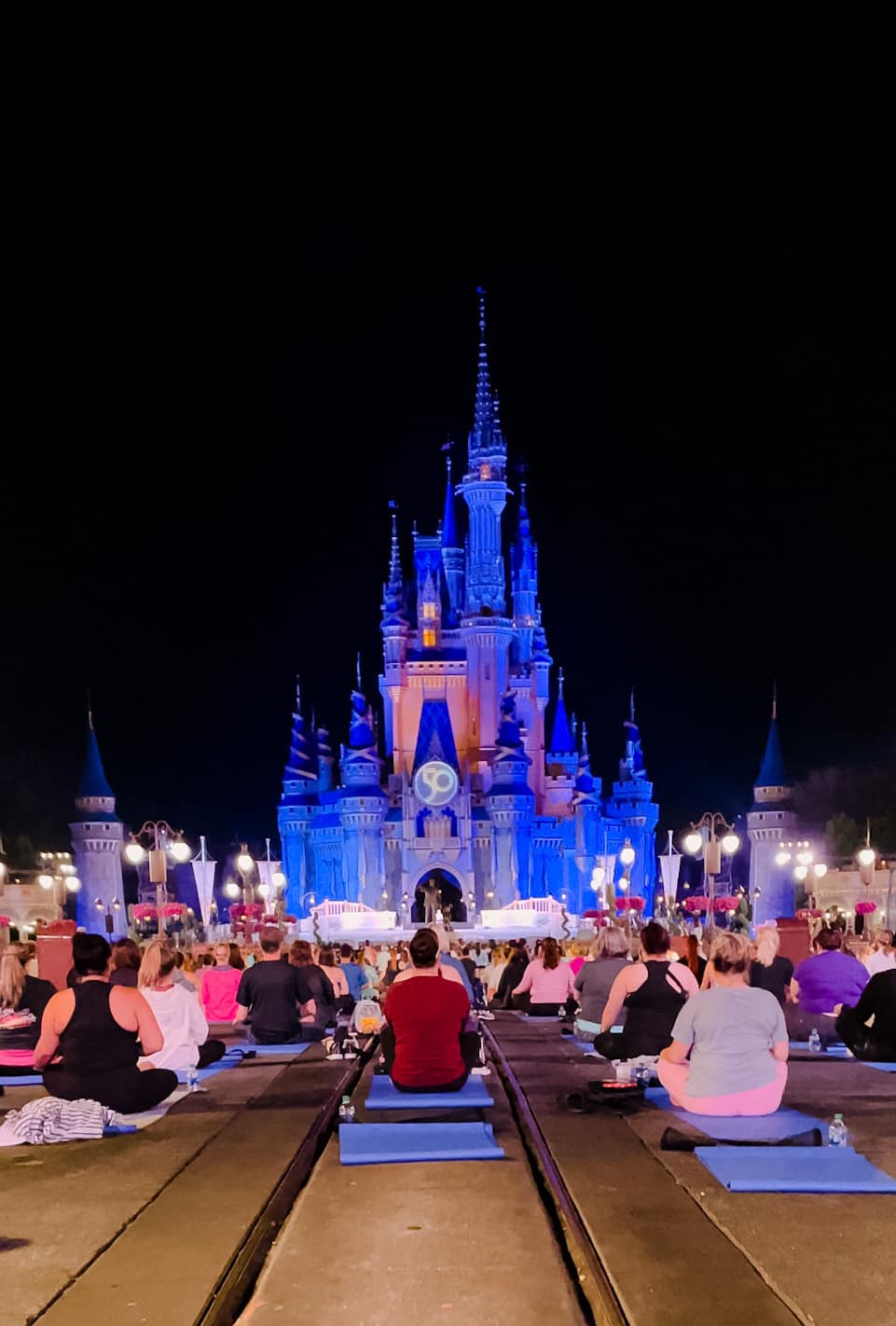 With the removal of Disney’s Magical Express, the changes to the Extra Magic Hours program, only offering half-hour early entry to the parks and evening events limited to deluxe resort Guests, and the continued pause on the Disney Dining Plan, Walt Disney World is in desperate need of perks to entice Guests to stay onsite.

Of course, staffing is still a challenge at Walt Disney World and most other industries still recovering from the COVID-19 pandemic. And surely staffing is a major cause for why so many elements of a Walt Disney World vacation have yet to return to the parks and resorts, so it is understandable why more offerings have not been introduced. 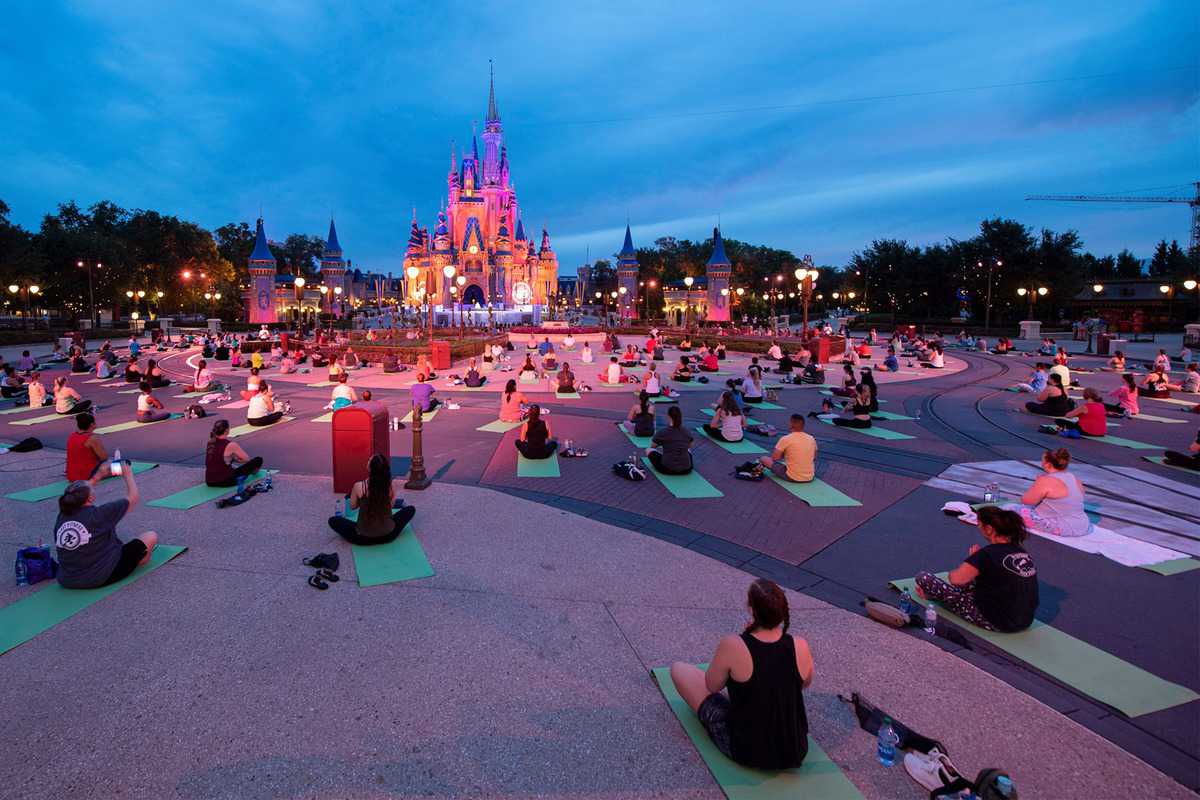 That being said, sunrise yoga would only require minimal additional staffing, so it seems it could feasibly be done if a Disney park were to choose to offer it in the future. With limited Guests in attendance for sunrise yoga in the parks, only minimal staffing would be needed to check Guests in at the main entrance to the park (some Main Entrance operations Cast Members, and a couple of folks from Guest Services.)

Once in the park, with all of the attractions, shops, and restaurants still closed where yoga would run before the park opens, the event would only need yoga instructors and some general Operations Cast Members nearby. While I can’t say for certain without knowing Walt Disney World‘s staffing situation firsthand, it seems like sunrise yoga would be an easy way to add an extra perk for resort Guests without adding much to the current staffing challenge. In fact, I’m sure Disney has all of this down from offering yoga during recent runDisney events like the Disney Princess Half Marathon Weekend. 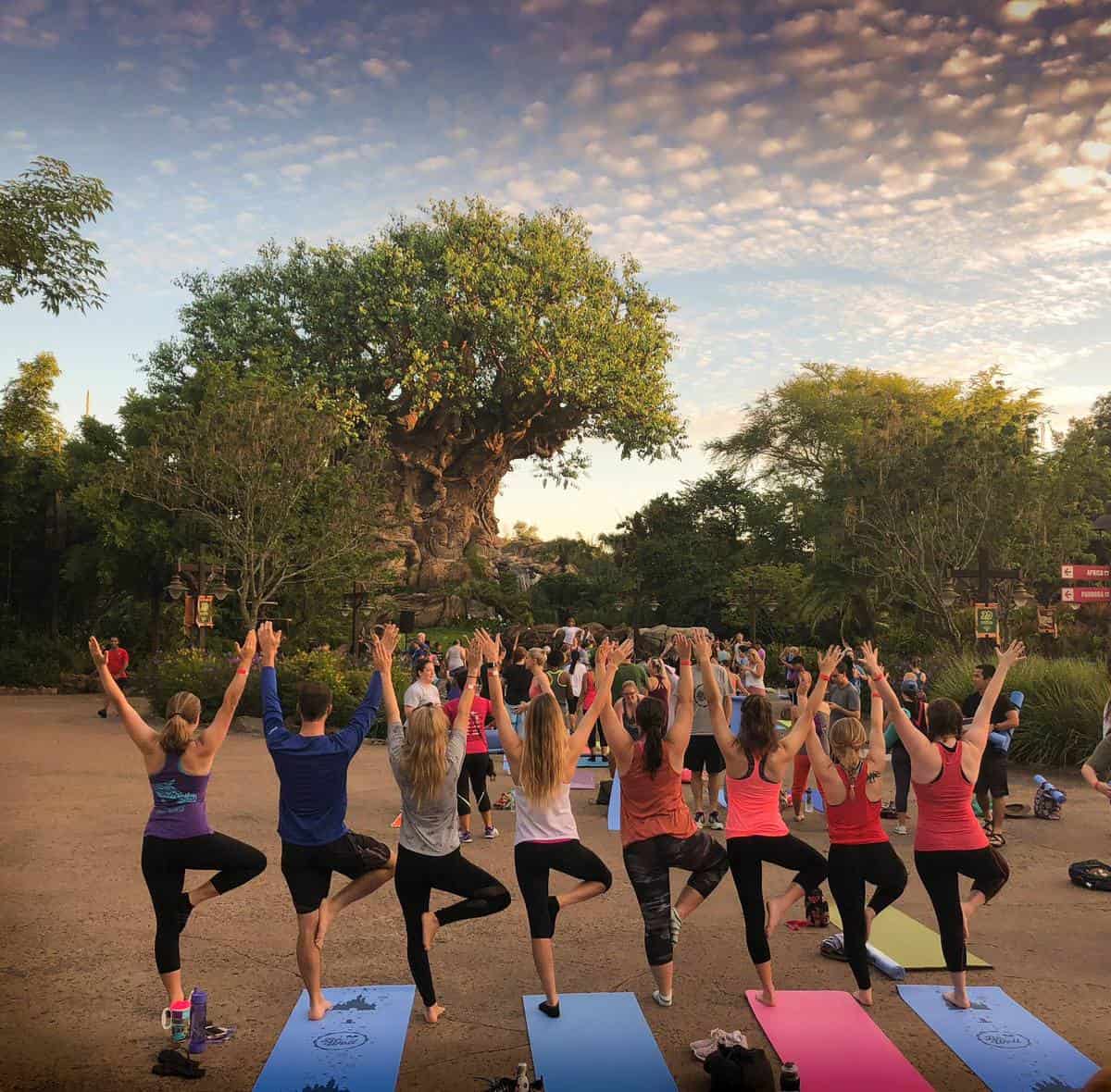 Cinderella Castle is obviously a breathtaking place to be during sunrise, and I would love the opportunity to start my day with a yoga session in the shadow of the Castle, but there are really so many locations around Walt Disney World that would work well for a new event like this.

While other locations may not have the ample space that the Castle hub has, if sunrise yoga were offered more often (maybe even daily at different locations) it could be done in smaller groups in multiple locations. In the Magic Kingdom, I think Fantasyland behind Cinderella Castle and Tomorrowland by Space Mountain would also be great locations to start the day with some stretching and meditation in a magical locale.

Disney’s Animal Kingdom would lend itself extremely well to sunrise yoga. The space in front of the Tree of Life on Discovery Island would offer a stunning view as the sun rises, and I would not complain about having a similar experience in Harambe Village in Africa, Pandora: World of Avatar, and even in DinoLand U.S.A.!

In Disney’s Hollywood Studios, the obvious location for sunrise yoga would be in front of the Millennium Falcon at Star Wars: Galaxy’s Edge. Sunset Boulevard and Toy Story Land would be fun locations, too, but I’m not sure that could beat a morning yoga session followed by a breakfast Ronto Wrap and ride on Star Wars: Rise of the Resistance.

For small group yoga sessions, EPCOT offers so many locations that would be perfect for such an event around World Showcase! With the construction walls currently set up around Spaceship Earth, the front of the park could be a challenge at present, but for an alternate location…what about in front of the Imagination Pavilion or The Seas With Nemo & Friends?

What About Annual Passholders? 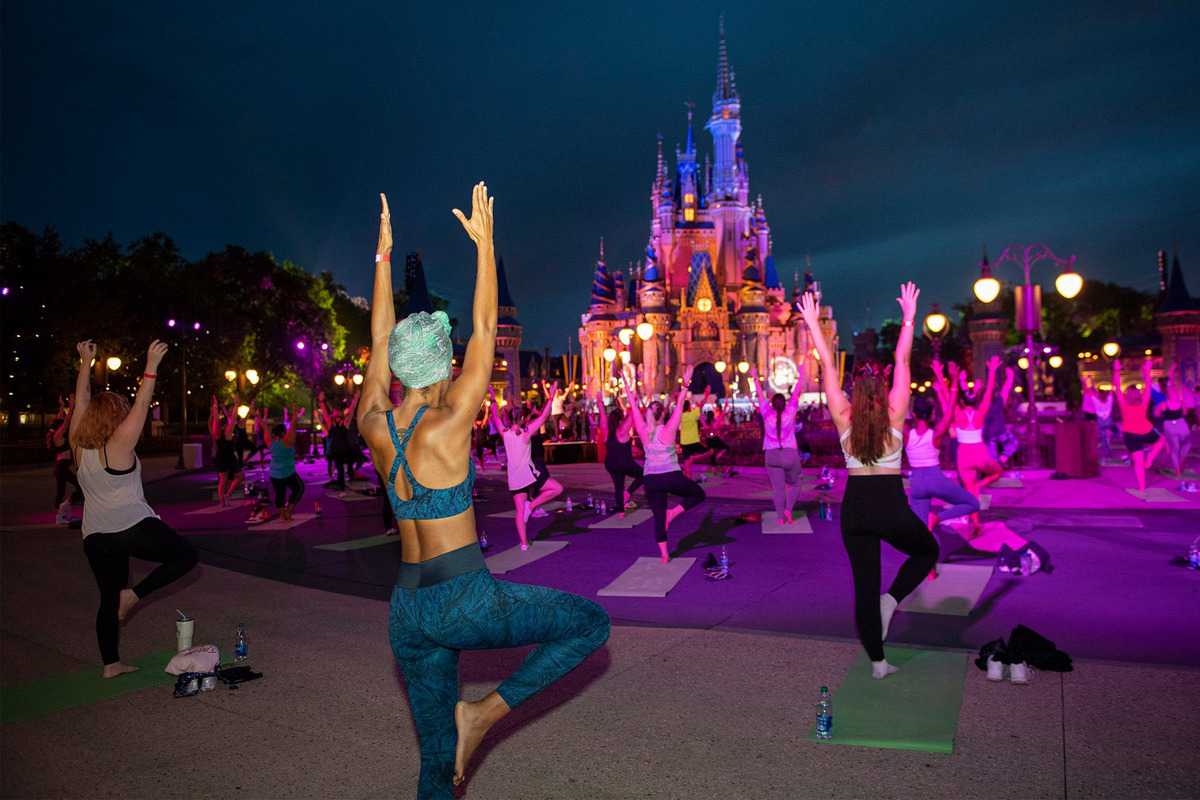 From a marketing perspective, it probably makes sense to hold off on promoting additional Annual Passholder incentives during a time when the resort cannot accommodate new Annual Passholders. When sales of Annual Passes finally resume at Walt Disney World, though, sunrise yoga would be a fun perk to offer Passholders as they return to the parks more regularly.

Of course, there would be more logistics to work out if Disney were to offer sunrise yoga to more Guests, but I think it is totally possible. If the Guests are also required to have valid theme park admission to the park on the day of their yoga session, it makes sense to offer from a business perspective as those Guests would then plan their day around being in that park. And for a value perspective for Guests, Disney could offer yoga mats and additional items like bags or water bottles as has been done with runDisney’s sunrise yoga events. 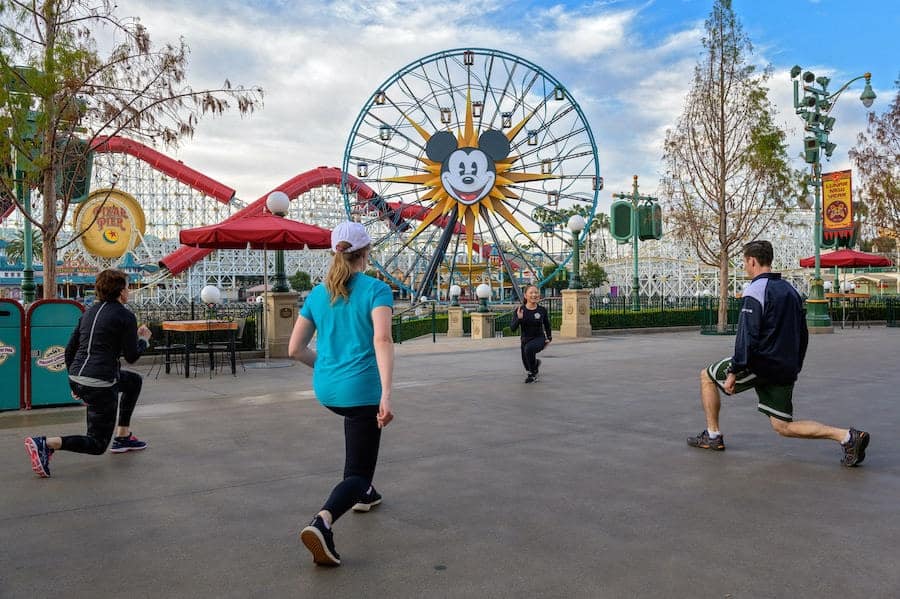 I think so! Disney recently started offering morning exercise classes , including yoga, for Disney resort Guests at Disney California Adventure. These experiences offer resort Guests the opportunity to participate in boot camp classes or yoga prior to the park opening for an additional fee, with reservations required.

It is quite possible that the offerings at Disney California Adventure are a sort of test run to see what the program would be like before it is expanded to other Disney parks. And if it does expand, I will definitely be ready to sign up!

And, Disney has sporadically offered sunrise yoga virtually. During a previous Cast Member event, the yoga session was livestreamed so you could follow along at home. Virtual races are a hit with runDisney for fans who can’t make Disney races in person, and a virtual sunrise yoga event could be similarly popular.