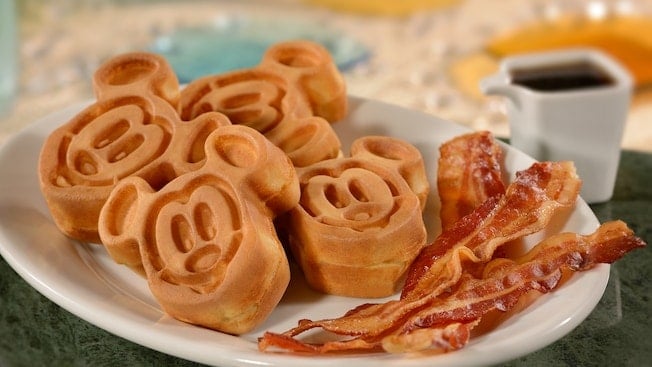 Next up is All-Star Movie Resort’s World Premiere Food Court. To be honest, all of the All-Star Resort food courts are very similar. However, we have to give this one a slight edge because of its awesome theming. The whole place is set up to look like a fancy movie theater, and it just couldn’t be any cuter.

As far as more unique menu items go, we have to admit that the Spinach Artichoke Pasta is actually pretty delicious. We also enjoy the Orange Chicken served on certain days of the week.

Fourth on the list is the Intermission Food Court at All-Star Music Resort. The theme here is, of course, music, and ever since the restaurant’s relatively recent remodel, we have to say the place has been looking pretty classy. We love that Disney characters have been added without taking anything over the top, and the color scheme is lovely.

The food here is a lot of the same stuff you’d find at any of the food courts. However, unique items include some surprising entrees such as Seared Mahi and Ancho Grilled Flank Steak, both of which are surprisingly good.

Finally, there is the End Zone Food Court at All-Star Sports Resort. This restaurant is usually the most bustling of the five, thanks to the sports groups that often stay here. Additionally, we feel the theming is a bit in your face. Still, it’s a food court, and as such, the atmosphere is perfectly fine.

If you’re looking to stray from the usual fast food staples at this food court, we highly recommend visiting during dinner hours. Crab cakes are served on certain nights of the week, and steak and salmon are also options. All three are quite good, and a far cry from a box of chicken nuggets.

There you have it, folks! As you can tell, all five of these food courts have their pros and cons, and while we may favor one over the other, we will happily dine at any of the above. That said, none of these quick-service restaurants is anything to necessarily write home about, and they certainly aren’t worth traveling to specifically. Instead, they are all good places to grab some grub before or after hitting the parks.