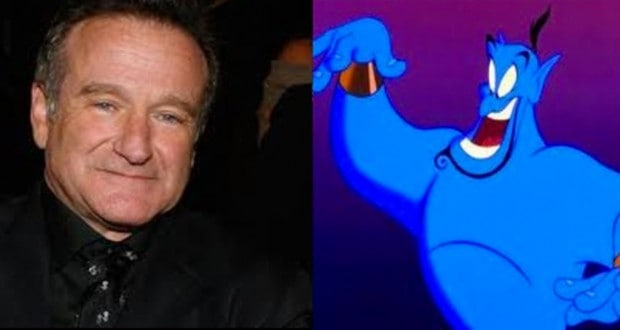 August 11th, 2014, we were all stunned by the news that Robin Williams, one of our generation’s greatest talents, had died. His comedic genius, award winning acting, and larger-than-life personality inspired us all to laugh, cry, and so identify with him. that each of us can’t help but feel a personal loss at his passing. Mr. Williams has given so much of himself to every role he played that it’s difficult to choose a favorite character. However, as a Disney fan, I’ve reflected on his magical vocal talent in Disney’s Aladdin as the Genie, and how he made this mythical character come alive with his humor, improvisation and endearing honesty. So, in an effort to pay tribute to the magnificent talent and life of Robin Williams, let’s take a closer look at his work in Aladdin.

While there’s a mile-long list of ways we can remember Robin Williams, most ’90s kids will always think of him and his role in Aladdin. Early on, Disney had ideas of using Robin Williams for the voice of the Genie. They pictured this man in blue to be somewhat like a transforming, stand-up comedian. Disney animator Eric Goldberg took a few snippets off one of Williams’ comedy albums, animated them with the genie character and then took the finished product to Robin Williams as sort of a sales pitch to see if he would consider being the voice of this character. Their pitch worked wonderfully and Goldberg later stated that watching Robin laugh at the test reel of his animation was one of the great thrills of his life!

What they didn’t expect was how much Robin would give the character. Once Robin got in front of the mic, all the celebrity impressions came out; including Scotty from Star Trek “You need more power Jim” and Nixon “I never did it, I am not at fault!” Co-star Scott Weinger, the voice of Aladdin, remembers how hard it was NOT to laugh when recording! Many takes were ruined as actors and sound crew howled laughing at Robins’ antics.

Animators in charge of Aladdin remarked that Robin’s ability to invest in the emotions of his character, as well as the gags, really made this “buddy movie” the huge success that it was. The camaraderie between the Genie and Aladdin created such stunning chemistry that the movie became an instant hit! Robin continued to work with Disney lending his vocal talents to theme park attractions including the “Timekeeper” at Disney World and “Back to Neverland” as the voice of a lost boy as well as an Aladdin sequel.

In 2009, Williams was inducted into Disney Legends at the D23 Expo in Anaheim, CA. After a lengthy introduction, Williams skipped across the stage beside Mickey Mouse to the podium where he opened his speech with “GOOD MORNING ANAHEIM!!!” His next comment as Mickey exited was that “when she was 3 years old, Mickey was like Brad Pitt to my daughter”… she would go nuts when she saw the famous mouse. His acceptance speech was more like a standup comedy act than the usual thanks for the accolades of his accomplishments. His closing remark was to ask why Donald Duck didn’t have to wear pants!